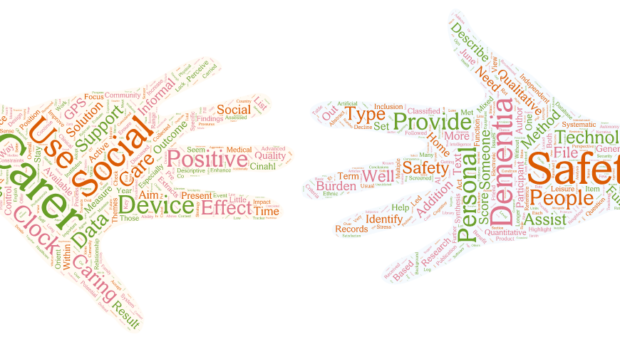 Assistive Technology (AT) includes devices such as electronic medication dispensers, robotic devices, GPS trackers, motion detectors, tablet computers, and wearable sensors. These devices benefit both people living with dementia and their carers:  they allow people living with dementia to remain independent, feel safe, socialize, and do things they enjoy and their carers to provide support, stay in touch, and monitor the welfare of the person with dementia.

As part of our systematic review, we completed a comprehensive search to identify research studies on carers of persons with dementia using AT. We found 56 publications, covering 50 studies, that looked at research from 19 countries. The studies were carried out predominantly in Europe and the USA, with some studies from Australia, Canada, Israel, Japan, Mexico, and Taiwan. Data was collected within these studies by a variety of methods including interviews and focus groups, surveys, video recording, and blog reviews.

The studies involved 2,016 carers, with 1,165 women and 660 men where gender was reported. Carers’ ages ranged from 19-91 years. The carers were from predominantly White backgrounds followed by Hispanic, African American, Asian, and ‘other’ backgrounds. Most of the carers were spouses followed by children and close family members.

There were large differences in the uses of AT, the outcome measures used, and quality of the studies.

84 types of AT were described within the studies. There is so far no agreed way of describing or classifying AT and this makes it difficult to find the right AT for use by persons with dementia.

The AT were mainly used for leisure and social interaction, supporting memory and orientation, and for improving safety and security of the person with dementia.

The most commonly used AT was for safety and security. Passage and door sensors, cameras, and electronic GPS trackers were the most commonly used AT by carers to keep a person with dementia safe at home. The most widely used AT for leisure and social interaction were simple remote controls for TV and picture button telephones. Electronic clocks and calendars that oriented a person to the date, day, and time were also widely used along with electronic medicine dispensers.

AT developers and industry partners should focus on technology that matches the needs of the person requiring the AT.

None of the AT in these studies addressed behavioral issues such as aggression or disinhibition, which is quite common in someone who has dementia. The studies also surprisingly did not report on adverse events.

When AT is used, carers generally appreciated using AT, but their experience of use varied. Carers’ knowledge and acceptance of AT, competence of the carer to use AT, and ethical issues when using AT were major themes that emerged from the studies.

AT in some instances provided carers with additional personal time which was highly valued and there was a consensus among carers that people with dementia must be involved as much as possible to select and use AT.

Installation of AT for use by someone who has dementia is not a one-off event and is an ongoing process. Carers as users of AT often struggle to understand and engage with the AT because of poor understanding, a lack of knowledge of available AT, and lack of on-going support from professionals as well as design flaws in the AT itself.

Carers must be involved when designing, testing, and selecting AT for use by persons with dementia. Consideration should also be given to integrating multiple AT devices to work together.

We recommend the use of a standard person-centered system of classifying and naming AT devices. Healthcare professionals should consider the ability of a carer to ‘problem solve’ before AT prescription and use. AT developers and industry partners should focus on technology that matches the needs of the person requiring the AT, rather than the person being ‘molded’ to match what technology is available, and future research efforts in AT should incorporate a family/carer-centered model. 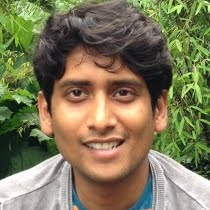 Vimal is an Occupational Therapist and is a DPhil student in Population Health at the University of Oxford, his research focusses on Carers’ Experience of Assistive Technology use in Dementia using a mixed methods approach. For further information about the doctoral research study please visit: https://bit.ly/atindementia