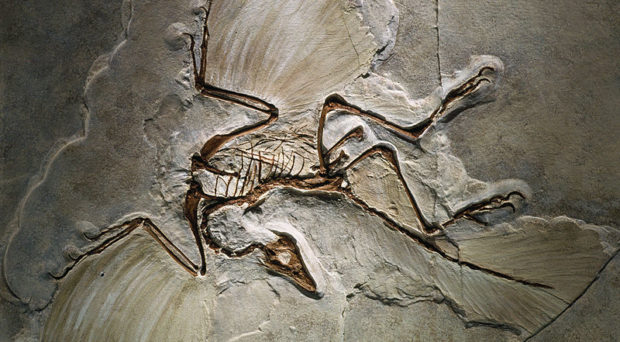 150 million years after Archaeopteryx roamed the earth; this bird-like dinosaur continues to be a source of fascination and debate. For over 100 years following its discovery in 1861, it had been considered the oldest known bird. Two years on from “On the Origin of Species”, the discovery of Archaeopteryx was well timed to provide physical evidence to support the theory of evolution.

Archaeopteryx derives its name from the Greek terms for “ancient” and “wing”, reflecting its status as a touchstone for the evolutionary measurement of newly discovered ancient bird specimens.

However, in recent years, Archaeopteryx has been usurped from its throne as the only known Jurassic paravian theropod, thanks to fossil material found across the globe. Theropods, a subgroup of dinosaurs could be recognised by their three toed limbs and hollow bones. In the late Jurassic era, the paraves evolved to form a clade. Among them, the avialans, are considered closely related to modern birds.

A series of fossils have recently been excavated from the Jurassic Tiaojishan Formation in eastern China. Anchiornis and Xiaotingia are now considered to belong to a clade that predates archaeopteryx, making them the oldest known paravian theropods identified so far.

Archaeopteryx, was originally extracted from the Solnhofen Limestone, found in the German state of Bavaria. Currently Archaeopteryx remains the oldest paravian theropod reported outside of China.

So far, 12 skeletal specimens of Archaeopteryx have been identified.  However a new paper published in BMC Evolutionary Biology, authored by Christian Foth and Oliver Rauhut, has cast doubt over the identity of one specimen currently located at the Teylers Museum in Haarlem.

The authors then go further, proposing a new genus Ostromia, of which the re-evaluated Haarlem specimen forms the species O. crassipes.

The ‘Haarlem specimen’ comes in two pieces, with two separate parts of the same slab displaying the presence of feathers and bone markings including well preserved gastralia and feet. Overall, however, the Haarlem specimen is one of the least complete archaeopteryx specimens identified so far.

As a consequence, Foth and Rauhut conducted a re-evaluation of the Haarlem specimen, using osteological analysis to conclude that a closer evolutionary relationship to the Chinese Anchiornis was more probable. The authors then go further, proposing a new genus Ostromia, of which the re-evaluated Haarlem specimen forms the species O. crassipes.

While not as old as its new Chinese relatives, the proposed new identity of the specimen provides clues on the distribution of species in the late Jurassic era. The authors argue for a radiation and dispersal of maniraptorian dinosaurs (including avialae) from eastern Asia. The high dispersal potential may have resulted in the evolutionary success of these species, particularly avian theropods: the ancestors of modern birds.

Tom is an Assistant Editor at the BMC series. Before joining BMC, he completed a BSc in Molecular Biology at University College London.