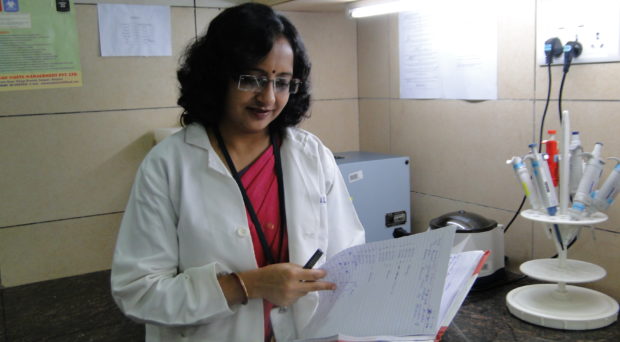 Tell us a bit about yourself

I am a public health specialist and presently the Director of International Institute of Health Management Research (IIHMR), Delhi. I have a rich experience in public health and I am particularly interested in implementation of epidemiological and clinical research based projects centered around Maternal and Child health with great relevance to national policies and programmes.

My goal is to mentor students and young professionals who can be the change agents in future – those who can see through problems directly or indirectly impacting health, explore them scientifically, and engage in advocacy. I seek to nurture researchers and bring people together who could be effective linkages between disciplines, generate synergy between research and programs and promote interdisciplinary research in the country.

How does your work relate to the SDGs? Which SDGs specifically?

Anaemia during pregnancy increases the risk of maternal and perinatal mortality. It contributes to low birth-weight infants (birth weight less than 2500 grams), who are prone to deaths and diseases while they are young. Such babies are prone to chronic health problems such as diabetes and heart disease later in life.

Target 2.2 of SDG states that by 2030, end all forms of malnutrition, including achieving, by 2025, the internationally agreed targets on stunting and wasting in children under 5 years of age, and address the nutritional needs of adolescent girls, pregnant and lactating women and older persons. The WHO global targets call for a 50% reduction in anaemia in women of reproductive age by 2025 relative to 2010 prevalence. Anaemia affects more than 50% of pregnant women in India.

Anaemia during pregnancy increases the risk of maternal and perinatal mortality.

The key modalities towards reduction of prevalence of anemia include accurate diagnosis and institution of proper treatment. Several modalities for diagnosis and treatment of anaemia exist. For instance, oral iron has been a part of national program in India for decades with no major impact. Parenteral iron came to the aid of practitioners who were looking for a viable alternative for management of anaemia in pregnancy. However, it could not be included in the national programs due to paucity of reliable evidence on its effectiveness. This gap paved the way for designing and implementing a randomised controlled trial to assess the effectiveness of parenteral iron sucrose compared to oral iron during pregnancy. The study was supported by WHO, India on the request of Ministry of Health and Family Welfare. This trial on more than 2,000 women in a pragmatic set up has been the largest ever trial on anemia in pregnancy, not only in India but in the world. The findings resulted in high impact publications that have been instrumental in bringing about an amendment in the national policy. (1, 2, 3, 4)

For diagnosis of anemia, several invasive and non-invasive devices are in circulation. However, in the absence of robust evidence on efficacy and effectiveness, a country-level policy decision could not be taken. A need was felt to identify an accurate and cost-effective point-of-care device. We conducted Health Technology Assessments on such devices in community settings in collaboration with medical colleges, supported by Department of Health Research, Ministry of Health. The assessment included diagnostic accuracy when used by the grassroots-level functionaries in different weather conditions, operational issues, cost factors and scalability. The findings have helped in revising the national guidelines. (5, 6, 7, 8)

These studies have been instrumental in guiding policies at national, regional and global levels.

What challenges have you faced in your research? How did you work to overcome these?

In busy medical colleges, getting hospital staff to get involved in research is quite difficult. Research staffs recruited specifically for the study were also simultaneously engaged in routine hospital work, thus sometimes trading-off with their roles in the study. It required a lot of motivation to support studies where regular hospital staff do not get any direct financial or tangible benefit. Needless to say, hospital staff play an important role in such type of clinical studies. Though their salary structure was guided by the Government norms, which was less than their expectations, the frequent dialogues and get-togethers with the core team throughout the study duration ensured that they remained motivated and committed towards their respective roles in the studies.

Follow up of patients was very critical in these studies but was not very easy as women in India normally visit their parents’ house during birth or give birth at home or in private set ups, rather than in hospitals where they can be monitored. Counselling by the research staff reduced the attrition rate to less than 5%, which otherwise could have been higher.

Ultimately it is sheer perseverance and grit that is needed to complete any research study successfully.

We undertook the trial when ethical guidelines for conduct of clinical research, particularly trials, were undergoing extensive revisions in India. Frequent changes and lack of timely communications to the medical colleges for some period of time created communication gaps and misunderstandings at all levels. Amidst this confusion, the Ethics Committees also remained indecisive on certain matters, thereby extending the duration of the trial for several months with obvious ramifications in terms of smooth conduct of the study, retaining trained staff, staff attrition and exceeding overall budget of the study.

We were constrained by the budget and hence could not provide additional staff that the hospital wanted. Moreover, the contractual agreements were made for defined time periods and extensions were granted only after all official formalities were over. This led to several breaks in the contracts and we had to devise our internal arrangements to take care of the operational expenses.

Conducting a clinical trial spanning a period of ten years came with its own share of operational difficulties. I vividly remember the days when all the research staff came over demanding for a hike in their salaries. This was compounded by wastage of resources as the trial was halted and extended. Other challenges like study sites reporting about increased workload, the team falling short of meeting the timely deliverables to the Ministry, constraints in formalizing agreements with the state government who had generously supported the study, institutional pressure to recover the funds obtained from internal resources, etc. were encountered during this journey. There were differences of opinion within the team at multiple stages throughout the duration of the trial which, though resolved eventually, added to the many impediments which I had to face as a researcher.

Working on these projects has been a Herculean task in the true sense. However, the constant encouragement of Technical Advisory Group and senior faculty members of our Institute helped us to reach a successful conclusion. No wonder, this project has taught us many things which no textbook can ever match. Ultimately it is sheer perseverance and grit that is needed to complete any research study successfully.

What does success in achieving the SDGs look like in your field of research?

India is committed to address the problem of anemia. The flagship program of the Prime Minister, Anemia Mukt Bharat (Anemia Free India), is a testimony to this effect. With a great thrust emanating from political commitment and backed by strong evidence, the whole process of planning and programming for anaemia and its implementation has undergone radical changes. I am sure the momentum thus gained will go a long way in addressing the problem of anemia in the country.

Dr. Sutapa B. Neogi is Director and a public health specialist actively engaged in research and teaching at International Institute of Health Management Research (IIHMR), Delhi. She is MBBS from NRS Medical College, Kolkata, MD in Community Medicine from PGIMER, Chandigarh and DNB in Maternal and Child Health. She has a rich experience in public health and is particularly interested in implementation of projects that is relevant to national policies and programmes. She has authored several research papers and is a reviewer of many national and international journals. She has written a Book titled “Gender before Birth in India (Role of Indigenous and Traditional Medicines)”, published by Springer. She has been recently conferred with “Best Women Researcher in Public Health” award for her outstanding contribution in the field of public health by GISR; “Most Inspiring Women Leaders Award” for Nurturing Researchers to Transform Healthcare by TradeFloc and “Healthy India Health Ambassador Award” by Swasth Bharat Trust on National Doctor’s Day, 2022 for her outstanding contribution in the field of public health.