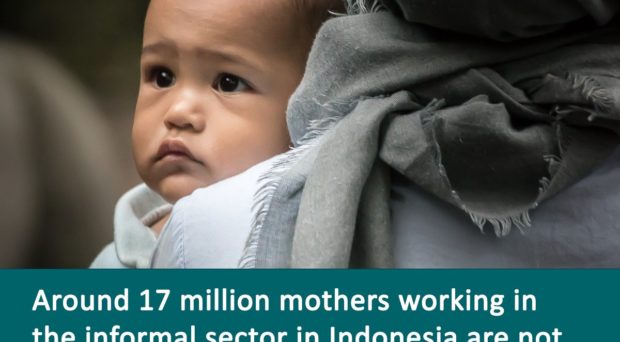 New research reveals that the annual cost to provide maternity cash transfers to women working in Indonesia’s informal sector would be a worthwhile investment. The financing need would be below 0.5% of the country’s 2018 nominal GDP, significantly lower than the current annual cost of not breastfeeding in Indonesia – estimated at $USD 9.4 billion, or approximately 1% of the country’s 2018 nominal GDP.

The research, conducted by Alive & Thrive, Yale School of Public Health, CEDS Universitas Padjadjaran and EQUIDE, and published in International Breastfeeding Journal, focuses on potential benefits to around 17 million working women of reproductive age (15–49 years) in Indonesia who are employed informally.

..health and economic costs of not breastfeeding, roughly US$1.5–9.4 billion annually

Maternity leave has manifold benefits: entitlements are associated with gender equity as well as higher breastfeeding rates in low- and middle-income countries, and provides broad social, developmental, and health benefits for working mothers and newborns. Providing paid maternity leave for working women may improve maternal-child physical and mental health and family wellbeing, and increase women’s participation in the labor market.

Despite breastfeeding-friendly policies in the country, including three months of paid leave for formal workers, lactation rooms at workplaces, and restrictions on breastmilk substitute marketing, there is a lack of breastfeeding support for women in the informal sector. This demographic makes up 52% of the country’s female workforce, leaving most of Indonesia’s women workers unprotected, with significant effects. Only around half of all Indonesian children under 6 months were exclusively breastfed in 2017, leading not only to high economic costs but also as many as 7,000 annual deaths among mothers and infants.

The research estimated the financial costs to implement a hypothetical cash transfer program, which would guarantee income for mothers in the informal sector during maternity leave, alleviate the unfair burden of choice between breastfeeding and income security, and allow them to meet breastfeeding goals more easily. Our method, based on the modified World Bank methodology by Villar-Compte et al, followed established steps to estimate costs using national secondary data. Estimations demonstrated the program may cost around US$1.3 billion annually (US$1,131/mother per year). The low program cost, when compared to upper estimates for Indonesia’s cost of not breastfeeding, demonstrates the importance of investing in programs to support maternity leave and breastfeeding.

there is a lack of breastfeeding support for women in the informal sector.

However, challenges remain: budget constraints, suboptimal policy implementation, a strong formula milk market, lack of lactation rooms, local cultures that may hinder breastfeeding, and concerns about the trade-offs between income and maternity leave, must be addressed to devise an effective and realistic strategy to implement and enforce the cash transfer program. 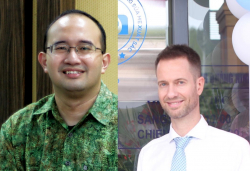 Adiatma Y.M Siregar is a lecturer and researcher from Universitas Padjadjaran, Indonesia, currently serving as the Director of Center for Economics and Development Studies (CEDS) under the university.His research interest is mostly on economic evaluation, focusing on issues related to HIV and AIDS, breastfeeding, and mental health.

Roger, based at Alive and Thrive, is an international nutritionist with two decades of experience working in non-governmental organizations, the UN, academic institutions, and the private sector. At A&T, he provides program and technical leadership, management, and coordination of A&T activities across Southeast Asia.