You may have heard the term ‘sitting is the new smoking’. Whether this might seem exaggerated, or like comparing apples with oranges, there is actually some truth to it.

A landmark study conducted among men aged 35-64 who were employees of the London Transport Executive during the 1950s found that drivers had a higher risk of developing heart disease as compared to conductors.

Since then there has been accumulating evidence suggesting that with prolonged sitting, we raise our risk of developing metabolic disorders such as type 2 diabetes as well as cardiovascular disease.

This is a major concern, as in this era where physical activity is commonly being engineered out of daily living, we can actually spend a day without getting up, and this is especially obvious amongst those who work in an office setting. People spend hours sitting at their desks answering emails, writing reports or participating in conference calls.

I am sure we are all well aware that having little physical movement (sedentarism) is not the best thing for our health and we actually do experience some unfavourable outcomes, reflected through diminished concentration and feelings of sluggishness, especially towards the end of the day.

Why is this so? When sitting, the body lowers its rate of metabolism and changes the way it processes things. Fat storage is increased, insulin secretion is increased and insulin sensitivity is decreased. Even the structure of the blood vessels changes, as well as blood pressure.

Compare this to smoking. If we see someone smoking, we can immediately envisage the harmful effects tar, carcinogens and nicotine have on the body. Prolonged sitting is affecting the body just like smoking. The only difference is that it is silently and slowly damaging our health without us realizing it. Now that is scary!

But is it possible to cancel out the harmful effect of prolonged sitting by binge exercise? I am guilty as charged. I can sit for 8 to 10 hours a day and then do aerobic exercise for an hour to balance the bad and good. A study has found that a person needs to exercise at moderate intensity for at least 60 to 75 minutes a day to only mitigate some of the adverse health effects that come with sitting.

Simple measures, such as standing while talking, are a very good start.

To be honest, that is a lot of exercise. It is also very crucial to understand that exercise can only reduce the harmful effects of sitting and no matter how much exercise we do, we can never undo the harm of sitting.

Therefore, sitting and physical activity have to be treated as two distinct entities with different health outcomes. While keeping our schedule to meet the recommendation for healthy adults to regularly perform 150 minutes of moderate-intensity or 75 minutes of high-intensity exercise a week, it is just as important to figure out ways to break up periods of sitting and make a conscious effort to change your pattern of sitting.

Simple measures, such as standing while talking, are a very good start.  Another potentially effective method is the use of technology to reduce sedentary behaviours. For example, you can get an app that buzzes when you have been sitting too long. Walking while having a meeting as well as standing while you are answering the phone are some other simple effective measures that can be made at the workplace.

The ongoing MiSSFiTT@UMMC trial at the Department of Sports Medicine, University Malaya Medical Center, Malaysia is investigating the effect of incremental increases in exercise to 150 minutes per week and incremental increases in steps to 10,000 per day on fitness level, body composition and exercise-related behaviour among women at the workplace. Researchers hope that the results will facilitate more informed workplace interventions and strategies to increase physical activity and fitness levels among the workforce.

In conclusion, making a habitually active lifestyle in the workplace is just as important as keeping up to a regular structured exercise. The American Heart Association recently held a consensus meeting based on the current body of evidence and made the  recommendation to“Sit less, move more.” Khasnur Abd Malek is a Family Medicine Doctor working at the Faculty of Medicine, Universiti Teknologi MARA Malaysia. Her main interest is to innovate ways to initiate and maintain physical activity to tackle the growing numbers of chronic diseases. 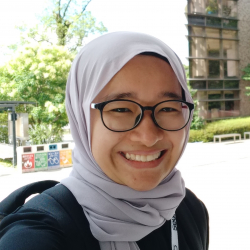