It’s over three years since the conflict in Syria began. With people dying daily, crucial services and support systems disrupted, and challenges in providing international aid, the health and welfare of millions of people hangs in the balance. In this guest post for the journal Conflict and Health, Joseph Fitchett and Lalitha Bhagavatheeswaran, Director and Coordinator (respectively) of the Global Health Film initiative, write about how a new film can help us to recognize the challenges faced.

Recent UN reports estimate 9.3 million people are in need of assistance in Syria. There are 6.5 million internally displaced persons, and over 100,000 people killed since the start of the conflict in March of 2011.

In a relatively short span of time the health care system in Syria has crumbled. With government restrictions on aid agencies working inside Syria, how is this conflict different than any before in the region? Can aid organizations develop different approaches to provide aid, shelter, and health care to those most in danger or are they failing to adapt to the present and ever changing context? How will the conflict affect health systems in neighbouring countries and what are the repercussions for the population in years to come even if the fighting stopped today?

These questions are challenging and difficult to answer without fully understanding what the situation is and without seeing what is happening inside the country. However, through documentary film, we are able to see raw footage and hear from those being directly affected.

Film has the power to communicate stories, to stir emotions, to inspire, to encourage action and to redress inequities in health. It is through the documentary film ’Aleppo: Notes from the Dark‘, that we were able to get a glimpse of the Syrian conflict.

As we watched, bullets were fired, bombs blasted, and people were killed. Our hearts raced as though we were right there and in danger. However, we all sat quietly watching in a protected building in safe country miles away. This was no movie. This was real life for Syrians. 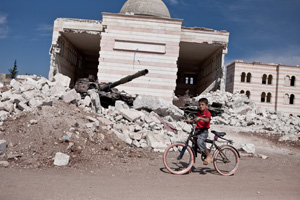 Aleppo: Notes from the Dark

“Death often comes in the cover of night.”

The opening line from Aleppo: Notes from the Dark shines a light on the daily struggle of a city suffering from the devastating consequences of the Syrian conflict. The documentary by Polish filmmakers, Michal Przedlacki and Wojciech Szumowski, follows ordinary people affected by extraordinary despair.

Fighting in Aleppo started in July 2012. Unidentified bodies are buried in parks and squares, a daily reminder of the city’s lost ones. There are now 2.5 million refugees, and 1 million at risk of starvation. Reports of chemical attacks on Syrian citizens have only deepened the crisis further. Once famous for its mosques, large mansions and souqs, much of Aleppo is now rubble and dust.

The film follows seven residents on the frontline of the conflict. Before the fighting, these men were selling vegetables, repairing phones and selling women’s clothing. Syria is now a nation of soldiers. The people are exhausted and haven’t slept soundly in two years.

“I am a man who sees death every day. I have just one wish: let’s end the bloodshed”. These are the words of Dr Ammar Zakaria who risks his life every day to stay in Aleppo and treat injured civilians and rebel fighters in a makeshift field hospital.

“You can try to save a human being, if only one,” he says. His wife and child are in Turkey, just 50km away, living with his parents. His father was one of 4 leading soldiers who defected from the Syrian army and are now in refuge.

Dr Zakaria was once a Syrian officer and asked by the army to kill a patient on the intensive care unit. The experience catalysed his move away from the Syrian regime.

Despite the ongoing violence, faith is strong. But Imam Qasim Hajj Qasim, priest of the people, iterates that “hunger took hope away” from the community. Through support of a Czech NGO called People in Need, he provides bread to the poorest in Aleppo along with Abu Mahia. 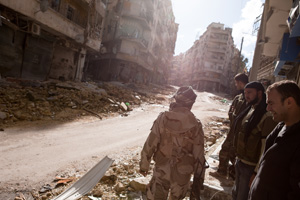 The film follows three other men, who are actively involved in the resurgence. Majid Fleyes is commander of the Center Front, which oversees Karaj al Hajis – a busy passageway for civilians lodged between districts controlled by the current Syrian regime and those in opposition.

Abu Haidar is squad leader of the Islamic Doctrine Fighters Movement, an affiliation of the Jabhat al-Nusra, a branch of Al-Qaeda operating in Syria and in Lebanon. The group has been designated a terrorist organization by the United Nations, the United States and the United Kingdom. In a previous life, he sold women’s clothing and it is through war that he turned to religion.

Abu Ahmed is an insurgent with the Free Syrian Army and one of many men joining the fight. “When it’s over, we will rest,” he says. All his sons were shown holding guns. One proclaims: “I don’t have any dreams, I wish my dad to live in peace”.

There is no free press in Syria. Foreign journalists are not allowed in. Documenting the struggle is left to the people.

“Journalism is my duty, but it is not my profession”, states Mohammed Sayeed, who previously sold mobile phones in Aleppo’s busy markets and is now a journalist at the Aleppo Media Center. Observing dozens of citizens scouring the wreckage of a bombed residential block for survivors, he asks: “What to do? Should I stop filming to help?” The atrocities are too great, however, and film is evidence.

Nothing is spared in Aleppo, and military sites are not the only target. “Death comes from the sky, unannounced”.  Footage shows what is left after the bombings: a school for girls, an evening marketplace, residential homes.

Crossing the street can be fatal as snipers line the rooftops. Karaj al Hajis is the 21st century Alley of Snipers. However this remains one of the busiest marketplaces of Aleppo where individuals are protected by numbers. Even cats scurry across the roads of Aleppo. Rescue sites are treacherous at best for the overstretched paramedic services. 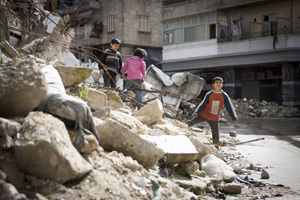 Filmed over two months, the film feels like an eternity. Each district has its problems. A missile strikes a school in Ansari district, killing 18 people. Al-Fardos has no power. Al-Shaar has no water. People are leaving districts in search of wells. In some districts, bread comes only every six days. People are dying slowly. For some, “the struggle of everyday life is worse than death”.

What is consistent throughout the discourse of the film are the references to the involvement of Hezbollah, Iran and Russia. Whether these reports are verifiable remains unclear, however it is a reminder that this is not just a Syrian conflict.

What can the international community do? According to the filmmakers, Syria needs the following three changes. Firstly, an honest story, to redress the weight of misinformation. Secondly, solidarity, as seen with the fall of communism in ex-USSR. And thirdly, an Arab League peacekeeping operation, to stop the fighting.

Is the film one-sided? Yes, and intentionally so. Aleppo: Notes from the Dark is “a protest against a civilisation of indifference” and a feeling of atonement resonates throughout. This is the contribution of two people to document the raw struggle of daily life in one of the world’s most devastated cities. They ask of us, the audience, to watch, share and reflect on the film and consider our own society’s struggle with indifference. We cannot remain silent.

‘Aleppo: Notes from the Dark’ was screened at the Frontline Club on April 24th 2014. You can view the film trailer and visit the website.