One Friday afternoon in March 1993, I decided to address one last task so that my frustrating week might end with a one accomplishment. I’d promised a colleague I’d identify his Aspergillus from a fungus-growing (attine) ant nest from Trinidad. The colony colour suggested Aspergillus terreus, an easy ID, five minutes tops. But when I looked through the microscope, I slid down a rabbit hole.

The flask-shaped cells covering the swollen vesical belched out chains of spores, as expected from Aspergillus. But the fungus broke too many rules. We taught students that Aspergillus stalks were unbranched, but this had multiple arms jutting out like side lamps of a Sputnik chandelier. We taught students there were no cross-walls in Aspergillus stalks, but this had two septa below each head. The stalk fractured there and the whole head floated off like the fungus was decapitating itself. I started drawing (in these days before digital cameras), and made prep after prep trying to understand what I saw. Two hours later, I looked up and realized I was late for supper. I transferred the fungus onto a fresh Petri dish so I’d have fresh growth next week.

On Monday, instead of spreading as a dense radial colony like a respectable Aspergillus, the fungus filled half the plate with what looked like a spider web. Under the dissecting scope, hyphae arced across the agar like stolons of a strawberry plant. Rhizopus uses this bouncing growth trick, but it’s rare in fungi. This was no Rhizopus, but no Aspergillus either.

I faxed a drawing to my former PhD mentor (in these days before email), an authority on Aspergillus. He replied: “I’ve been looking for this for 30 years.” An 1893 illustration by the German mycologist Alfred Möller documented it in leaf-cutting ant nests in Brazil. Möller illustrated another species with elongated vesicles that looked like sausages. It was rediscovered in 1970 by an East German mycologist working in Cuba. After some taxonomic and nomenclatural hocus pocus, science had Escovopsis weberi as a name for the sausage-like species. We described ours as the second species, Escovopsis aspergilloides. 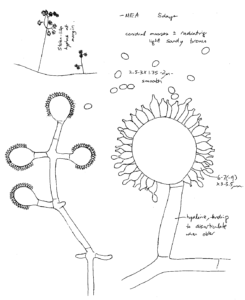 To taxonomists these were new species, but to ecologists the news was a century old. Highly-socialized, neotropical attine ants are famous for their gardens of mushroom mycelium that feed their Queen and her colony. Some ants strip leaves from plants and masticate them into compost for the vast underground colonies, causing despair to farmers from Brazil to the southern US. This predates human agriculture by tens of millions of years.

Escovopsis co-evolved with the fungus-cultivation system. Minims sometimes weed it out after it leap frogs into colonies, or seal off overgrown nest chambers. If balance is not restored, half the colonies built by a single ant species can turn to mush.

When I was drafted into Escovopsis taxonomy, several labs were studying attine ant ecology and researchers sometimes behaved like soldier ants attacking competing nests. Several additional species were described by taxonomists recruited by rival teams. The mycologists knew each other and were bemused by the insistence that they not distribute cultures. Most species were represented by just one strain. Building a taxonomy based on single specimens of individual species is like trying to build a coherent image one pixel at a time. It’s unsurprising when species and genus concepts wander around and illusory relationships are postulated, like mirages in a desert.

A few of us mused about uniting the Escovopsis community at a workshop at the 2018 International Mycological Congress (IMC10) in San Juan, Puerto Rico. We would promote a common taxonomic approach to what looked like a large and morphologically adventurous genus. But our diplomatic effort was unnecessary. While lobbying for the workshop, we heard about a Peruvian student who’d gathered hundreds of cultures from diverse ecological and geographical sites.

The workshop didn’t happen. But as I sat alone preparing for my last moments on the IMC podium, a shy young man introduced himself as Quimi Montoya (a former PhD student from UNESP – Rio Claro, Brazil). He asked if it was a good time to talk. Escovopsis seemed much more interesting than anything I might say to the delegates. He pulled out his laptop and we spent the next 45 minutes on a wonderful journey though the glorious molecular and morphological diversity of Escovopsis.

The high-level view of Escovopsis, now divided into several genera, is on display in his recent paper in IMA Fungus. A full scale monograph with many more species awaits. At last, the taxonomy of Escovopsis is catching up with its ecology. I thank Quimi and his colleagues for that, and expect interest in this complex multi-kingdom symbiosis to continue to expand after their efforts. 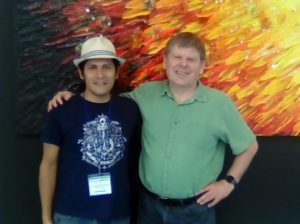 Keith Seifert, formerly with Agriculture & Agri-Food Canada, Ottawa, is Past President of the International Mycological Association. His book 'The Hidden Kingdom of Fungi' will be published by Greystone Books in May 2022.