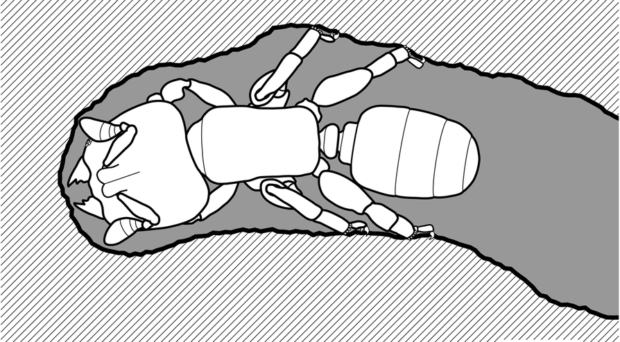 Schematic of ant worker chewing a tunnel using their specialised legs to brace themselves against the walls while tunnelling.

Thousands of ant species live in trees but they often nest in existing cavities (provided by host trees, or excavated by beetle larvae). Only a few species can chew dry wood, or build nest structures outside trees. Melissotarsus workers are exquisitely adapted for chewing tunnels in living wood, and this underlies their obligate mutualism with scale insects (Diaspididae). These minute ants (2 mm-long) have enlarged heads packed with muscles to open and close the mandibles during chewing. Cuticular structures (‘apodemes’) function to capture muscle fibres coming from a variety of angles and filling all available space in the head.

Insects normally require little power to open the mandibles, so there is a strong asymmetry in size between closer and opener muscles. However, opener muscles are exceptionally large in Melissotarsus, because workers need to move away crushed woody tissues as they tunnel forward. Moreover, the modified shape of their mandibles amplifies the force from muscles through lever effects. And their tip is reinforced with nanoscale clusters of zinc bound into the chitin matrix.

Powerful chewing is associated with novel specialization of the four hind legs, with extremities that are modified to brace against walls while tunnelling, and enlarged muscle-filled basal segments (‘coxae’). These leg adaptations are so extreme that workers cannot walk outside their tunnels, giving us reliable information that they completely rely on the diaspidid scale insects inside their tunnels for food. Moreover, the forelegs are very hairy, an adaptation to spin the silk that is produced by glands inside the head. Breaches in tunnels are repaired using silk combined with wood shavings. Melissotarsus workers have lost their sting during evolution, and silken constructions are their only defence against insect enemies (especially other arboreal ants) that readily invade damaged tunnels to pillage brood. Because workers begin repairs as soon as we open tunnels with a knife, direct observations of wood-chewing and other behaviours are impossible.

The majority of ant species live in tunnels (in soil or in wood), but the leg adaptations of Melissotarsus workers are novel. We used our results on leg modifications to infer a bracing function during tunnelling activities. Importantly, Melissotarsus queens have completely normal morphology (typical legs and wings, large eyes), allowing for rigorous comparisons with workers. The irreversible commitment of workers to life inside living trees has also led to highly reduced eyes (unknown in arboreal ants) and a simplified brain (optic lobe especially), making room for larger mandible muscles. Such extreme specialization in morphology is possible in a social insect, because the queen caste remains able to disperse by flight and walk outside host trees during the initial stages of colony foundation.