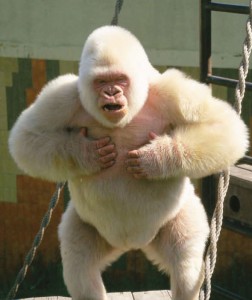 gorilla, was certainly special. As you can see from this beautiful photo, his fur was white, his eyes were blue, and his skin was pink. Although Snowflake passed away in 2003, he left behind a big legacy and an even bigger fan base. Both in life and death, he extended his furry reach into the music industry, onto National Geographic’s cover, and into endangered species awareness campaigns. However, recently researchers have managed to delve into his genome, and with it, the secret of his heritage. But what exactly IS his heritage? What can we learn from his genetic make-up

Well, the findings suggest something’s amiss in Snowflake’s conception: a deep, dark secret that most humans would frown upon. He was a product of inbreeding, revealing that primate incest occurs in the wild. Cases of inbreeding in wild lowland gorillas are rare, due to their social structure. Females are known to move away from their natal groups to avoid the advances of their siblings. In fact, female lowland gorillas are often drifting from group to group.

Could this inbreeding be the reason for Snowflake’s white fur? Perhaps, say researchers.  It was found that approximately 12 % of Snowflake’s genome contained stretches of DNA where the two copies inherited from each parent were identical. Such large amounts of genomic overlap is usually a good indication that that the parents are closely related – which in the case of Snowflake, points to an illicit union between either an uncle and a niece, or an aunt and a nephew. 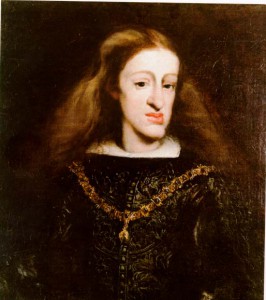 The reduction in genetic variation that comes about when these similar genomes combine often allows otherwise recessive traits to be expressed. In this case, Snowflake’s gene for albinism – known as SLC45A2—was the most striking product of this effect.

Inbreeding in human culture is stigmatized heavily, as the symptoms are often evident in offspring. An example of this might be King Carlos II of Spain. Eventually King Carlos II was deemed unfit to rule due to his physical and mental handicap. By then, the effect of inbreeding had rendered Carlos II impotent, and his wife died childless and depressed. It was too late for this bloodline now… The Spanish Hapsburgs had reached their end.

It could be said that inbreeding led to Snowflake’s end too. Snowflake had been struggling with an ongoing battle with skin cancer – and was euthanized on November 24th 2003 to relieve his pain.  But researchers suggested Snowflake’s albinism and his skin cancer were most certainly linked: Snowflake’s lack of skin pigment increased the risk of UV damage. Inbreeding had been Snowflake’s downfall – not only had it led to his albinism & subsequent skin cancer, but his clan were massacred by hunters, who saw his unique white coat as an opportunity to make money.

Eventually, Barcelona Zoo had hoped to breed Snowflake to create many more little white gorillas, but maybe doing so would have resulted in the same tragic outcome. In the end, Snowflake was father to 22 young from 3 different females, yet no white gorillas were produced in the attempts. Perhaps it was for the best.

Although Snowflake’s tale of incest serves as a tragedy, it’s nice to remember him as more than just a white gorilla. He was well-loved by his owners and fans alike, who still remember him for his undeniable intelligence and bright personality.

Watch Snowflake as a child – (it’s worth seeing!)