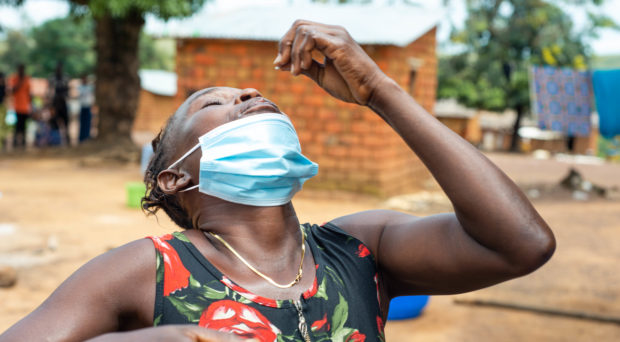 Makiese is a farmer and grandmother from Kongo-central, Democratic Republic of Congo. Here she is seen taking treatment to prevent the NTD, river blindness. Credit: © Moses Sawasawa/Sightsavers

Recent progress towards the control, elimination and eradication of neglected tropical diseases (NTDs) provides inspiring examples of what can be achieved in global health through collaboration, coordination and partnership.

Recognising NTDs as a “best buy” in global health, the London Declaration on NTDs, adopted in 2012, cemented a diverse partnership between endemic countries, funders, pharmaceutical companies and non-government organisations to accelerate progress for 10 NTDs and the targets set in the first World Health Organization (WHO) road map for NTDs.

Progress on NTDs since 2012

Progress since the London Declaration and the first WHO road map has indeed been significant. The number of cases of Guinea worm has reduced from an estimated 3.5 million in the 1980s to just 54 in 2019; lymphatic filariasis and trachoma have been eliminated as public health problems in 17 and 11 countries, respectively; onchocerciasis has been eliminated in four countries in the Americas; the annual number of cases of human African trypanosomiasis has fallen from more than 7,000 in 2012 to fewer than 1000 in 2019; and in India, Bangladesh and Nepal, reported cases of visceral leishmaniasis have declined from more than 77,000 in 1992 to under 3,200 in 2019.

However, recent changes to the global funding landscape threaten to stall and potentially reverse this progress. In 2021, the United Kingdom, a leader in the fight against NTDs, announced a significant reduction in funding for NTDs alongside sweeping overall cuts to official development assistance, including its flagship NTD programme, Ascend (Accelerating Sustainable Control and Elimination of Neglected Tropical Diseases). This is estimated to impact over 100 million people in 24 countries.

The immediate health and quality of life impact on people affected by reduced funding for NTDs will be devastating. However, the true effects of reduced funding are likely to be more severe as future generations experience the long-term consequences of diminished mental health and wellbeing, poorer educational attainment, limited access to clean water and sanitation, and reduced productivity, all of which will disproportionately affect the most marginalised people in society, including girls, women, and people with disabilities. Additionally, the beneficial impact of NTD programmes on health systems, and particularly their resilience to future shocks such as pandemics and climate-driven crises, will be greatly reduced.

Is current analysis of NTD programmes a true reflection of their value?

Going forward, it is important that analyses of NTD programmes (and NTD programme cuts) account for the true value of progress on NTDs and recognise the interconnectedness between NTDs and the achievement of broader Sustainable Development Goals, including on poverty, gender equality, education, and clean water and sanitation.

Common methodological approaches, such as economic evaluations that estimate disability adjusted life years (DALYs), likely underestimate the true value of progress for NTDs because the quality of life of people with disabilities in NTD-endemic settings is often lower than in more developed settings. Moreover, as Charles King and Anne-Marie Bertino note in Asymmetries of poverty: Why global burden of disease valuations underestimate the burden of NTDs, “the application of the DALY in policy estimates does not account for the nonlinear effects of poverty in the cost-utility analysis of disease control, effectively discounting the utility of comprehensively treating NTDs”. Consequently, it is likely that the reduction in quality of life caused by reduced funding will be greater than anticipated.

Action is needed to secure funding to accelerate progress

Investments in NTDs are widely acknowledged to be some of the most cost-effective investments in global health. However, the reduced funding for NTD programmes highlights the need for advancements in available economic tools and methodologies to demonstrate to donors and national governments the broad impact of their investments and the interconnectedness of NTDs and broader development goals.

The new WHO road map for NTDs 2021-2030 recognises the importance of working across sectors to achieve and sustain progress for NTDs. However, if we are to meet road map targets, action is needed now to secure stable funding (see The value of water in elimination of neglected tropical diseases: An economic perspective.). Doing so will not only accelerate progress for NTDs, but will economically empower entire communities and countries, while advancing progress towards universal health coverage and the Sustainable Development Goals.

Tim Jesudason is a health economist at Triangulate Health Ltd.
He has a strong background experience in health economics and communications in the field of neglected tropical diseases (NTDs). Tim holds bachelor's degrees in International Relations and Philosophy from the University of Melbourne and Victoria University of Wellington and a Master of Public Health (Health Economics) degree from the London School of Hygiene & Tropical Medicine.

Yael Velleman is Director of Policy and Communication at the SCI Foundation.
She is passionate about making the world a cleaner and healthier place for all, with a particular interest in the links between water, sanitation, hygiene (WASH) and public health, and has worked extensively on strategic planning and policy engagement on WASH and Neglected Tropical Disease. Yael has worked in the UK, Uganda and Nicaragua, and has supported work in several countries in sub-Saharan Africa and Asia.
She holds a bachelor’s degree in International Development from the University of East Anglia, and a Master’s degree in Health Policy, Planning and Financing from the London School of Hygiene and Tropical Medicine and the London School of Economics.

Latest posts by Tim Jesudason and Yael Velleman (see all)