These four female Culex mosquitoes have clearly fed on the honey-baited FTA card as evidenced by the visible blue honey in their abdomens. (Photo: Nadja Wipf).

The idea to take advantage of the fact that infectious mosquitoes spit out viruses in their saliva not only during blood- but also during sugar-feeding is not new. Australian researchers, who dared to think out of the box, came up with the idea to collect mosquito saliva on honey-soaked filter papers housed in mosquito traps. They did not just use any filter paper but special ones coated with a patented mix of chemicals that inactivate pathogens and preserve DNA and RNA at ambient temperature, so called Flinders Technology Associates (FTA®) filter paper cards. The presence or absence of viruses can later be detected in the lab with molecular methods (e.g. with polymerase chain reactions specifically targeting the viral genome). With this innovative technique, they could overcome the limitations of laborious and cold chain dependent screening of thousands of mosquitoes.

Why is it important to detect viruses in mosquitoes?

The threat of mosquito-borne viruses is increasing in continental Europe as demonstrated by several locally transmitted chikungunya, dengue and West Nile virus outbreaks. In Switzerland, despite the presence of competent vectors, regular reports of human cases and local transmissions of mosquito-borne viral diseases in neighbouring countries, there is still no routine surveillance system in place to detect circulating viruses in mosquitoes. In a field trial in southern Switzerland, we evaluated which mosquito traps work best in combination with FTA cards. We also assessed the sensitivity of the honey-bait approach by testing both the collected mosquitoes and the FTA cards for the presence of viruses.

How did we catch the mosquitoes?

We set the three types of mosquito traps in urban and suburban areas of southern Switzerland. One trapping session lasted 48 hours and each trap was set 80 times between July and October 2016.

In our study, the Box gravid trap caught by far the most mosquitoes – in fact over 11 times more – than the other trap types. Besides being the most efficient trap and catching the broadest variety of Culex and Aedes species, I personally found it to be the most convenient trap to use in combination with honey-baited FTA cards; the inner wall of its collection chamber is ideal for attaching the cards because it is protected from environmental impacts and easily accessible by caught mosquitoes.

How did we know the mosquitoes have fed on the FTA cards?

Because we coloured the honey with blue food dye – we knew if a mosquito had fed on the FTA card if we detected the blue colour in their bodies when examining them under a stereo microscope. On average three out of four caught mosquitoes fed on the honey-bait, which we considered as a satisfactory feeding rate.

Did we detect mosquito-borne viruses?

Yes! The most exciting result of this study was that we detected Usutu virus in a pool of six Culex mosquitoes and also on the FTA card placed in the same Box gravid trap that caught these infected mosquitoes. Remarkably, we only saw blue honey in two of these Culex mosquitoes. This suggests, that we detected Usutu virus from saliva of as little as one or two infectious mosquitoes on the FTA card, emphasising the high sensitivity of this method.

Based on the encouraging results we continuously use honey-baited FTA cards in southern Switzerland for the surveillance of mosquito-borne viruses. In addition, other Swiss regions have stated their interest in using the FTA card approach for surveillance purposes of in the future. Nadja Wipf is a PhD candidate at the Swiss Tropical and Public Health Institute in Basel, Switzerland. She focuses on the development and field evaluation of innovative tools for mosquito surveillance.
Follow: https://twitter.com/NadjaWipf 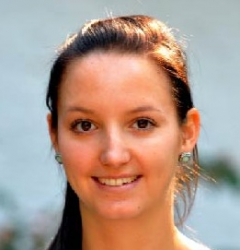