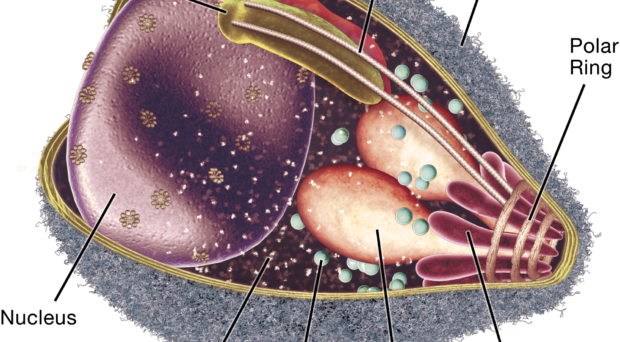 Of the five species of malaria parasites known to infect humans, Plasmodium falciparum is the most virulent, but this virulence is variable.  One factor determining the great variability in clinical symptoms associated with falciparum malaria is, which of the many strains of the parasite is infecting the patient.

Many of the genes encoding proteins produced by P. falciparum occur in a variety of forms, or alleles, and different strains of the parasite express different forms of these proteins. One such family of proteins, called merozoite surface proteins, have been linked to differences in clinical outcomes of disease, such as mild or severe anaemia or cerebral malaria.

Merozoite surface proteins  (MSPs) are a family of proteins essential to the process of invasion of red blood cells by the merozoite stage of the malaria parasite. As the name implies, they are located on the surface of the merozoite. Different strains of the parasite express different forms of MSPs.

MSP1 is the most abundant of these proteins. It is a large GPI-anchored protein that undergoes fragmentation prior to red blood cell invasion and appears to be involved in the initial binding of the parasite to the cell.

The second most abundant MSP is MSP2, a smaller molecule whose function is unknown.

As people in malaria endemic areas are often bitten by more than one infected mosquito, they can be infected with more than one strain of the parasite at the same time. Studies, such as one  in Gabon, have suggested that increasing severity of malaria is linked with increasing variety in the forms of MSP1 that parasites within the patient are expressing.

A recent study carried out in Burkina Faso focussed on patients infected with strains expressing different forms of MSP1 and MSP2. The researchers looked at symptoms associated with the different strains and investigated whether strains competed within the host and whether mixed infections caused more, or less, disease severity.

Blood was taken from patients taking part in a separate drug evaluation trial and assessed microscopically for the presence of malaria parasites and haemoglobin levels measured. Dried blood samples were used to detect the presence of alleles for msp1 and msp2 gene families. Disease severity was determined according to three parameters: high body temperature, anaemia and parasite density.

The study took place in two sites over 2 years and during this time, 1010 patients in the study were diagnosed positive for malaria. Three msp1-allelic families and msp2-families were detected in blood samples and there were many patients with more than one allelic family circulating. One hundred and fifty-five patients had all three msp1 allelic families present. The prevalence of these gene families was similar at the two sites, suggesting a population flow between them.

The presence of one msp1 allelic family, MAD20, was associated with the highest parasite density, although this was not the most common family found. I wonder if the structure of this particular form of the protein enhances binding to the red blood cell.

Surprisingly, when mixed infections with parasites from more than one strain were present, the number of parasites did not increase compared to single strain infections, indeed, the density of msp1-MAD20 actually decreased in mixed infections. The authors suggest there is competition between parasite strains, and the growth of MAD20 was supressed by this competition, though they make no suggestions as to how they may compete.

In contrast, no difference in strain density was found when single or mixed infections with the two msp2 allelic families were compared.

Patient temperature increased with parasite density (parasitaemia) but temperature was not affected by the presence of different parasite strains, either as single or mixed infections.

Haemoglobin levels (a measure of anaemia) were also unaffected by which strain of msp1 was present, but one msp2 allelic family, FC27, showed the lowest haemoglobin level in both single and mixed infections and was thus more pathogenic.

Parasite density, fever and anaemia are all features of severe malaria infection. This study did show that the strain of malaria parasite a patient is infected with could, to some extent, affect the clinical outcome, particularly with respect to the presence of the msp2-FC27 allele.

The authors point out that no patients with cerebral malaria were present in their study, so an association between these particular MSP strains and patients with extremely severe malaria could not be ruled out.

In endemic populations, development of immunity to malaria is dependent upon the exposure to a variety of strains of malaria that will occur with age. This is the likely explanation for the researchers’ finding that parasite density decreased with patient age. However, this was not the case for infections with all three msp1 strains simultaneously. The fact that these triple infections were found in the younger patients, who may not yet have been exposed to all the strains, may account for this.

It would be useful to determine whether early detection of parasites associated with virulence factors did indeed act as an indicator of the clinical progression of the infection and thereby inform patient management.