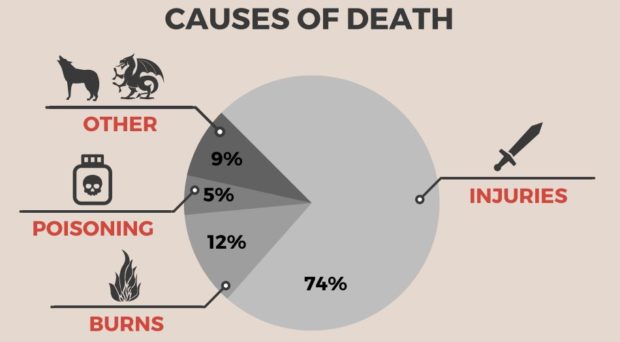 Game of Thrones is a popular HBO television series, with an estimated viewership of over 100 million people worldwide. The fantasy drama is renowned for its violent plot lines and graphic portrayal of the deaths of its characters.

Fans of Game of Thrones have learnt not to get overly attached to their favorite characters, because sooner or later, chances are they will end up dead. It would seem that no one is safe, no matter how popular or seemingly integral to the plot line the character may be.

The final season of Game of Thrones will reach television screens in April 2019. The end is nigh, and the question on many people’s minds is: Who will live and who will die?

In anticipation of the final season of Game of Thrones, we decided to take a scientific look at the first seven seasons to see what we could learn about mortality and survival in the series. We set out to determine exactly how long a character survived in the series and to identify characteristics and attributes that were important for survival.

In addition, we also described the causes and circumstances of deaths using classification codes from the International Statistical Classification of Diseases and Related Health Problems, 10th Revision, Australian Modification (ICD-10-AM).

When you play the game of thrones, you win or you die.

The main findings from our analyses, which were published today in Injury Epidemiology, are depicted in the infographic below. We found that more than half of the characters (56%) had died by the end of the seventh season. The survival time of individual characters varied widely, ranging from 11 seconds to over 57 hours. The probability of dying within the first hour after first appearing in the series was about 14%.

The probability of dying within the first hour after first appearing in the series was about 14%.

We found that the most common causes of death were injuries (74%), in particular wounds of the head and neck, including 13 decapitations. Only two deaths from natural causes occurred across the seven seasons of the show. The remainder of deaths were from burns (12%) or poisonings (5%). The most common circumstances of deaths were assault (63%) and operations of war (24%).

While these findings may not be surprising for regular viewers of Game of Thrones, we have also identified several factors that are associated with better or worse survival, which may help us to speculate about who will prevail in the final season. Characters are more likely to survive if they are female, are highborn (i.e. belong to the aristocracy), and switch allegiances during the series. In addition, characters are more likely to survive if they feature either very little or very much during the series, with those featuring a moderate amount being at greater risk of death.

What can we learn from the violence of Westeros?

Most people probably do not think twice about high rates of violent deaths in a fantasy drama television series, but it is worth noting that high rates of violence are not without precedent in human history. In his book The Better Angles of Our Nature: Why Violence Has Declined, Steven Pinker adeptly summarizes the available data on violence in human history, illustrates the precipitous decline over time, and identifies the main historical forces that have contributed to this decline.

We would argue that the ubiquity of violent deaths in the world of Game of Thrones may be attributable to, for instance, the absence of stable democratic government structures, resilient public institutions that can deliver public goods (e.g. schools and hospitals), and implementation of evidence-based violence prevention policies. As such, we think that Game of Thrones can help us reflect on our current situation.

We are privileged to be living in relative safety and enjoying the benefits of the tremendous progress that have been made over millennia, centuries, and decades, in particular in terms of violence reduction. Simultaneously, we are also reminded that we need to be vigilant and continue to protect and invest in the institutions and systems that contribute to this progress.