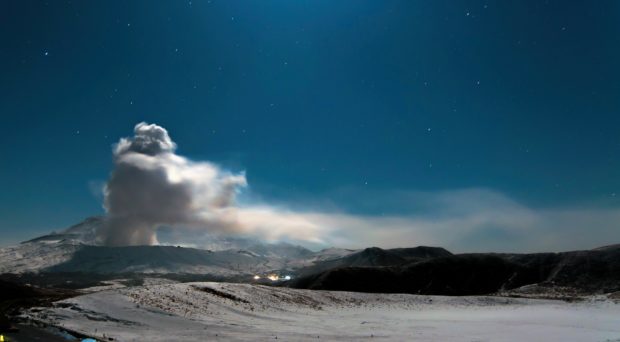 Earth, Planets and Space has recently introduced a new article type, Express Letter, with the aim of providing authors with a fast way to publish brief reports on their research.

Express Letters undergo a rigorous, but rapid, peer-review process. The average time between submission to first decision is 30 days, and from submission to publication is 104 days. So, if you want to publish quickly your results without undermining the quality, the Express Letter article type is what you were looking for.

We asked two authors to talk about their research and the reasons why they chose the new Express Letter article type.

The Kusatsu-Shirane volcano is an andesitic–dacitic quaternary volcano in Central Japan. It is known for its frequent phreatic eruptions in the last 140 years.

This paper imaged three-dimensional resistivity distribution using a natural electromagnetic method to a depth of 2km. The resistivity is an important physical parameter sensitive to the distribution of the low-permeability clay cap and the underlying geothermal fluids.

We imaged the bell-shaped clay cap, which seals the underlying high-temperature gas and fluids and deep magmatic brine below the brittle-ductile boundary. This 3D model, together with the seismicity, geodetic, and magnetic models, was interpreted as the cause of 2014 volcanic unrest.

The authors hope that this model will provide a basic concept for volcano monitoring for the Kusatsu-Shirane volcano and other equivalents worldwide. We also hope that this paper will help mitigate volcanic risk.

We submitted this article as part of the special issue Understanding phreatic eruptions – recent observations of Kusatsu-Shirane volcano and equivalents as an Express Letter, which has a word limit of 5,000 words and a maximum of 5 figures.

This allows author to keep the main text concise and easy to read. However, interested readers can get more details from the supplementary material. We like this style. We were honored that our contribution was selected as one of the highlighted papers in 2020 by the journal.

Temporal variation in the resistivity structure of the first Nakadake crater, Aso volcano, Japan, during the magmatic eruptions from November 2014 to May 2015, as inferred by the ACTIVE electromagnetic monitoring system
Takuto Minami, Mitsuru Utsugi, Hisashi Utada, Tsuneomi Kagiyama & Hiroyuki Inoue

We published a paper about temporal change in the shallow resistivity structure of the Mount Aso volcano, Central Kyushu, Japan. Electrical resistivity is an important proxy for understanding subsurface systems of volcanoes.

Monitoring volcanoes by resistivity has recently attracted more interest from researchers because the temporal change in resistivity directly implies evolution of hydrothermal system and/or movements of magma associated with volcanic activities.

In this paper, we inferred the temporal change of 3D resistivity structure of the first crater of Mount Aso between August 2014 and August 2015 by inverting data sets of a controlled-source electromagnetic (EM) volcano monitoring system called ACTIVE.

We found an increase in resistivity 400 m beneath the surface through the magnetic eruption of Mount Aso starting in November 2014. We interpreted this change as evaporation of hydrothermal fluid due to ascending magma just before the start of the magmatic eruption. This paper became one of the earliest reports of temporal change in resistivity structure associated with volcanic eruption.

Publishing this research as an Express Letter in EPS has been a great experience for us. We were able to quickly publish the results of our inversions and interpretation of ACTIVE data sets obtained during the magmatic eruption of Mount Aso.

Furthermore, EPS is an open access journal, which allowed us to immediately share the results with colleagues in related fields. EPS has seven sections — Geomagnetism, Aeronomy, Space science, Seismology, Volcanology, Geodesy, and Planetary science — a structure that helps researchers find and access the latest studies in each research field.

Also, the new content alert email I regularly receive helps me finding new publications in my field, but also in related fields.

We encourage you to submit an Express Letter to Earth, Planets and Space. More information about the journal can be found on the journal and on the Steering Committee websites Paola has been working in science publishing with Springer Nature since 2005 and is now Publisher of journals in the field of earth and environmental sciences.