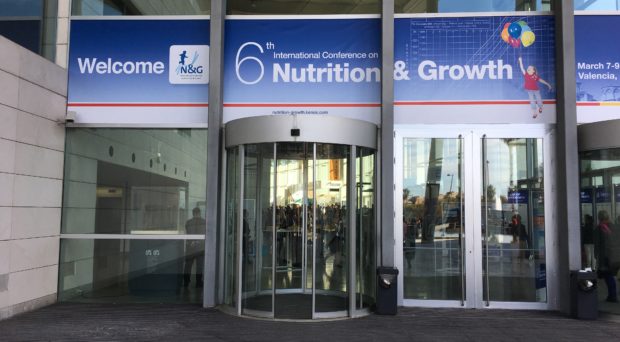 A number of talks discussed the benefits of breast milk, such as the protective effects of breastfeeding against obesity. However, they also called attention to the lower protein content of breast milk compared to formula milk. This protein deficit is particularly problematic for low birthweight preterm infants as breast milk is not enough to maintain their optimal growth, and so a fortifier is required to fill this deficit.

Early results from the Baby Connectome Project presented by Brittany Howell further discussed the impact of breast milk on the infant gut microbiome. Their microbiome exhibits enrichment during the first year of their life and changes drastically during this period. Breast milk has its own microbiome, and infants who are exclusively breastfed have less volatility in their microbiome before receiving complementary food.

Maintaining a ‘healthy’ microbial diversity and composition at this stage is key, particularly given the association between the gut microbiome and neurocognitive development, which itself is also impacted by nutrient intake.

By contrast, gut dysbiosis (as discussed by Bob Murray) can lead to an increase in pathogenic bacteria. Furthermore, certain drugs – including antibiotics – can have a negative impact on the gut microbiome, thus strengthening the call for antibiotic stewardship programmes.

Whilst the importance of healthy eating and exercise is well known, the conference offered new perspectives. Matt Silver noted that the diet of people in Gambia changes seasonally, as they rely on subsistence farming. This seasonality in turn can mean there are differences in fetal gene methylation depending on the time of year conception occurs. One such gene is POMC, a region of which is linked to obesity.

As pointed out by Vimal Karani, an unhealthy diet can increase the genetic risk of obesity. For instance, the negative effects of fat mass and obesity-associated (FTO) gene variants can be attenuated by high fibre intake (as shown in an Asian Indian population).

An unhealthy diet can increase the genetic risk of obesity.

In terms of diet itself, Ramón Estruch extolled the virtues of the Mediterranean diet, noting both diet and exercise to be the “best weapons” against cardiovascular diseases and chronic diseases. This was supported by Tadej Battelino, who detailed the positive effects of physical activity with regards to cardiometabolic risks.

An interesting talk by Rosan Meyer shed light on the impact of food allergies on growth. Even when properly managed and dietary elimination is optimal, food allergic children can be short in stature. This could be due to a number of factors, including feeding difficulties and micronutrient deficiencies, and requires further investigation to understand the complex nature of this problem.

The results of several interventions, particularly those rolled out to tackle stunting and wasting, were also discussed. Sadly, a number of these reported disappointing outcomes.

Major trials conducted by Jean Humphrey and colleagues (‘WASH Benefits’ and ‘SHINE’) involved promotion of WASH (water, sanitation and hygiene) practices and/or better IYCF (infant and young child feeding). IYCF had a moderate impact on stunting, but neither WASH nor the combination of this with IYCF had an effect.

Robert Black further noted the limited effect of lipid nutrient and zinc supplements on stunting. Andrew Prentice (co-Guest Editor for a new BMC Medicine article collection on childhood malnutrition) flagged the positive trend of economic development on stunting prevalence, indicating that those in poorer countries are in need of radical ideas – albeit with a dash of patience – in order for them to see improvements.

This diverse and thought-provoking conference hammered home a number of key points, such as the importance of both maternal and fetal diet, the long-term health impacts of gut dysbiosis and malnutrition, and – importantly – the need for new innovative ideas, and more longitudinal studies and clinical trials in order to bring about real change in all aspects of pediatric nutrition and growth.

BMC Medicine is now welcoming submissions for an exciting new article collection on childhood malnutrition: ‘Stunting, undernutrition and obesity: the triple threat of childhood malnutrition’. We invite primary research articles and front-matter content investigating the problems and underlying mediating factors of this global health issue, and highlighting the impact of potential solutions.

Diana completed a PhD in Biomechanics at the University of Glasgow, studying tree frog adhesion. This was followed by a postdoc based at both the University of Kent and the University of Antwerp, studying bonobo hand pressures. She joined BMC Medicine in early 2017. Her interests include geriatric medicine, women’s health, and digital advances in clinical care.