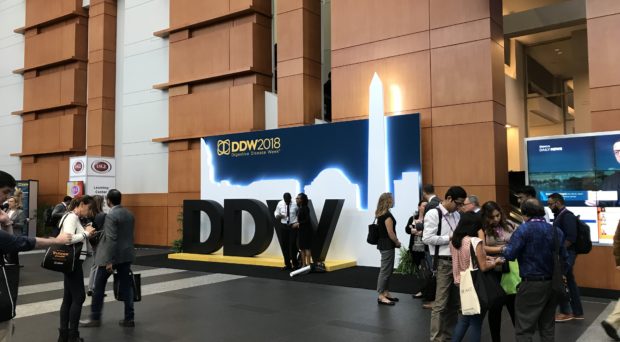 Attendance to the Digestive Disease Week 2018 gathering was marked by the impressive presence of around 32,000 participants from all over the globe. Here we summarize some of the exciting results presented during the meeting.

Santhi Swaroop Vege from the Mayo Cinic presented a talk regarding the relationship between acute and chronic pancreatitis. In his talk, he argues there is a number of definitions for chronic pancreatitis, however we are not sure which one is exact.

Given the high economic burden, and the uncertainty around disease progression, it is imperative to fully understand the mechanisms to provide the best possible treatment. As also indicated by Massimo Raimondo, early chronic pancreatitis is very difficult to define, and we do not have a gold standard for diagnosis.

An important take home message is that despite the ongoing controversy in chronic pancreatitis, lifestyle plays a fundamental role for the development of pancreatitis and should not be underestimated.

Regarding Inflammatory Bowel Disease, a condition that afflicts millions worldwide, a presentation by Kate Williamson (University of Oxford) reported the evaluation of the effect of vedolizumab (VDZ) on the progression of Primary Sclerosing Cholangitis (PSC).

After obtaining general demographics and variables regarding liver enzymes and IBD response, the authors concluded that while VDZ appears moderately effective for IBD in PSC/IBD, they observed no effect on ALP response.

Larger studies are needed on this topic, and we look forward to hearing about further results.

People who follow an extremely rigid diet have lower quality of life, and in addition, a strict gluten-free diet may result in inadequate dietary intake in some patients.

Benjamin Lebwohl (New York Presbyterian) talked about the difficulties of following a strict gluten-free diet (GFD). In recent years, adherence to GFD has increased, mostly in people not diagnosed with Chron’s Disease (CD).

Dr Lebwohl argues that people who follow an extremely rigid diet have lower quality of life, and in addition, a strict GFD diet may result in inadequate dietary intake in some patients. An additional risk of following a strict diet is the consumption of ultra-processed foods, which may negate the benefits provided by careful dietary planning.

For instance, results from the Manitoba celiac disease cohort indicate that a number of patients may not be able to correctly choose appropriate gluten-free foods, based upon product labeling information.

This highlights some of the challenges of following a true GFD diet, which requires minimizing accidental gluten exposure and making healthy food choices at the same time.

Alcoholism is estimated to cost $250 billion in the US alone. Our Editorial Board Member Gyongyi Szabo provided a talk on ‘Alcoholic liver disease: new paradigms and treatment’. Not everyone who has ALD is addicted to alcohol, and not everyone who drinks too much develops ALD.

However, inflammation is the common factor in brain, liver and gut damage. Excessive alcohol consumption alters the microbiota in the gut, causes inflammatory cell recruitment, resulting in a leaky gut and disease development.

Today, there are still gaps in the knowledge of alcoholic hepatitis (AH), for instance grading the severity of AH is still a challenge, and we do not know what factors contribute to the progression of the disease.

During her talk, Prof. Szabo proposed the new term ‘Alcohol Associated Liver Disease’ (AALD), and suggested combination therapy as a way of treating the disease.