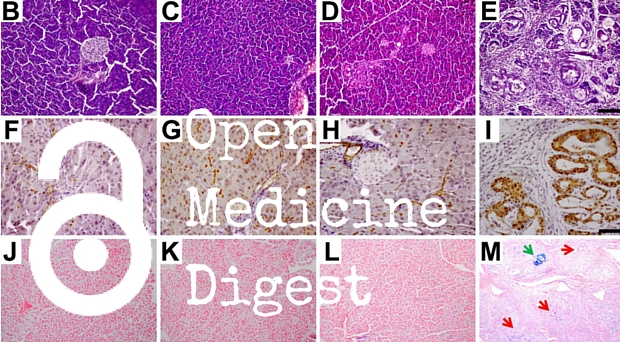 Results from a study conducted in mice suggest that maintaining the identity of pancreatic acinar cells could help prevent the development of cancer.

Pancreatic cancer is a leading cause of cancer death, with fewer than 20% of patients surviving more than a year after diagnosis. In order to better understand why normal cells in the pancreas become cancerous, researchers from the US investigated whether the protein PTF1A – a key regulator of acinar cells in the pancreas – has a role in suppressing tumor initiation.

The authors deleted the gene for PTF1A in mice, and acinar cells were reprogrammed into ductal cells as a result. Acinar-to-ductal metaplasia is a key stage in the development of pancreatic cancer. Additionally, simultaneous expression of the Kras oncogene led to the formation of malignant pancreatic tumors.

Together, these results suggest that PTF1A-mediated acinar cell differentiation suppresses the development of pancreatic cancer. Commenting on this study, Heather Schofield and Marina Pasca di Magliano highlight that:

Benefits of the Mediterranean diet for type 2 diabetics

The global prevalence of type 2 diabetes is increasing at an alarming rate; it is estimated that around 592 million people worldwide will suffer from the condition by 2035. Diet is an important determinant of type 2 diabetes development, and increasing evidence suggests that a Mediterranean diet helps reduce the risk of diabetes and cardiovascular disease.

Now, researchers from Italy and Greece have conducted a meta-analysis to bring together evidence for the efficacy of consuming a Mediterranean diet for the management of type 2 diabetes. 13 studies were included in the final analysis, and the authors found a consistent benefit of the Mediterranean diet for glycemic control compared with control diets.

The authors conclude that currently-available evidence supports the use of the Mediterranean diet for overall management of type 2 diabetes.

Is BMI associated with prognosis in colorectal cancer?

Obesity increases colorectal cancer (CRC) risk, accounting for up to 35% of cases, and is associated with a higher risk of CRC recurrence after adjuvant treatment. Now, researchers from Australia have studied whether body mass index (BMI) is associated with survival in CRC patients receiving targeted therapies.

Analyzing data from the South Australian Registry for metastatic CRC, the authors found that overall survival was worse in CRC patients who were either underweight or overweight compared with normal weight. Additionally, overweight and obese patients treated with bevacizumab had poorer outcome.

These findings indicate that BMI is associated with prognosis in CRC patients, and should be used to inform nutrition and lifestyle interventions for overweight people with CRC.

Flu vaccination in the tropics

Influenza infection occurs around the year in the tropics, with peaks in transmission corresponding to temperate regions. To better understand the effectiveness of influenza vaccination in tropical regions, a study of patients with influenza-like illness in Bangkok, Thailand, has been conducted.

The presence of influenza infection was ascertained with RT-PCR, and patients were asked about vaccination history. The authors report that vaccine effectiveness (VE) is better during high compared with low influenza activity periods.

VE was found to be 78% in those with comorbidities and 48% in those without, suggesting that vaccination provides modest protection against influenza infection in the tropics, including in those with underlying disease.

MRI scans, normally used to detect cancer, could be used to direct cell-based cancer treatments to specific areas of the body. Cell-based therapy exploits human cells to treat disease – for example, by using modified white blood cells to carry cancer-killing viruses – but its use in hard-to-reach areas of the body is not yet possible.

Researchers from Sheffield University “magnetized” cell-based therapy by loading it with microscopic iron particles, before injecting the modified therapy into mice with metastatic prostate cancer. The magnets in an MRI scanner were used to control where the drug was carried, and a reduction in tumor burden and metastasis was seen.

This early research suggests that clinical MRI scanners have the potential to steer cancer therapy to where it is needed in the body. Study author Munitta Muthana said that: