Vector-borne diseases account for more than 17% of all infectious illnesses and cause over a million deaths annually. Infections carried by mosquitoes make a substantial contribution to the global burden of vector-borne diseases; every year, malaria is responsible for more than 600,000 deaths, and 50-100 million people are thought to be infected with dengue. After attending two tropical medicine meetings hosted by RSTMH – the biennial Measuring Progress conference and a one-day meeting on vector-borne diseases – BMC Medicine takes a look at the current impact of mosquito-borne diseases and the steps being taken to combat them. 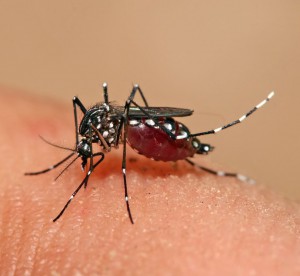 A number of dengue outbreaks have recently been reported, with infections seen in Madeira, China and India. Highlighting the Madeira outbreak at the RSTMH vector-borne diseases meeting, Carla de Sousa from the Lisbon Institute of Hygiene and Tropical Medicine described that Aedes aegypti, the dengue-carrying mosquitoes responsible for the recent outbreak, breed in areas near standing water such as plant pots and abandoned houses. de Sousa also explained the control measures – including salt water flushing of drains and insecticide application – that helped to bring the outbreak under control.

Dengue infection causes a flu-like illness in most people and is rarely life-threatening, but severe complications can occur in some patients. While there were no deaths in the Madeira outbreak, fatalities have been reported this year in Malaysia and China. Given this variation in severity, it is important to identify those at risk of developing severe dengue infection early on to prioritize treatment for those most in need. One way of doing this is through predictive markers; in a review article published recently in BMC Medicine, Sophie Yacoub and Bridget Wills discuss biomarkers that have the potential to predict severe infection risk and prioritize early intervention.

So what is being done to monitor and prevent future outbreaks of dengue? At the RSTMH vector-borne diseases meeting, Federico Gobbi described current surveillance efforts for dengue, West Nile Fever and chikungunya in Italy. As described in Gobbi’s research article published in BMC Infectious Diseases, monitoring these diseases should help to detect potential outbreaks at an early stage where vector control measures can be employed to prevent the infections spreading. Raman Velayudhan from the World Health Organization described three phases for action against dengue in Europe: controlling the vector, preventing the disease, and limiting its spread. Velayudhan highlighted that:

“[Dengue is a] high medical need that remains unaddressed“

Mapping the spread of infection

Geospatial mapping is another strategy currently being explored to monitor and predict outbreaks of vector-borne diseases. Moritz Kraemer outlined how global distribution maps can help to predict the spread of arbovirus vectors to inform control strategies. At the RSTMH Measuring Progress meeting, Peter Gething discussed data from the Malaria Atlas Project, which provides a dynamic evaluation of both Plasmodium falciparum and Plasmodium vivax malaria over time, as well as modeling the impact of control efforts to inform future strategies.

From insecticide spraying to modifying mosquitoes’ immune systems, a number of speakers highlighted ways in which insect disease vectors can be controlled. Henrique Silvera described the results of experimental studies where mosquitoes were injected with immunomodulatory molecules to reduce their susceptibility to infection, whereas Bart Knols presented promising early results of using eave tubes to prevent malaria-carrying mosquitoes from entering houses in Tanzania. Knols explained that inserting tubes containing insecticide-treated nets into the eaves of houses is a cost-effective strategy to reduce the spread of malaria, as low levels of insecticide are required, and the tubes can be installed by local workmen.

Vector control, geospatial mapping of outbreaks and environmental interventions all have the potential to reduce the global burden of malaria, dengue and other mosquito-borne diseases. At the RSTMH Measuring Progress meeting, Alan Magill explained that these measures, together with vaccines, mass drug administration, rapid detection and combating drug resistance, are important as we take steps towards the elimination of malaria. Magill emphasized that malaria eradication must be achieved, highlighing that concurrent measures are required for malaria elimination, in a collaborative approach towards complete detection, complete cure and complete transmission prevention.

To highlight current progress towards the ultimate goal of malaria eradication, BMC Medicine’s Combating malaria: research, prevention and treatment article collection is now open for submissions. We are seeking submissions of articles in all areas of malaria research, including vaccine development, antimalarial agents, diagnosis, vector control and disease epidemiology in both P. falciparum and P. vivax malaria. IF you have any research you would like us to consider for inclusion in this article collection, please email bmcmedicineeditorial@biomedcentral.com.