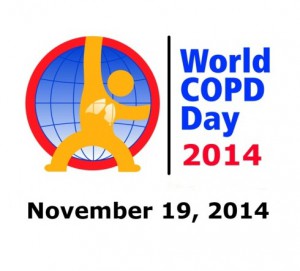 Chronic Obstructive Pulmonary Disease, better known simply as COPD, is the third leading cause of death worldwide. Three million people died of COPD in 2012 according to the WHO, yet public awareness of this disease isn’t nearly as high as say cancer, HIV or heart disease.

This is where the Global Initiative for Chronic Obstructive Lung Disease (GOLD) come in with their annual World COPD Day, hoping to raise awareness about COPD and improve treatment options worldwide.

So, what exactly is COPD?

COPD can be classified as a narrowing of the airways which obstructs normal breathing, resulting in symptoms such as chronic cough, shortness of breath and abnormal sputum production.

COPD is an umbrella term encompassing a whole range of conditions such as chronic bronchitis and emphysema, which are now recognised as COPD phenotypes rather than individual diseases themselves.

Unsurprisingly, the leading cause of COPD is smoking. However there are also genetic and environmental factors which contribute to both the development and progression of the disease. It’s a scary thought that, according to the NHS choices website, there are a predicted 3 million people in the UK living with COPD yet only 900,000 of these cases have been diagnosed with most dismissing their symptoms as ‘smoker’s cough’.

We’re committed to publishing research on the disease to help improve these kind of statistics (just search COPD on the BioMed Central website) and have a cluster of Pulmonary Medicine journals in which important research and review articles can be published.

An interesting observational study published recently in Respiratory Research shows that there is at least some respite for patients with COPD.

The authors studied patients around the clock, recording their exacerbations and have shown that symptoms are more common in the early morning and day versus the night, an outcome which should be considered when managing the disease.

COPD and its impact on patients

Multidisciplinary Respiratory Medicine recently published an article which analysed the impact of the disease in Southern Brazil through use of the COPD Assessment Test (CAT), a questionnaire designed to assess impact of COPD on the patient’s health.

Researchers found that despite a significant majority of patients being classified as having severe or very severe COPD, the level of disease impact assessed by CAT actually ranged from low to moderate. The CAT test is therefore a useful tool for determining treatment routes, based on the effect the disease has on quality of life.

Can we do more?

As there is no cure for COPD, it is clear that research needs to continue to help us treat and manage this major health concern.

We’ve recently launched the submission system of a new journal, which aims to do just this: COPD Research and Practice. Led by Editor-in-Chief Professor Mario Cazzola, the journal will publish basic and clinical research and cutting edge reviews to help translate ideas from bench to bedside and encourage international and interdisciplinary collaboration.