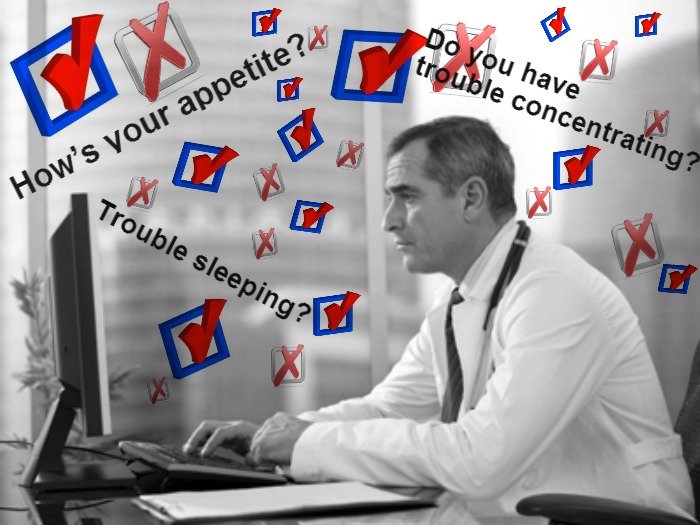 Obligingly Mr Smith settled himself in the little wooden armchair beside the desk, as the GP reclaimed his position at the computer.

“So what seems to be the problem” enquired Dr Smith, eyes fixed on the computer screened.

Mr Jones stared down at his lap. His bony hands cradled one another. He slowly rubbed his thumbs in a soothing rhythmic ritual as he hesitated with his response.

“How’s your appetite? Have you had trouble sleeping or difficulty getting to sleep?” The drilling questioning had begun.

“Well, I haven’t been feeling myself lately. It’s hard to describe.” He paused. Shuffled his feet and slumped forward slightly, curling himself “I feel like I’ve lost myself. Trapped and wandering around an impenetrable darkness, just me, all alone, with my thoughts of failure and self-loathing eating away at me.” He let out a deep sigh, “Life is just an endless misery…”

As Mr Jones opened up about his depression and confided in one, whom he is supposed to entrust with his health and welfare, he found himself as isolated as ever. His words falling on deaf ears as his concerns seemed to be ignored. Upon occasion, Dr Smith would tear himself away from the computer screen; look down his nose at the patient before returning to busily tap away at the keyboard.

Dr Smith charged on with his box-ticking exercise, “Have you felt tired lately? Have you felt that you’re a failure? Do you have trouble concentrating on things? Have you or have you considered harming yourself?”

When Dr Smith had reached the end of his list, he printed off a prescription. “Here you go. Take this to reception downstairs. It’ll help.”

His time was up. Mr Jones reluctantly took the prescription, left the room and plodded towards reception.

Thankfully, few of us have ever had this experience, but there might be aspects that resonate with either our own experiences or ones that friends and relatives have shared with us. A feeling that patient care has shifted from the individual patient’s concerns to a mere box-ticking, target-hitting exercise.

This disconnectedness of one’s GP and lack of engagement with one’s suffering is at the heart of the launch of a campaign, ‘The Campaign for Real Evidence-Based Medicine (EBM)’.

More than 20 years ago, Trish Greenhalgh, Professor of Primary Health Care at Queen Mary, University of London, and colleagues announced a ’new paradigm‘ for teaching and practicing clinical medicine. EBM represents a shift from the traditional practice of medicine that relies on anecdotes and lab-based discoveries to a standard that prioritizes the needs and wishes of the patient.

EBM’s history is complex. It has achieved numerous successes over the past two decades. In 1990, the British Thoracic Society developed its asthma guidelines using a combination of randomized trials and observational studies. As a result, the use of personal care planning and step-wise prescription of inhaled steroids for asthma increased, and mortality fell.

It also made progress in the prevention of patient’s suffering from blood clots after surgery. In 2007, evidence-based guidelines were prepared by NICE and updated in 2010. Following publication of these guidelines, there was a steady uptake of the recommendations and a significant reduction in thrombo-embolic complications.

Despite these achievements, there are problems with EBM’s implementation. Issues faced include the unmanageable volumes of evidence, and more recently, the managerialization of medicine leaving less space for the patient’s voice and guidelines which are a poor fit to the growing number of people with multiple conditions. 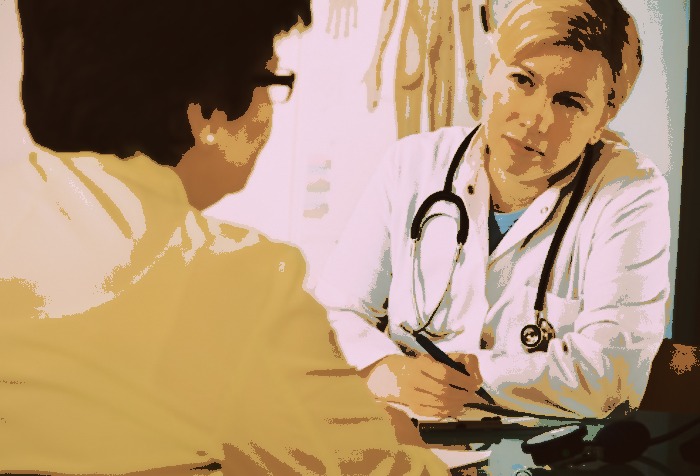 Last Thursday (3rd July), Trish Greenhalgh raised the profile of the movement’s renaissance by speaking out at the Health Services Research conference. She explained that this is a program where the care of individual patients takes top priority.

“One of the main drivers for a more ‘personalized’ version of EBM is patients, who have rightly demanded to be treated as individuals by caring doctors and nurses, not tyrannized by protocols.”

Greenhalgh warns that the health profession is raising a generation of doctors who are not engaging critically with their patients.

“Currently, when someone visits their GP or a hospital doctor, quite a bit of the encounter will typically be taken up by the doctor working through a structured computer template that directs the questions to be asked, the parts of the body to be examined and the recommended medication.”

Instead, GPs need to form a much deeper understanding about what matters to patients. This can be achieved by sharing decisions with patients through meaningful conversations.

A recent essay in the BMJ, Evidence based medicine: a movement in crisis?, brings the two sides of the campaign together, with parts acting as the advocate for the campaign and others voicing reservations about EBM.

For a campaign that began on Twitter, it is appropriate that the essay be published via the open access route, as the agenda is intended to be discussed by the public. By making the paper freely available to all, the research has had further reach and is accessible to and read by a broader audience than if it had been deposited behind a paywall. This has spurred on the debate and minimized twisting of the story.

And this is just the beginning. The BMJ article is the first of five papers to be published, acting as a platform to open up the debate and invite readers to contribute their own views.