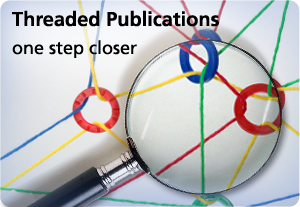 For years, researchers have drawn attention to this, highlighting discrepancies between protocols submitted to research ethics committees and those reported in the results papers, issues concerning statistical power, and the difficulty in identifying unpublished studies. Indeed, it was concerns like these that lead to most major medical journals making registration of clinical trials a prerequisite for publication.

However, even for those clinical trials that have been registered, it can be difficult to track down related content. Not all journals publish the trial ID in the body of the article; therefore, although a results article may cite a published protocol, there is nothing to connect that article to subsequent publications. And nothing to link from the protocol to the results article.

In 1999, Altman and Chalmers envisioned a solution to this. In their article in The Lancet they wrote: “Electronic publication of a protocol could be simply the first element in a sequence of ‘threaded’ electronic publications, which continues with reports of the resulting research (published in sufficient detail to meet some of the criticisms of less detailed reports published in print journals), followed by deposition of the complete data set.” This was the first description of ‘Threaded Publications’. 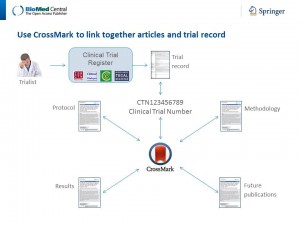 The power of this concept of connecting all digitally-published content relating to the evidence about a particular trial is shown by the initiatives implemented by publishers, such as BioMed Central, F1000 and others. However, to achieve its fundamental aims, Threaded Publications must go beyond a single journal or publisher, linking a trial’s registration record and all articles reporting the protocol or findings of the trial, published in different journals or by different publishers, in a single thread.

It was in pursuit of this ambition that, in partnership with CrossRef, we called a cross-publisher meeting to discuss how to build on the well-established digital-object identifier (DOI) and the more recent CrossMark tool to achieve the Threaded Publications concept.

As co-chair of the meeting, together with my colleague Tim Stevenson, and Geoffrey Bilder and Rachael Lammey of CrossRef, we met with representatives from the BMJ, PLoS, The Lancet, eLife, F1000 and Springer. The aim of this meeting was to reach a consensus as to what metadata to include in the ‘thread’ and agree on how to move forward.

Under the existing CrossMark system, publishers can already include additional ‘assertions’, that is extra, non-bibliographic metadata, which can give more information about the article in question. There has been lots of uptake on this, with over 1 million assertions so far. However, under this system, the assertions for each article in a thread would need to be updated every time a new article was published. This would obviously not be feasible.

Geoffrey Bilder offered a solution to this. Working off a similar model to the newly-launched FundRef system, which is a typed namespace that sits under the CrossMark metadata container, he proposed that CrossRef create a ‘registry of registries’, which included the name of the registry, any short names associated with it, such as ISRCTN, and a resolution template for links to the trial records. With this in place, authors and publishers could link an article to a stated clinical trial number using a simple widget. CrossMark would then list all articles that cite that trial ID. 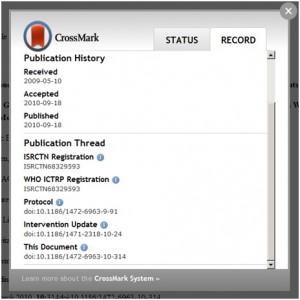 Under the original proposal from Iain Hrynaszkiewicz of F1000, formerly of BioMed Central, article type would also have been included; however, to date, there is no standardised article type ontology. Therefore, it was suggested that articles were listed in order of publication date, according to a series of ‘elements’ that captured the article’s relation to the trial.

A number of potential concerns were also raised, including the possibility of false associations between articles; however, this was considered the simplest solution, with self-policing by authors, publishers and funders. By implementing such a straightforward solution, it gives scope for development based on future needs and feedback.

All those attending were very enthusiastic about the project, and it was felt that this would give real benefit to the research community. It was agreed to form a working group to take the project forward. Led by a representative from BioMed Central and a Product Manager from CrossRef, and composed of publishers, trials registries and funders, this group will govern the development of the project to ensure the best possible results. Watch this space!

[…] on from a meeting we hosted earlier this year, an international, cross-publisher working group has been formed to govern the development of this […]