Since their discovery in the early nineties, microRNAs (or miRNAs) have been found in all complex organisms including mammals, plants and fungi. More than 700 miRNAs have been discovered in humans and more than 800 are predicted to exist. The functions of miRNA seem to lie in gene regulation and they have various roles in physiology cell differentiation, proliferation, apoptosis to the endocrine system, haematopoiesis, fat metabolism, and limb morphogenesis.

As miRNA is involved in normal cellular functions, malfunctioning miRNAs have long been thought to play a role in the pathological events underlying cancers and neurodegenerative diseases, such as Alzheimer’s disease. In a R 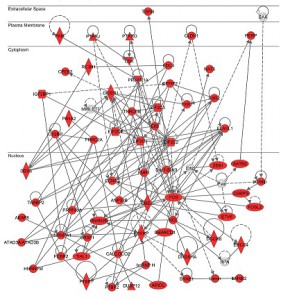 eview by Prof. Jun-ichi Satoh published in BioData Mining, Prof. Satoh examines the relationship between individual miRNAs and these two major illness. By applying a digital workflow to two representative datasets of miRNA expression profiles, one for Alzheimer’s and one for adult T-Cell Leukaemia, Satoh sought to examine the relationship between miRNA and the two diseases.

The results support the view that miRNAs play a central regulatory role in both oncogenesis and neurodegeneration. Based on this view, miRNA-based therapy designed to simultaneously target multiple cancer-associated or neurodegenerative networks and pathways might provide a rational and effective approach to treating and preventing cancers and Alzheimer’s disease.

This novel and timely Review article is a valuable contribution to the existing literature. Not only does it provide interesting reading for miRNA investgators, but also network and computational experts.

Prof Jun-ichi Satoh M.D., Ph.D. is a Professor in the Department of Bioinformatics and Molecular Neuropathology at Meiji Pharmaceutical University.