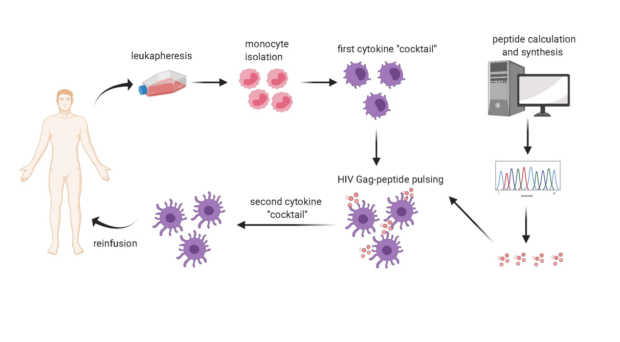 When I started to work on this topic, the general scenario was rather demotivating: the approaches that had so far been attempted had led to mixed or disappointing results. Among the strategies that had so far been attempted to raise anti-HIV immunity, the most frequently adopted approaches had been based on the administration of distinct viral portions either as purified proteins or genetic material in vectors able to induce the organism to produce the viral components and giving a more sustained exposition of the organism to the desired viral targets.

In 2013, my coworkers and I started to collect the first in-vivo results deriving from an experimental strategy aimed at HIV eradication and targeting the HIV-1 reservoir. This reservoir is contributed by those infected cells which harbor the provirus integrated in a latent form for a prolonged time and are responsible for the persistence of HIV despite effective antiretroviral therapies (ART). Their reactivation refuels the infection, in case life-long ART is suspended. However, in this case, macaques chronically infected with the simian HIV homolog, SIVmac251, had been subjected to a therapy specifically aimed at the elimination of the viral reservoir before ART was suspended. (More information can be found here.)

The result was, in my opinion, remarkable: although displaying periodic rises in viral load, the macaques were able to consistently “push back” the virus to undetectable levels, in the end maintaining acceptable CD4+ T-cell counts (an important prognostic marker in retroviral infections) as well as healthy conditions for the entire follow up (> 2 years).

Targeting the conserved regions of HIV

Surprisingly, my former Ph.D. student, Iart Luca Shytaj found that the result obtained was not only related to HIV reservoir restriction but also to the generation of a specific immunity directed against the viral capsid protein Gag. We thus decided to analyze further these unexpected immune responses. We found that the immune responses were directed to those portions of the HIV Gag protein that were least likely to mutate, i.e. those responsible for the multimerization of Gag and formation of the “skeleton” of the viral particles. If these portions of the Gag protein should mutate extensively, then, the general architecture of the virions would be compromised and the virus would become non-infective.

These responses belonged to the type called “cell-mediated responses”, which, differently from the antibody-mediated responses are not aimed at neutralizing the pathogen, but at destroying their source, i.e. the infected cells able to produce new viral progeny.

A few years later, the group of Ricardo Sobhie Diaz at the Federal University of Sao Paulo (UNIFESP), Brazil, thought that the contemporary current approaches to an HIV vaccine needed radical changes and decided to direct the immunity specifically towards the aforementioned highly conserved portions of Gag.

In our article now published in AIDS Research and Therapy, we sequenced the viruses infecting each participant in the clinical trial. We also characterized the participants´ HLA molecules, which vary in the population and can present the viral epitopes to the immune cells called CD8+ T-lymphocytes, which can thus acquire the ability to eliminate the infected cells. Bioinformatic techniques identified the portions of each trial participant´s virus that could best bind their individual HLA molecules.  Viral peptides thus identified were adsorbed onto the HLA molecules of immune cells called dendritic cells and derived from the trial participants´ blood. The cells were then re-inoculated in the same donors.

This trial resulted in two patients displaying an undetectable viral DNA, that is, the form in which the virus resides silent within the body) at the end of an experimental therapeutic protocol, remarkably in biopsies from the rectum (a place where HIV hides during standard ART).

Implications for the future

This research furnishes proof of concept for immunogenicity and partial efficacy of personalized immunization through autologous dendritic cells pulsed with peptides from the highly conserved regions of the HIV capsid Gag protein. A number of obstacles still need to be overcome before rendering it a potential novel therapy aimed at HIV eradication. The efficacy is still partial, and the method still needs improvement, for example through addition of specific drugs aimed at targeting the HIV reservoir. The process is still too complicated to become scalable. Full automatization through state-of-the-art techniques will be required to decrease the cost and manpower needed at an industrial level. 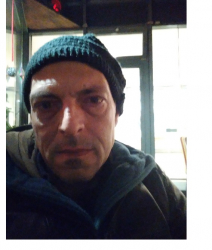 Dr. Andrea Savarino has authored both preclinical and clinical studies for understanding HIV persistence and developing strategies for an HIV cure. His major contribution to the field has been the thorough study and long-term follow-up of two macaques showing control of the virus following suspension of antiretroviral therapy plus an experimental anti-reservoir treatment, i.e., the gold salt auranofin and the investigational chemotherapeutic agent buthionione sulfoximine (BSO). With his team, Dr. Savarino found that these drugs are able to decrease the number of activated CD4 T cells -which are preferential targets for HIV infection- as well as to induce a "shock and kill" effect, contributing to the elimination of the latently infected cells.