The project aims to contribute to the elimination of HIV and reductions of TB and viral hepatitis among PWID in the EU by 2020 and focuses on member states with gaps in effective and evidence-informed interventions. The project will also encourage the implementation of comprehensive harm reduction programs in all EU member states as an essential strategy for improving prevention and treatment of HIV, TB and viral hepatitis.

Here’s my interview with Mika Salminen, Coordinator of the Joint Action and Director of the Department for Infectious Disease at the National Institute for Health and Welfare of Finland.

What influenced your decision to become involved with the newly formed Joint Action on HIV and Co-Infection Prevention and Harm Reduction (HA-REACT)?

Joint Actions stemming from the European Commission are set up to address pressing health needs both at the EU and member state levels. Topics are generally agreed to in advance, at least a year before a call for proposals goes out. Countries will thereafter nominate the partners to be involved.

Our goal was to strengthen the prevention of HIV and co-infections, including tuberculosis (TB) and viral hepatitis among people who inject drugs (PWID)

After receiving the necessary support from our government to lead on these issues, we agreed to play a critical role in coordinating the action items that were proposed by the Commission. This was primarily due to our strong holistic perspective on harm reduction and proven ability to close the gaps.

Our goal was to strengthen the prevention of HIV and co-infections, including tuberculosis (TB) and viral hepatitis among people who inject drugs (PWID). This is not to say that the path to becoming coordinator of the Joint Action was simple, there was indeed a rigorous process of presenting and negotiating the specific proposal before we were chosen.

How do you see your role as Coordinator of the Joint Action?

The role of the coordinator is primarily to be a facilitator ensuring that all participants involved are seeing through the mission of the project. As coordinator it is necessary to plan how to set up the objectives and provide ongoing support in order for the objectives to translate into actual implementation.

Additionally, one also acts as a mediator, assigning roles and tasks to those involved. The first step was to ask partners of the Joint Action to select the work packages they would best be able to direct and then identify the appropriate work package leaders from the presented proposals. From there it was a matter of coordinating the content of each package their respective budgets to ensure maximum impact to achieve the aims of the Joint Action. Today, the project is up and running and making great strides towards its goals.

Our next major step is to monitor the project´s progress and adherence to the overall project plan. Whenever there appear to be delays in the advancement of the work we endeavor to find solutions; ultimately we (and the partners) are collectively responsible for the project.

The coordinator also plays an important role in enhancing communication with stakeholders. Nevertheless, I must emphasize that most of the work takes place at the work package level and it is the work package leaders who are above all making the greatest impact.

Why focus on HIV, TB and viral hepatitis in Europe?

There unfortunately remain considerable disparities among countries in Europe, which continue to disproportionately affect the most vulnerable.

The objectives of this particular call relates to infectious diseases in Europe. Many infectious diseases are well managed and even eliminated through various interventions within the EU. In terms of HIV, tuberculosis and viral hepatitis, there unfortunately remain considerable disparities among countries in Europe, which continue to disproportionately affect the most vulnerable.

This is something that Europe must not accept. We have excellent prevention and treatment in Europe and need to not slip into complacency or fail to confront the status quo of the diseases and the problems of the most vulnerable of our society. The time has now come for the EU to lead the way to reduce the burden of these diseases in every member state.

What can we expect as a result of the work of HA-REACT?

In a word? Innovation. As a part of this project we have suggested that focus countries address these diseases using objective criteria that are transparent and evidence-based. In focus countries we can achieve comprehensive improvements in coverage and prevention efforts. Of course, each focus country undoubtedly has its own priorities which must be taken into consideration.

The project aspires to establish a sustainable impact on the coverage of harm reduction services which will lead to reduced rates of HIV, viral hepatitis and tuberculosis. We ultimately desire elimination. However, the timeframe is short and countries must first commit to make these health issues a priority. With a grounded perspective, so far we have encouraged strong collaboration, which has the potential to set countries on the path towards elimination.

What does the project hope to achieve over the next 3 years?

We hope that countries will coordinate their efforts to address these issues, and we envision the EU having a leadership role in coordinating such efforts. The EU continues to pursue HIV as an issue, and is slowly adding new diseases to the agenda, including hepatitis C virus.

This virus has been difficult to tackle, nonetheless there are now promising new treatments which can truly change the landscape of hepatitis C within the EU. Though treatment costs remain a large barrier, this has the potential to change over time in most countries.

Lastly, none of this would be possible without the concrete mechanisms of the EU, which allow a collective effort to meet the challenge of increasing harm reduction head-on and reduce the burden of disease in people who inject drugs.

Information about the project is available at www.hareact.eu 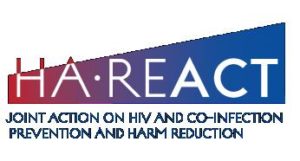