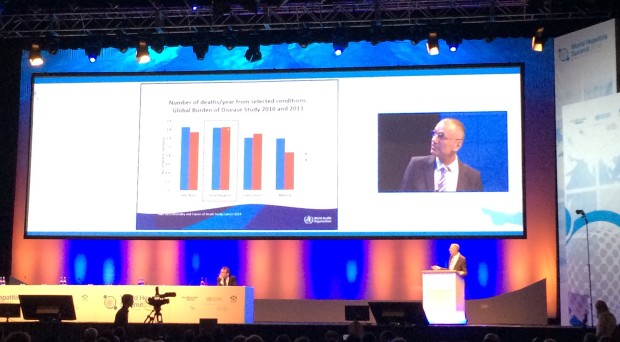 At the World Hepatitis Summit in Glasgow this week, it has been terrific to hear so many delegates talking so adamantly about the need to set our sights on viral hepatitis elimination.

While I am as excited as anyone about this prospect, I have some concerns about the language being used here and in the global health community at large. Do we all understand elimination in the same way?

My own conceptual framework is based on definitions established at the 1997 Dahlem Workshop on the Eradication of Infectious Diseases. To quote the summary of outcomes:

Elimination of disease: Reduction to zero of the incidence of a specified disease in a defined geographical area as a result of deliberate efforts; continued intervention measures are required. Example: neonatal tetanus.

Elimination of infections: Reduction to zero of the incidence of infection caused by a specific agent in a defined geographical area as a result of deliberate efforts; continued measures to prevent re-establishment of transmission are required. Example: poliomyelitis.

Eradication: Permanent reduction to zero of the worldwide incidence of infection caused by a specific agent as a result of deliberate efforts; intervention measures are no longer needed. Example: smallpox.

I have included the definition of eradication here because I have seen the term used in conjunction with viral hepatitis in ways that make me think some people regard viral hepatitis ‘elimination’ and ‘eradication’ as synonymous.

Adding a further terminology wrinkle, the World Health Organization (WHO) draft Global Health Sector Strategy on Viral Hepatitis, 2016–2021, which was published to serve as the basis of an ongoing consultation process, identifies a central goal in the following words:

If you are wondering what this means, the draft strategy delineates specific targets, e.g. a 90% reduction in new hepatitis B infections by 2030 and a 70% reduction in hepatitis C incidence by 2030.

These are laudable goals, and I absolutely want to see the governments of the world invest the tremendous energy that will be required to achieve them. However, it is worth noting that the WHO draft strategy is not calling for viral hepatitis elimination as described above, and as many would understand it