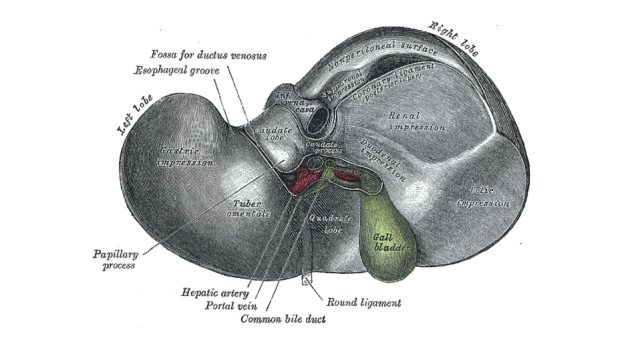 The inferior surface of the liver from Henry Gray's Anatomy of the Human Body.

I still remember the lengthy discussion. It was 2006, and I had been tapped as the World Health Organization (WHO) European office’s staff representative for the planning of “World Hepatitis Awareness Day”, as it was called back then.

The newly formed European Liver Patients Association (ELPA) was determined to raise the profile of this little-known event, and had engaged WHO/Europe, the European Association for the Study of the Liver (EASL) and other organizations in an ambitious publicity campaign.

We finally decided that a key chain displaying the World Hepatitis Awareness Day logo would be a suitable “giveaway” item. And we ordered a bulk supply of a flat wallet-sized magnifying lens, also marked with the logo. This was for advocates who wanted to protest the lack of attention given to hepatitis by public officials – the idea was for them to dramatically brandish their lenses at the appropriate moment and say that they were searching unsuccessfully for some acknowledgement of hepatitis.

I would like to say we took the world by storm. But in truth, we didn’t even take my office by storm, and the European media were largely unresponsive to our efforts.

I was quite pleased with one outcome, which might be best characterized as “unintentional stealth advocacy from within”.  I had harbored some doubts about the little magnifying lenses, but this investment demonstrated its worth when I saw a WHO regional deputy director using one several months later. She said that she kept it for reading fine print!

Have we made much progress?

Nine years on from this somewhat ragtag effort, has there been much headway against viral hepatitis and other liver diseases? My answer to this question would depend on whether you caught me in an optimistic or pessimistic mood.

On the one hand, the World Health Assembly’s first-ever viral hepatitis resolution in 2010 spurred WHO to step up and provide much-needed leadership and technical guidance. Far more people within and outside of public health circles are aware of the magnitude of hepatitis epidemics in many countries, and some governments have taken important steps toward developing effective responses. The patient-led World Hepatitis Alliance (with which HMAP is proudly affiliated) has a thriving constituency comprised of 216 member organizations in 80 countries, and is a strong catalyst for policy change and civil society involvement globally.

Then there is the incredibly exciting news in the realm of hepatitis C virus (HCV) treatment, with the latest drugs achieving such high cure rates that some people think it’s time to set our sights on the worldwide elimination of this disease.

On the other hand, there is no cure for hepatitis B virus (HBV) and no vaccine against HCV. Efforts to reduce illness and death from both diseases are hampered by the fact that many of those carrying HBV and HCV are unaware of their infection. Hepatitis A virus annually strikes an estimated 1.4 million people, and hepatitis E virus, an estimated 20 million people. Alcohol-associated cirrhosis, meanwhile, is thought to cause 384,000 deaths annually.

We need a more unified approach

Most troubling from my perspective is the lack of a unified strategic response to hepatitis and other forms of liver disease. How can policy-makers, researchers, health service providers, non-governmental organizations , patient groups, and affected communities harmonize their efforts? What can these actors contribute to each other’s work?

How can we collectively ensure that the best new knowledge is translated as quickly as possible into effective interventions?

Most crucially, how can we collectively ensure that the best new knowledge about disease prevention and treatment is translated as quickly as possible into national- and local-level interventions that will avert unnecessary suffering and death?

The impetus for launching HMAP is the recognition that no suitable forum exists for addressing these questions. The established hepatology journals are certainly publishing valuable biomedical and clinical research findings. But it is imperative to also take into account health systems and the people who make up health systems – as service providers, decision-makers, patients and members of affected communities.

What can you contribute?

HMAP seeks to publish policy and social science articles as well as basic and clinical science articles from researchers who are eager to reach a wide audience. We envision expanding the evidence base by addressing issues as wide-ranging as disease prevention and management, epidemiology, economics, health behavior, health service delivery, ethics, human rights, and the role of laws, policies and guidelines in shaping health initiatives.

We will encourage researchers working in all areas to highlight the policy implications of their findings – as well as the practical implications for health service providers and for people living with liver diseases. And we will encourage non-researchers to “talk back” via commentaries, roundtable discussion articles, conference events and innovative online platforms.

In these and other ways, we greatly look forward to fostering an ongoing dialogue between the many stakeholders who are driving progress in the field of hepatology. Think of the launch of HMAP as your invitation to a virtual meeting hall where “experts” of all stripes will come together to continue building on our achievements and collectively shape the fast-evolving strategic response to viral hepatitis and other liver diseases.

You can read more about World Hepatitis Day in a blog post from Virology Journal: War against hepatitis.