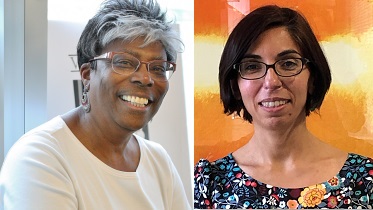 We are thrilled that our first pair of scientists is Drs. Carol Carter, Professor of Microbiology and Immunology, SUNY Stony Brook and Sebla Kutluay, Assistant Professor of Molecular Microbiology, Washington University, St. Louis.

To the next generation researchers, Dr. Carter notes that being both a gender and ethnic “double minority” in academic research, brings both overt and covert hurdles and challenges, but also provides a unique opportunity to attain a network of friends and supporters who are highly diverse in gender, ethnicity and geographical origin. She believes they provide her with perspectives that broaden her both scientifically and personally.

Sebla Kutluay: Such a pleasure to be having this inaugural interview series with you today. Let’s start with learning a bit about your background, in particular whether you were always into science, chasing animals in your backyard as a kid maybe?

Carol Carter: Oh no, absolutely not! I always think that one of the reasons why I became a “micro”biologist was because I definitely was not into chasing animals. Even the deer in my backyard, I’d like them at the zoo, but not really in my backyard. As a first year graduate student, I had a very lucrative job paying $8/hr working for a couple of immunologists to gather ascites fluid. At that time, $8/hr was considered “big bucks”. When a mouse got sick, the littermates would hide him/her underneath the straw. So you can imagine that there were many traumatic moments when I discovered half-eaten body pieces and that really solidified which biological systems I would ultimately choose to work on, viruses, cells, etc. in other words, basic science…

SK: And a virus that does not have a good animal model… So then, when did you first realize that you wanted to become a scientist?

CC: Well, really I have to say that there was probably some priming done, as one of my earliest recollections is the encouragement received from an elementary school teacher that I had for the 4th, 5th and 6th grades. He used to give me old books that the library was getting rid of. One of them was called “The Book of Inventions”. It was tattered and had a brown hard cover. It was absolutely fascinating to read about the way people stumbled onto the things that they discovered. So, I would say there was some priming early on and then in high school that maybe got more focused.

SK: So then, if you hadn’t gotten those books, what would you have become?

SK: That’s funny as I always also tell people that if I were not a scientist and had talent, I would become a singer! At least you didn’t say you would become a doctor.

CC: Oh, no way! I mean, between the glamor gowns and the fun, what better profession would there be? As a matter of fact, my first year of graduate school was as much a fun year as it was an unusual year. It was the first time Yale had admitted a graduate class of 6 girls and only 1 boy as opposed to the other way round. So we definitely bonded and we are still friends today (Fig. 3). We put on a first year talent show where we substituted science lyrics for verses in The Sound of Music: We cast our department chair as the autocratic but kind Baron von Trapp and our faculty as the von Trapp children. It was great fun because it let me do all the things I like doing!

SK: We heard about your motives getting into microbiology, but tell us more about how you got into virology, retrovirology and HIV over the years.

CC: I started off studying bacteriophage because I found phage super fascinating but I really didn’t get along with my first advisor in graduate school. When I went to the chair of the department and told him that I had to get out of that lab, he considered me a heretic but permitted me to do so. So, for my second advisor, I chose a person who was 180 degrees different from the first one in just about every aspect.

The most pertinent attributes were (1), he was a seasoned animal virologist – an epidemiologist who studied measles virus infections in indigenous populations in Brazil – who wanted to expand to basic virological research and (2), he was very game and adventuresome. He took me to meetings with him and he introduced me to his peers, who were senior faculty, exposing me to people whose names were in the textbooks of that time! And I think that he was very indulgent in letting me read the literature and figure out how to ask questions.

One of the people he introduced me to, who was critical to my becoming an animal virologist, was Matthew Scharff at Albert Einstein University, now a member of the National Academy. Matty Scharff introduced the field to HeLa cells for cultivating animal viruses. As a postdoc, I was very interested in reoviruses because they were so unique with their double stranded RNA genome so I joined the laboratory of Aaron Shatkin. Fortunately for me, it was after I had achieved tenure to Associate Professor that the funding for reoviruses got very difficult because, although they were really interesting because of the double strandedness of the RNA, they did not cause any widespread disease. I knew it was time to switch fields when a NIH Program Officer to whom I had whined about funding said to me (and I quote), “Carol, NIH is in the business of funding health, not interesting science”. Lol.

Continue to read the full interview in Retrovirology 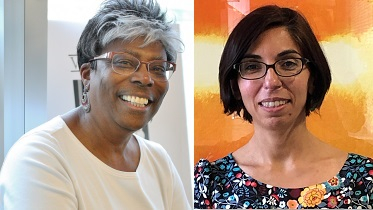 Carol Carter, PhD, is a professor in the Department of Microbiology and Immunology at Stony Brook University Renaissance School of Medicine, USA. She obtained her PhD at Yale University under the mentorship of Drs. Francis Black and Ann Schluederberg studying measles virus replication and pursued postdoctoral studies on reovirus in the laboratory of Dr. Aaron Shatkin at the Roche Institute of Molecular Biology. She established her independent career at Stony Brook University in 1975 and entered the world of HIV/AIDS research in the 1980’s where she has contributed to understanding of retroviral protease activation, capsid structure and assembly and engagement of Tsg101 and ESCRT machinery, in hopes of translating bench observations to antiviral drug development.

Sebla B. Kutluay, PhD, is an assistant professor in the Department of Molecular Microbiology at Washington University School of Medicine, USA. She was born and raised in Turkey. After completing her undergraduate studies in Turkey, she obtained her PhD at Michigan State University under Dr. Steven J. Trizenberg’s mentorship studying chromatin regulation of herpes simplex virus genomic DNA during lytic and latent infections. Dr. Kutluay conducted her postdoctoral studies in the lab of Dr. Paul Bieniasz at Rockefeller University, where she made seminal discoveries in HIV-1 particle assembly, maturation, selective genome packaging and virus-host interactions. She established her independent group in 2015 and continues to study how several viral and host RNA-binding proteins regulate HIV-1, and more recently SARS-CoV-2 replication.

Latest posts by Carol Carter & Sebla B Kutluay (see all)