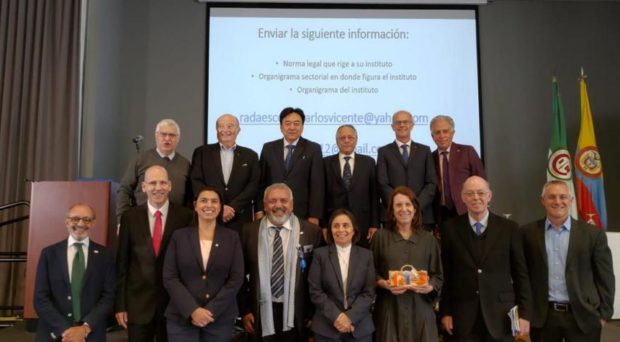 The organizer Dr Carolina Wiesner Ceballos, Director of the Instituto Nacional de Cancer (NCIC) invited RINC –ALC  members from  Brasil, México, Argentina, Bolivia, Chile, Panama, Paraguay, Peru and Uruguay. In addition, representatives of UICC, OPS/OMS of the country and the Region, RINC´s exdirector, its executive secretary, and the Director of the Istituto Nazionale Tumori – IRCCS Fondazione Pascale from Napoli (Italy) attended the meeting. The objectives of the network was to compare the different National Cancer Institutes models for cancer control, its relation to their States and with the Ministry of Health, and finally their capacities to promote public value beyond their clinical perspective.

The initial Network of National Institutes and Institutions of Cancer (RINC) was created in 2011, among the members of the Union of South American Nations, also known by its acronym UNASUR; it was created as a strategy of articulation and cooperation between public institutions, nationwide. It was responsible for developing and promoting the execution of policies and programs for cancer control in the region particularly the implementation of new technologies for Cervical Cancer Control.  The results achieved in these years were: first, the creation of a Latin America bio-banks network to promote cancer research among institutes; second, development of strategies to strength Population-based Cancer Registries (PBCR) among Latin American countries as a valid methodology for achieving a comparative analysis of cancer incidence within the region.

In 2018, most of the countries members of UNASUR withdraw from this union because of political reasons. Taking into account the increasing incidence of cancer among the Region, National Cancer Institutes of Latin America decided to maintain their network as an independent group. That is why, in order to continue their aims, a new NETWORK was signed among countries now named RINC ALC. Some further aims are: to improve human resources capabilities for cancer control, to promote the execution of translations medicine projects using biobanks samples currently stored and third, to promote PBCR as a gold standard in order to validate administrative health data delivered as mandatory from health security systems.

Last year, NCIC was the first Latin American Institution accepted as a member of the European Organization of Cancer Institutes (OECI); the idea is to promote this cancer network model among Latin American Institutions. In addition, the collaboration with the World Alliance of Oncological Networks (Alianza Mundial de Oncología en la Red – AMORE), will allow a global collaboration to achieve this purpose and further ones with scientific and clinical Institutions to fight against Cancer.