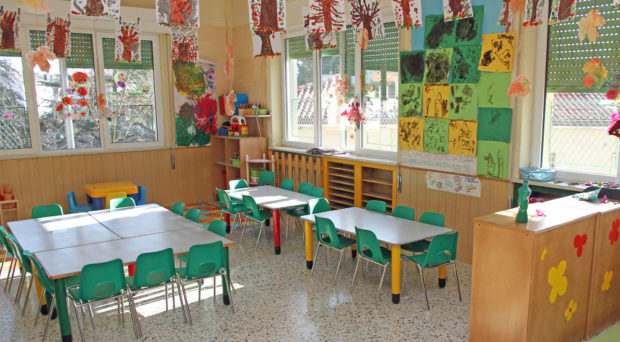 The researchers studied the airborne bacterial and viral microbiome of a daycare center throughout the course of a year.
© ChiccoDodiFC / fotolia.com

When my daughter was born more almost six years ago and started daycare, I noticed a seasonal pattern of illnesses (e.g. colds, norovirus in winter; hand, foot, and mouth disease in fall), which were eventually passed to my wife and me, causing numerous missed workdays.

Knowing that many childhood diseases are caused by viruses that can be transported either through the air or the oral-fecal route, I became obsessed with determining which viruses were actually floating in the air and if there was seasonality to the microbiome. Coincidentally, the Alfred P. Sloan Foundation’s Microbiology of the Built Environment had their first call for postdoctoral fellowships.

As a naïve young postdoc, I submitted a proposal to investigate the seasonal dynamics of the airborne bacterial and viral microbiome at my daughter’s daycare center, with the hypothesis that there was strong seasonality in microbial community composition. I also was very confident I would be able to complete the study within the two-year fellowship period.

Almost six years later, we are finally publishing the results on the airborne viral microbiome. When this study started, I was trying to figure out the best methods for sampling, sequencing, and analysis; I quickly realized that the airborne virome of the built environment had largely been neglected, with most studies examining bacteria and fungi.

We were able to overcome these challenges and determine the airborne virome at my daughters’ daycare center by using the filters in the heating, ventilation, and air conditioning (HVAC) system as our method of sample collection. The benefit of using HVAC filters is that a very large volume of air passes through them, and by collecting month-long samples, we were able to obtain enough viruses for metagenomic sequencing.

After we completed bioinformatics and analyzed the results, we were very surprised by our findings. Our initial hypothesis was that both airborne bacteria and viruses exhibited seasonality; however we didn’t observe any strong seasonality for the bacteria, described in our earlier publication. Viruses showed a completely different story, with strong seasonality.

We found that in the daycare, human-associated viruses were much more diverse and dominant in the winter, while plant-associated viruses were more dominant in the summer. Additionally, similar to bacteria, we found that human occupancy plays an important role (we were able to collect a sample when the daycare was closed for an extended period of time).

Although more work is needed, these patterns might be explained by building dynamics and occupant activity. For example, in the summer windows tend to be open more often, and children spend more time going in and out from the playground, while during the cold winter months windows and doors tend be kept closed so the building is “tighter.”

To our knowledge this is one of the first longitudinal studies on the airborne virome in the built environment. Future work is needed to examine the effect of seasonality on the microbiome of airborne viruses in different climates. Additionally, source-tracking studies are needed to determine where viruses in the built environment are coming from. Finally, examining how building design and operation affects the airborne virome is needed.

Nearly six years – and many sick days later – my family and I all have stronger immune systems, and our study has provided a starting point for understanding the seasonality of the airborne virome in the built environment.

Dr. AJ Prussin attended Virginia Tech for his B.S. in Biochemistry and Ph.D. in Plant Pathology. He received an Alfred P. Sloan Foundation postdoctoral fellowship in the Microbiology of the Built Environment (MoBE) Program, to study the seasonal dynamics of the airborne microbial communities in a daycare center.
He is now a Research Scientist and the Associate Director of the Center for Science and Engineering of the Exposome (SEE). The overall goal of SEE is to harness engineering approaches to develop a fundamental understanding of the human exposome and the means to control it for the purpose of advancing public health, energy savings, and water sustainability.
Dr. Prussin’s work applies an interdisciplinary approach to answer questions regarding the aerobiology and airborne transmission of pathogenic and non-pathogenic microbes in the built environment.