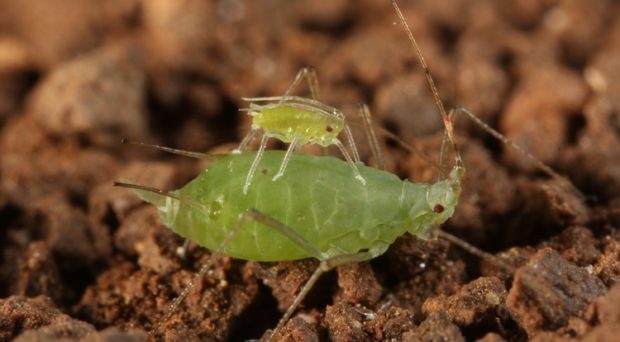 Mankind has been battling aphids since the beginning of the prehistoric agricultural revolution. These small sap-sucking insects that are to most people nothing but tiny dots that kill off their plants, cripple crops and vector plant viruses all over the world. How then, with all our technology and sophistication, do we still suffer billions of dollars in damage to our food crops every year? 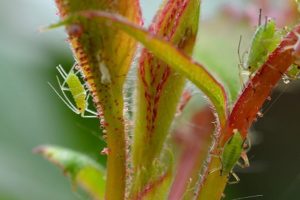 The simple answer is that the ~5,000 species of aphids alive today have had over 200 million years of evolution to refine their armory. In every generation of aphids, natural selection favored the tougher aphids and the outcome of this very long process is a super-pest that possesses many remarkable survival mechanisms. 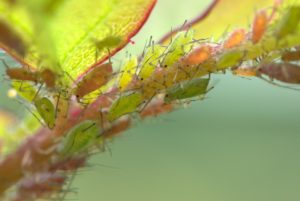 For example, aphids have an unprecedented rate of reproduction: in some species, females can give birth every two hours and to make things worse, they are actually born pregnant. They do this by making only self-reproducing females throughout spring and summer. By giving up on all the he-she business and not having to postpone pregnancy until they are sexually mature, aphids have become rapid assembly lines for more aphids.

Many aphid species also have an impressive ability to detect approaching enemies and escape in the nick of time. These enemies include predators and parasites, but since aphids live on the food of other, bigger plant eaters, they are constantly prone to unintentional predation by grazing mammals. Some aphid species can actually sense the warm and humid breath of a foraging mammal and drop to the ground right before their host plant is eaten. Most often, this leads to numerous aphids of different ages walking on the ground, hurrying to get to a new host plant before they starve to death or fall prey to patrolling predators such as ants.

While studying the emergency escape behavior of pea aphids we noticed that after dropping to the surface, some of the very young aphids manage to quickly climb on the backs of adults and then “piggyback” on them, while the latter start walking in search of a new host plant.

Adult pea aphids are quite agile, capable of passing over cracks, clumps of soil, stones, twigs and fallen leaves that normally cover the ground. However, for newborn aphids, walking on the ground is a whole different ball game; to them, every stone is a hill and every crack in the soil a chasm. Therefore, young aphids should benefit from riding on adults, even if the riding lasts only part of the way to a suitable host plant. But how exactly would the young benefit from riding on adults? 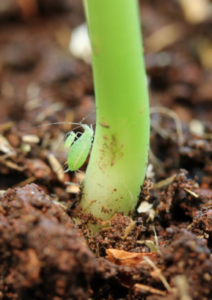 In a set of laboratory experiments using simplified, paper-covered arenas, we found that young aphids riding on adults reached a host plant over 4 times faster than those walking on their own. On natural soil covered with stones and plant debris, these differences may be even greater. After reaching a host plant on the back of an adult, the young aphids always disembarked on the stem and resumed feeding.

But could the young also benefit from a potential better ability of the adults to detect host plants from a distance? We found no evidence to support this. Does this mean that out in the field adult aphids do not have a better ability to detect host plants than their young? Not necessarily. One must take caution when extrapolating laboratory experiments to the real world and in this case, further research is needed for answering this question.

One must take caution when extrapolating laboratory experiments to the real world.

Interestingly, the adults did not seem to like being climbed on. Often they were observed trying to shake off the young, especially when being mounted by several newborn aphids. This slowed down the adults, which usually did not start walking until only one young remained on their back.

In addition, we tested whether relatedness between adults and young affected the frequency of this interaction, and found no relation between riding behavior and kinship. Therefore, this behavior does not seem to be a form of maternal care.

We therefore concluded that when an aphid colony drops off the plant after detecting an approaching plant-eating mammal, young aphids hurry to climb on adults. The adults, in their turn, do whatever they can to remove most of the young from their body. Those young that manage to stay on an adult will benefit from its superior walking ability on natural terrain.

New discoveries on the ecology of aphids, even if they do not directly lead to novel eradication methods, help us understand how sophisticated these tiny creatures are. So as we struggle to kill them, every now and then we should pause momentarily to appreciate the wonders of evolution, even when they become a nuisance.

Moshe Gish is a Senior Lecturer in the Department of Natural Resources and Environmental Management at the University of Haifa. He studies insect ecology and focuses on behavioral adaptations and on novel strategies for the conservation of insects in natural ecosystems.