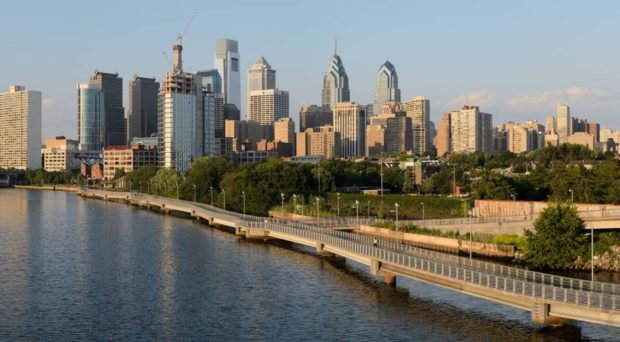 Not only is cell biology on the table this week, but the practice of science in all guises, remarks ASCB President Pietro de Camilli in his opening address: research, outreach, collaboration, and professional development.

Particularly, a showcase for the international nature of science, evidenced by EMBO Director Maria Leptin taking to the stage to represent EMBO joining the ASCB’s annual meeting.

Leptin noted that program chairs born in Europe and working in the USA, and vice versa, provided a fitting mirror to the openness and inclusivity of science, ‘despite these challenging times’.

The complementary nature of straight research and the melting pot of ideas and innovation needed for scientific progress were demonstrated nicely in the Keynote talk by Cori Bargmann.

After 20 minutes outlining recent work from her lab using C. elegans as a model to study neuromodulators in behaviour, Bargmann switched to her role as President of the science arm of the Chan Zuckerberg Initiative, introducing their ambitions to cure, prevent or manage all disease within 80 years; by supporting all facets of the scientific process.

Taking steps to cure, prevent or manage all disease within 80 years

Wryly noting that unless expectations on improving lifespan are exceeded she might not be in a position to evaluate the long-term success of the claim, Bargmann outlined the steps the initiative is, and will be, taking in its pursuit of these goals.

In a visually stunning talk to open the main symposia, Jennifer Lippincott-Schwartz also encouraged collaboration, inviting people to get in touch – or pop downstairs to the exhibitor booth – for access to the microscopy technology behind the dazzling imaging she presented on the spatial organisation of the packed cell and its organelles.

Packed cells, and packed programs too. The very numerous ‘pre-meeting’ special interest subgroups necessitated footwork through the Philadelphia’s giant convention centre that Rocky Balboa would be proud of to catch talks of interest.

One session presented the latest updates to the Human Protein Atlas (HPA) an ambitious project to map all human proteins, at the levels of Cells, Tissues and Pathology, and now in collaboration with the Chan Zuckerberg Initiative.

The project requires dependable tools – antibodies specific for particular proteins, but the reliability of antibodies – or lack thereof – is a major current issue for reproducibility in science.

Director of the HPA, Mattias Uhlen emphasised that the newest release (December 1st) of the project contains extensive validation data, in line with proposals from the newly-convened International Working Group for Antibody Validation.

Across the road, the audience in the Emerging Models session were treated to talks on the longevity of the naked mole rat, regenerating axolotls, sucking parasites and more – harnessing the unique biology of such organisms to answer fundamental biological questions.

The Oscars of science

Mention must also go to the “Oscars of science” – the Breakthrough prize awards – live-streamed to the conference from Silicon Valley; hosted this year by Morgan Freeman, and with the glitz of a Hollywood ball (prize presenters included Olympic great Katie Ledecky, Mila Kunis, and Miss USA Kára McCullough).

The prize(s) recognises outstanding achievements in all areas of science, with the Life Sciences section chaired by Cori Bargmann and funded in part by Zuckerberg and Chan. Winners of the 2018 prize were announced as Joanne Chory, Kazutoshi Mori, Kim Nasmyth, Don Cleveland, and Peter Walter.

It takes a village

Amongst the prize-winning talks from the conference itself, Scott Emr and Maya Schuldiner highlighted the importance of family, scientific and otherwise. Scrolling slides with pictures of all past lab members and collaborators – “it takes a village to make a scientific discovery” – resonated with the opening address on day one.

A well-organised town perhaps, judging by the view across the boards of posters in the Learning Center (exhibit hall), interspersed with commercial booths, beanbags, and ‘theatres’. Echoing across the hall, these held the ‘micro’-symposia – to complement main and minisymposia in the program – and beyond that, 2-minute ‘elevator pitches’, in a challenge for snappy science communication.

“I’m a scientist- ask me about my research!”

With advocacy in full flow – attendees ventured out to nearby bars, wearing t-shirts emblazoned with “I’m a scientist- ask me about my research!” – alongside terrific talks, the conference provided a positive nearly-end to the year.

Senior Editor at BMC Biology
Graham received a PhD in Developmental Biology from UCL/Cancer Research UK in 2014. He joined BMC in 2015 to become a member of BMC Biology's editorial team, where he is a Senior Editor.