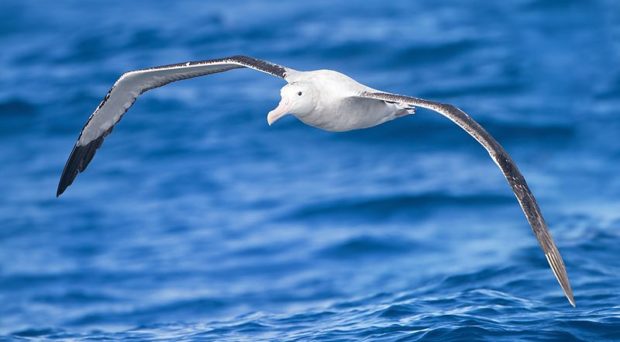 A wandering albatross in flight.
JJ Harrison, via Wikipedia

Tell us a little about your work on seabirds.

My work with seabirds has been mainly focused on the foraging ecology, migration and conservation of pelagic species (petrels and albatrosses). I am particularly interested in understanding their movement patterns, and how they optimize their search for food and migratory routes. Most of my work relies on tracking individual birds using devices such as GPS and geolocators.

Part of my recent work, as Senior Marine Scientist at BirdLife International, is to use tracking data to identify priority sites for the conservation of seabirds worldwide, and advocate for their effective conservation. BirdLife manages the Seabird Tracking Database on behalf of more than 160 scientists from 22 countries. This database represents a preeminent example of cooperation between scientists and conservationists.

Why have we seen declines in the populations of many seabirds in recent years?

Most of the declines in seabird populations that we’ve witnessed in the last decades can be attributed to two major causes:

1) the incidental bycatch in longline, gillnet and trawl fisheries (estimated to affect around 40 % of all threatened seabird species, and primarily responsible for the steep decline of many albatross populations)

2) predation by invasive alien species (such as rats, mice and cats in islands), affecting ca. 75% of all threatened seabirds.

However, seabirds face many other threats, both at-sea and in the breeding colonies: overfishing and/or inappropriate spatial management of fisheries (a well-known example is the population decline of the African penguin, after the depletion of sardines and anchovies through commercial exploitation), pollution, hunting and trapping, human disturbance, infrastructural development on breeding areas, energy production, mining and climate change (through sea-level rise, changes in prey distribution and in wind patterns).

How widespread are these declines in seabird populations  – are they occurring in just a few species, or are seabirds as a whole under threat?

Seabirds are the most threatened bird group and their status has deteriorated faster over recent decades. Almost one third of all species are currently threatened (i.e., classified as Critically Endangered, Endangered or Vulnerable in the IUCN Red List), and an additional 12% are near threatened. The declines are widespread across regions, but the most threatened groups are the albatrosses (all the 22 species threatened or near-threatened), the penguins (15 out of 18) and the gadfly petrels (30 out of 39).

How important are seabirds to the overall health of the oceans?

As top marine predators, seabirds play a key role in oceanic ecosystems. They consume ca.70 million tonnes of food every year, an amount that is similar to the global fisheries landings. Therefore, seabirds are important regulators of the marine environment via top-down effects. The major consumers are, by far, krill predators such as the macaroni penguin.

How much can research on the ecology of seabirds (e.g. their foraging and migration patterns) help us understand how better to conserve them?

Research on seabird ecology is fundamental for their conservation. Tackling some of the major at-sea threats, such as by-catch and overfishing, requires detailed knowledge of their foraging behaviour and distribution. Most of the data collected by universities and research institutes worldwide have also been used to identify the oceanic areas of higher risk of interaction between seabirds and fisheries, and to canalize the conservation efforts to the most problematic zones.

An example of such work is the establishment of the Albatross Task Force to address the problem of by-catch in the southern oceans. The scale of success of this effort has been demonstrated in South Africa, where the team worked with industry and government in the hake trawl fishery to achieve a sustained reduction in albatross bycatch of 99% over a six year period.

How confident are you that we can stem these declines in seabird populations? What wider actions should we be taking to better conserve them?

Recent experience shows that it is possible to address some of the major problems faced by seabirds, and start reversing the actual trend of decline of many species. Apart from the successful examples of the reduction in by-catch, the conservation community has achieved other major goals, such as the eradication of invasive alien species in some of the most important seabird colonies.

Much work has still to be done, however. Regarding the by-catch problem, we are still understanding the magnitude of the impact of other types of fisheries such as gillnets (which is thought to be a major threat for many species, including some highly threatened penguins). Some immediate work is also needed for the spatial planning of the marine environment, with a big challenge in the regulations of areas beyond national jurisdiction. In this sense, the knowledge gathered for the seabird distribution can play a major role, as this is one of the best known groups of pelagic species.

Maria Dias is currently the Senior Marine Science Officer at BirdLife International, based in Cambridge, UK. After a PhD on conservation of estuarine areas for wintering and migrating shorebirds (in Tagus Estuary, Portugal), she did a post-doc research on individual flexibility of migratory behaviour of seabirds.

In BirdLife International she coordinates the scientific work underpinning the BirdLife International Marine Programme, and she’s the responsible for the Seabird Tracking Database, a collaborative project of more than 160 seabird scientists worldwide. She’s still collaborating with scientific projects involving seabird tracking carried out in Selvagens and Desertas, Portugal (Project Calonectris and Project Bulweria).

Maria Dias is currently the Senior Marine Science Officer at BirdLife International, based in Cambridge, UK. After a PhD on conservation of estuarine areas for wintering and migrating shorebirds (in Tagus Estuary, Portugal), she did a post-doc research on individual flexibility of migratory behaviour of seabirds.

In BirdLife International she coordinates the scientific work underpinning the BirdLife International Marine Programme, and she’s the responsible for the Seabird Tracking Database, a collaborative project of more than 160 seabird scientists worldwide. She’s still collaborating with scientific projects involving seabird tracking carried out in Selvagens and Desertas, Portugal (Project Calonectris and Project Bulweria).