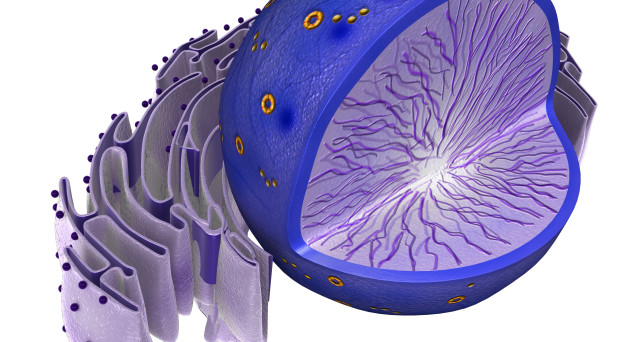 Ever since people started looking at cells under microscopes in the 19th century it has been known that under certain circumstances chromosomes adopt specific arrangements in the nucleus. A functional interpretation of these arrangements was hindered by the technology available at the time, meaning that chromosomes could only be seen under a few very specific conditions.

It also didn’t help that people didn’t really know what chromosomes were for. During the 20th Century, people discovered that chromosomes contained the genetic material, and further that the chromosomes were linear arrays of genes interspersed with control sequences which were involved in turning the genes on and off. It was clear that the linear relationship between the control sequences and genes was important, but also, at least in some cases, the three dimensional arrangement – how they were arranged in space in the nucleus – played a part. Again, however, the limitations of the available technology prevented a full understanding of this progress. In recent years, technological advances have led to a huge increases in our knowledge of these processes. To mark this, in August, Genome Biology published a special issue on the three dimensional organization of the nucleus.

Some of the improvements have been in microscopy, where dramatic increases in the achievable resolution mean that chromosome interactions can be probed at a much finer scale. But the main technological advance has been the development of chromosome conformation capture and related techniques, such as the high throughput Hi-C variant. In these experiments, DNA sequences that are close together in space get joined together, and by sequencing it is possible to identify sequences that are widely separated on the chromosome have ended up next to each other. Ferhat Ay and William Noble review methods for analyzing Hi-C data, Takashi Nagano et al. compare results obtained with standard Hi-C and a modified variant showing how the new protocol improves resolution and reduces artifacts, and Pelin Sahlen et al. present a method based on Hi-C which enriches for interactions between promoters and enhancers.

Since people first started performing Hi-C, they noticed that some aspects of nuclear organization correlate with specific epigenetic modifications. Hi-C is a laborious and expensive technique, but ChIP-seq to map epigenetic modifications is relatively cheap. In addition, there is a lot of ChIP-seq data from a wide range of cell types already available. It would be therefore useful if it were possible to reconstruct three dimensional organization from epigenetic data. Two methods in the special issue attempt to do just that. Jean-Philippe Fortin and Kasper Hansen’s method can reconstruct ‘A’ and ‘B’ compartments (corresponding to open and closed chromatin) from DNA methylation data, and Jialing Huang et al. show that one can predict chromatin interaction hubs and topologically associated domain boundaries from histone modification data.

The X chromosome has proved a popular subject in the special issue. In mammals, females have two X chromosomes and males only one, so female cells inactivate one of the two in order to even up the expression levels of genes expressed from the X. Silencing of the inactive X is controlled by the non-coding RNA Xist, and Philip Avner and colleagues discuss what is known about this process and how Xist affects the structure of the inactive X. Xinxian Deng et al. show that the active and inactive X chromosomes adopt different structures, and Hendrik Marks et al. explore the structure of the various domains of the inactive X, and how the few genes which escape silencing are clustered together.

Of course, looking at the structures of chromosomes is interesting, but what is more interesting is what is organizing the structures and what the functional implications of the organization are. A study that addresses the former is Elena Pugacheva et al.‘s study looking at the protein CTCF and its paralog BORIS and how they interact (CTCF is known to be involved in looping parts of the chromosome). Sehrish Rafique et al. look at how nuclear organization changes as breast epithelial cells become cancerous.

It is not possible to highlight all of the articles in the special issue individually, so go to the issue page to see what else we have published, including several excellent reviews. We also have several articles in the pipeline, so keep checking the page over the next few months to see what exciting research we publish.

Indeed. Knowing the structure of chromosome is interesting, and Someday maybe we can see this process just like watching movie, that’s really exciting.