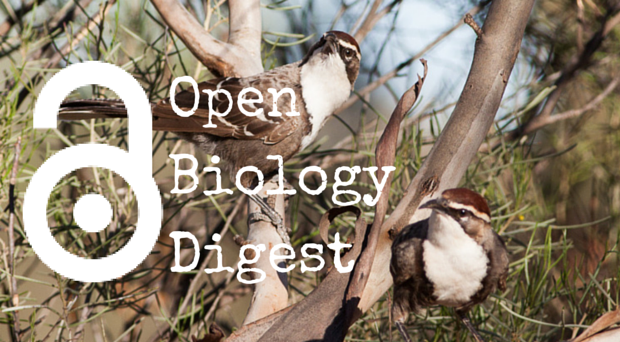 Chestnut-crowned babblers mean what they say

However, this research provides evidence in the chestnut-crowned babbler bird. The researchers analyzed the acoustic sounds they made, observed the species in their natural habitat and created playback experiments where they could test the sounds.

They find that although the bird uses the same acoustic elements (A and B), they use them in different arrangements (AB or BAB) to create two distinct vocalizations. Adding or eliminating just a single meaningless acoustic changed the meaning of the vocalization.

This suggests that humans are not the only species to rearrange sounds to create new meaningful signals.

Drosophila are often used as a model in scientific research and so understanding their growth and development is not only interesting to researchers, but also important in terms of relating this to other animals and even humans.

Here, the focus of the research was the wing, and how this forms its very specific, adapted shape. What is found is that patterned constraints exerted on the tissue by the extracellular matrix are vital to force the tissue into its correct shape.

Their work presents a mechanical model describing the relationship between epithelial stresses and cell dynamics – and how the interchange between the two reshapes the wing.

Bacteria, fungi, viruses and nematodes are all pathogens that plants are at risk of being ‘attacked’ by. Because of this wide range of possible infecting pathogens, plants have adapted to develop specific immune signals to help defend against infection.

As the climate changes, pathogen ecosystems are also changing, and many may be able to inhabit areas they haven’t before. Plants, including crops, in these new areas would not have been exposed to the pathogen before and thus would not have evolved a resistance to it. If vital crops start dying because of this, it is important to understand how this could be prevented.

Salicyclic acid (SA) is used as an immune signal in plants. In response to pathogen infection, the concentration of SA rises and many studies, via exogenous addition of SA or impairment of SA biosynthesis with mutations, have found this corresponds with elevated expression of antimicrobial pathogenesis-related genes and enhanced disease resistance.

This study finds that certain Arabidopsis crosses have an increased resistance to a biotrophic bacterial pathogen. Furthermore, this was due to several SA biosynthesis genes in the plants being upregulated, leading to higher SA levels and higher resistance.

One of the most obscure arachnid orders is the Ricinulei. This is a group of arachnids also known as hooded tick spiders because of their cucullus, a hinged plate acting as a hood over their mouthaprts.

Despite a fossil record dating back to the Carboniferous, Ricinulei have remained an under-sampled group of arachnids. With a total of 76 living Ricinulei species, there are three accepted genera and the evolutionary relationships and phylogenetic position of these remains speculative.

This study revisits the internal phylogeny and presents the first phylogenomic study of the three genera. They find that the Ricinulei has remained largely unchanged over 100 million years and that their phylogenetic pattern may even be able to trace old continental movements.

This suggests that this arachnid group is more complex than previously thought and more should be done to understand how they evolved to get to where they are today.

Studies of anthropogenic noise underwater and its effects on marine life have largely focused on baleen whales due to their good hearing at low frequencies. However, noise may affect other species differently; particularly small toothed whales, yet these have been neglected due to their poor low-frequency hearing.

Here, scientists conducted an exposure study where the behaviour of four porpoises was logged while they were exposed to 133 vessel passages. They found that low levels of high frequency components in the boat noises led to stereotyped behavioural responses in the porpoises.

This is the type of noise thousands of porpoises would experience in shallow water habitats with dense vessel traffic. These results suggest that vessel noise has been overlooked so far and could in fact be a large conservation issue.