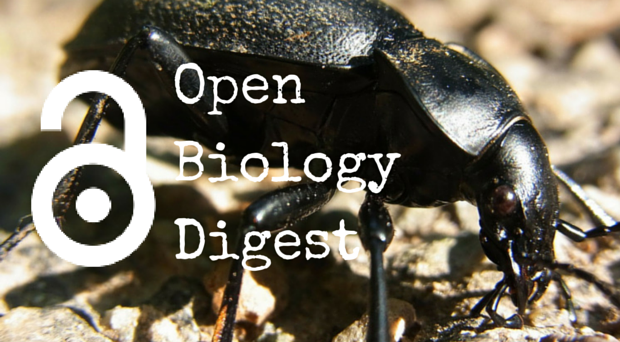 It’s hard to estimate the total number of all species that inhabit the Earth and it has been suggested that current estimates of 1.5 million are too low. To test this, authors of this research looked into the number of beetles, insects and terrestrial arthropods alone.

Beetles account for around 40% of all described arthropod species and in this study, eight methods of beetle number estimation are compared. One of which is a new method, building on the observation that larger species are often described before smaller species.

The authors combine these techniques and present four new estimates of beetle number, with a range of estimations from 0.9-2.1 million. This narrow range indicates that there are major advances being made in honing in on the richness of this most significant taxon.

Some bird species, such as cowbirds studied here, sneakily lay their eggs in other species’ nests meaning they themselves don’t have to spend time and effort feeding their young, the other species will unknowingly do it for them. This forces the ‘host’ species to raise a ‘parasitic’ bird at the risk of their own offspring.

However, many hosts have developed the ability to identify such parasitic eggs before they hatch, meaning they can reject the egg from their nest and focus solely on their own offspring. In light of this, the reaction of wild birds to fake eggs is often studied to investigate the coevolutionary relationships between brood parasites and their hosts.

Current materials for creating these artificial eggs, such as plasticine, plastic or wood, often lead to human error. As a way of reducing this error, 3D printing may be an exciting alternative. Here, 3D printing technology was applied, leading to more precise replicas of the brood parasite’s eggs.

The artificial eggs were printed, covering the natural range of shapes and sizes of cowbird eggs, and then placed in wild robins’ nests to see how subtle differences in traits influence the host behaviour and hence egg rejection.

Previous work has shown that bed bugs are able to develop resistance to an insecticide with only one generation of selection. Following this, the same authors of this research decided to look closer at the trade-offs between life changes and resistance.

Data was collected weekly on bed bug mortality and reproductive rate and results found that following exposure to the insecticide, selection favoured males and led to a decreased life-time reproductive rate. Therefore, generation time was shortened which is in fact beneficial to the bed bugs in the presence of insecticide.

This suggests that insecticide rotation or the use of non-insecticidal control could be a more effective management strategy.

It is assumed that animal behaviour observed in the laboratory is the same as that in the wild. This was tested by comparing the behaviour of wild field crickets both in the lab and in their natural habitat.

The traits focused on here, as well as in many other personality studies, were shyness, activity and exploration. Crickets were observed in the field, and then the same individuals were captured repeatedly to measure their behaviour in captivity.