The field of mobile DNA is currently a very exciting area of genetics and genomics research. It was once assumed that transposable elements were useless DNA sequences that incorporated into host genomes, forming ‘junk DNA’. In recent years, however, the significance of these genetic elements has been increasingly realized, with studies regularly being published hinting at the function of transposable elements in the host genome. 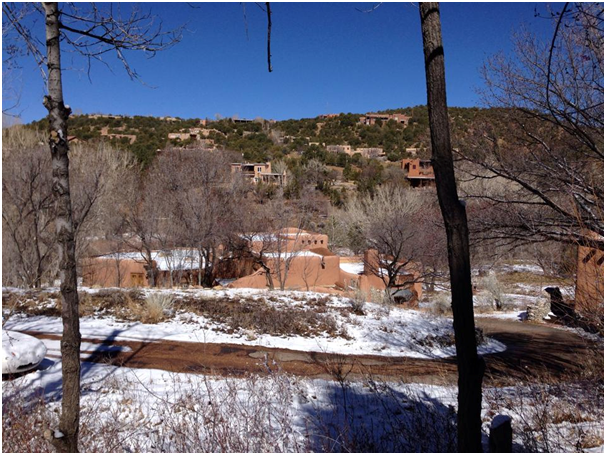 It seems that some of these suspected functions are damaging to the host, and others may even be beneficial; either way, the contribution of mobile elements to genome evolution is now a hugely interesting area, providing new insights into the evolutionary ‘arms race’ between organisms.

On March 9-14th, BioMed Central attended the Keystone meeting Mobile Genetic Elements and Genome Evolution, which took place in Santa Fe, USA. There were some really fascinating talks, twenty of which were  by Editorial Board members of Mobile DNA. The meeting was organized by three of the Mobile DNA Editors-in-Chief, Nancy Craig (Johns Hopkins University School of Medicine, USA), Henry Levin (NIH, USA) and Cedric Feschotte (University of Utah, USA).

Long interspersed nuclear elements (LINE-1 or L1) are a group of retrotransposons that are widespread in the genome of many eukaryotes, with the average human genome having over 100 L1 copies. A Keynote talk by one of the field leaders in L1 research, Haig Kazazian (who’s also one of the Mobile DNA ed board members), discussed the association of these elements with tumorigenesis. Kazazian’s work has shown that L1 insertions are significantly increased in cancer, and also that they are increased in  precancerous lesions such as Barrett’s esophagus (which often leads to esophageal cancer).

The following day, Cedric Feschotte presented some intriguing analysis on bat genomes. Bats are very different from other mammals because of many recent waves of horizontal gene transfer. You would expect from this extra DNA accumulating that they would have large genomes, however, bats actually have very small genomes. This is due to large-chunk deletions throughout their evolution.

Looking across birds as a study of flying ability relative to genome size, Feschotte revealed that better flyers seem to have smaller genomes. For instance, ostriches are the bird with the largest genome, and humming birds have the smallest genome. Needless to say, one of these is certainly a better flyer than the other! More research is of course needed to validate this correlation and to investigate how smaller genomes might improve flying ability.

Some further interesting ideas came from Grace Wyngaard (James Madison University, USA), who discussed how billions of base pairs of recently expanded, repetitive sequences are eliminated from the somatic genome during copepod development (Copepods are a group of small crustaceans found in the sea and nearly every freshwater habitat.), in a process called chromatin diminution. This is the fragmentation and excision of large amounts of DNA from pre-somatic cell lineages, most of which is composed of transposable elements. Although this is rare in the animal kingdom, it is (interestingly) phylogenetically widespread, existing in copepods, nematode, ciliates and other non-closely related genera. This evolutionarily convergence demonstrates a significant benefit to chromatin diminution in species. Wyngarrd proposed that chromatin diminution may remove deleterious transposable elements, and also be a way to sequester chemicals needed for DNA replication, since these organisms grow in nutrient-poor environments.

What was noticeable at this meeting was the increasing interaction of other fields with the mobile genetic elements community. Many researchers from areas such as epigenetics, RNAs, evolutionary biology, developmental biology and virology were attending and speaking at the meeting. It is clear that many areas of research are now leading labs into studying the impact of transposable elements on physiology and phenotypes in order to answer questions that couldn’t previously be explained.

For a field that is so classically associated with simple organisms, the talks were very human and eukaryote focused. It is clear that since we now have the technology to properly study mobile elements in humans and animals, the gates have been opened to translational research opportunities.

The biotechnological application of some biological mechanisms that were originally found in microorganisms, such as the CRISPR/Cas9 system discussed by Luciano Marraffini (Rockefeller University, USA) at this meeting, is a very exciting idea indeed. The exploitation of mobile genetic elements in biotechnology, including genome engineering and protein splicing, is explored in a recently published review series in Mobile DNA.

The next Keystone meeting on mobile genetic elements will take place in four years, although (do not fear!), there are several relevant conferences scheduled for 2015, including a FASEB meeting on mobile DNA in mammalian genomes that will take place in Palm Springs, Florida (USA) and an EMBO meeting in Heidelberg (Germany) on the genetic and physiological impacts of mobile DNA. Given the rate of progress in this field at the moment I’m sure they’re set to be meetings well-worth attending.