Elephants’ social skills are vital to their survival, helping them to live as part of a group. But research published in Frontiers in Zoology this week shows that African Elephants lose these vital skills as a result of human activity. Elephants that have suffered traumatic events, separation from family members and/ or translocations have a decreased ability to distinguish callers on the basis of familiarity or age-related cues.

Dr Graeme Shannon, and Professor Karen McComb with their international team compared the responses to recorded call playbacks of a population of elephants in Amboseli National Park (a relatively undisturbed group) with a population in Pilanesberg National Park (which was founded by young orphaned elephants in the early 1980s). They investigated how well these elephants are able to distinguish between familiar and unfamiliar elephants, as well as unfamiliar elephants of different ages. 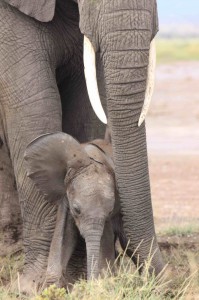 Firstly, they played recordings of calls from female elephants of different levels of familiarity (high and low association callers within the same group, and alien callers recorded from the other population). In addition to this they set to discover how well the elephants in each group could identify individuals of different levels of dominance, using synthesized calls of unknown individuals of different ages. Age is a good proxy for dominance in elephant societies, with the oldest individuals generally being more dominant.

As the authors predicted, the elephants in Pilanesberg National Park fared worse in both tasks. They were unable to discriminate between familiar and unfamiliar elephants, and did not distinguish between elephants of differing age, showing indiscriminate reactions to all calls. In contrast, the Amboseli elephants showed a more typical reaction to the playback calls. They increased bunching behaviour when presented with unfamiliar calls, and discriminated between calls relating to different age classes – showing the greatest defensive behaviour towards the oldest callers.

These differences in reactions show the long- term detrimental effects that human disturbances are having on social learning in elephants. Many conservation strategies focus specifically on population size level protection, with little focus given to maintaining social structures in elephant populations.

Dr Shannon says: “The dramatic increase in human disturbance is not just a numbers game but can have profound impacts on the viability and functioning of disrupted populations at a deeper level.” 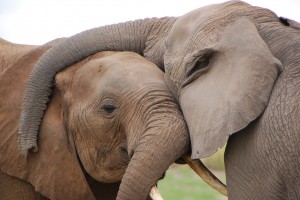 Professor McComb adds: “We previously knew very little of how crucial skills of communication and cognitive abilities that are at the basis of complex societies might be affected by disruption. While elephants in the wild can appear to recover, apparently forming quite stable groups, our study was able to reveal that important decision-making abilities that are likely to impact on key aspects of the elephant’s social behaviour may be seriously impaired in the long run.”

Dr Shannon concludes: “Our results have implications for the management of elephants in the wild and captivity, in view of the aberrant behaviour that has been demonstrated by traumatised individuals. The findings also have important implications for other long-lived, social and cognitively advanced species, such as primates, whales and dolphins.”

Human-elephant conflict is increasing due primarily to habitat loss and fragmentation as well as poaching, leading to increasing disturbances for these populations. As disruptions continue to increase, humans may be changing elephant behaviour irrevocably, causing African elephants to lose aspects of their behaviour which are crucial for survival.