Worldwide, lung cancer is the most common cause of cancer related mortality, with the incidence growing dramatically in both females and non-smokers.  Survival rates continue to remain poor, with five year survival rates at approximately 15%. This figure has remained relatively unchanged in the past four decades.

In the absence of specific treatable mutations, cisplatin-based doublet chemotherapy is the therapeutic option of choice. However, its clinical utility is over-shadowed by the large number of patients that present with intrinsic and acquired resistance. It is now becoming clear that resistance may also develop with targeted therapies such as those used to treat patients harboring EGFR or EML4-ALK mutations. 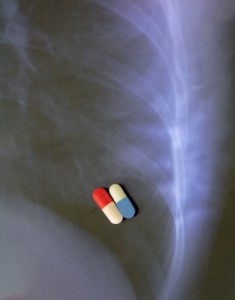 A number of studies in lung cancer have shown that adjustments in the architecture of our DNA can result in chemo-resistance. Inactivation of RAS association domain family gene 2 (RASSF2; K-RAS adaptor protein) most commonly through promoter methylation, can confer a growth advantage in cancer cells having a K-RAS mutation. Both of these changes are common in lung cancer. Clark J et al. have determined that RASSF2 down regulation plays a role in cisplatin resistance [1]. Promoter hypermethylation of IGFBP-3 also encourages cisplatin resistance and it has been demonstrated that the basal methylation status of this gene may perhaps serve as a predictor to chemotherapy outcome [2]. In-depth promoter methylation analysis in the non-small cell lung cancer cell line A549, established significant differences in methylation patterns between its’ cisplatin resistant and sensitive subtypes. Significantly hypermethylated genes included G protein-coupled receptor 56 isoform 3 (GPR56), metallothionein 1G (MT1G) and RASSF1 [3]. A recent paper in Cancer Research demonstrated that Vorinstat treatment circumvented EGFR-TKI resistance in EGFR mutant NSCLC cell lines possessing a BIM polymorphism. BIM is a pro-apoptotic protein involved in EGFR-TKI apoptosis. This mechanism involved the epigenetic restoration of BIM (BCL2L11) expression [4].

Epigenetic modifications are related to the development of chemo-resistance. Therefore drugs that can target the epigenetic regulatory machinery in terms of histone modifications and DNA methylation alterations may be an attractive option to re-sensitise to therapy.