Koalas living at the edge of their natural habitat range behave differently to those living well within in it, finds a study published in Movement Ecology this week. The research has implications for conservation, hinting that a ‘one strategy fits all’ approach is not the best tactic for animals like the koala, which straddles multiple biogeographic regions.

Koalas (Phascolarctos cinereus), with their famously selective diet of eucalypt leaves, live in southern and eastern regions of mainland Australia. But their range spans 30 different biogeographic regions, from tropical Queensland to temperate Victoria and South Australia.

Nicole Davies and colleagues tracked 21 koalas living in southwest Queensland, an area subdivided into different bioregions. They looked for differences between animals living in the more arid western edge and populations living further east towards the core of the range. 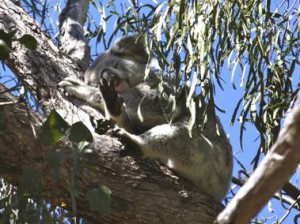 Western koalas, at the arid edge of the range, spent most of their time close to rivers or drainage lines, whilst the more eastern koalas showed more variability in patterns of habitat use. Home range size was linked to habitat quality and key resources, such as rainfall. But freestanding water sources, particularly dams, were also important to the animals. In the western Mitchell Grass Downs, a semi-arid savannah region where the drainage lines are usually dry, all of the koalas had a farm dam within or close to their home range.

The data shows how behaviour, movement and resource usage differ from the edge to the centre of the koala’s range. Conservation strategies need to take these differences into account. Plans derived from research carried out in one part of the range then uniformly applied over multiple regions are unlikely to be effective, the authors say.

This press release, and others from BioMed Central can be found here: https://0-www-biomedcentral-com.brum.beds.ac.uk/presscenter/pressreleases.