You only get one shot, do not miss your chance to blow
Eminem, 'Lose Yourself'

Hip hop has-been Marshall Mathers III may or may not have been musing on the technical challenges of single-cell sequencing when he uttered these words, but he might as well have been. Because each cell only gives up its contents one time, and any material lost during your sequencing protocol is gone forever. No pressure.

So if single-cell sequencing is such a torment, why bother? Genome Biology sent an intrepid explorer, or editor if you will, to Cold Spring Harbor's Single Cell Analyses meeting in order to find out. 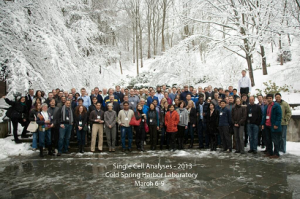 It turns out that sequencing individual genomes in a population reveals a rich tapestry of variation that is lost when analyzing the average of DNA pooled from larger cell numbers. Kun Zhang, Mike McConnell and Xuyu Cai (Christopher Walsh lab) have been applying single-cell genome sequencing to neuronal cells, finding that a subset of cells can often harbor mutations not seen elsewhere in the brain, creating a patchwork of genotypes. The Single Cell Analyses meeting took place at the same time as The Scripps Institute's Future of Genomic Medicine conference, which focuses on the field of personal genomes. The mosaicism revealed by single-cell genome sequencing serves as an important reminder that each person has not one personal genome, but many.

Perhaps the best known application of single-cell genome sequencing is the tracking of tumor evolution, where the power of single-cell analyses is leveraged against the known genomic instability, and hence within-individual variability, of cancer genomes. Jim Hicks and Peter Lansdorp have been developing methods for doing just that. Hicks spoke of the diverse genomic properties seen in cells extracted from a single tumor biopsy; major tumor clones are mixed up with 'shredded' cells, which are perhaps the detritus of chromothripsis, and with seemingly normal diploid cells, as well as cells that are intriguingly pseudodiploid.

Life begins…with a stutter
Cancer is not the only clinical area likely to benefit from single-cell sequencing, and the meeting heard that important strides are also being made in the study of embryo biology, where single-cell techniques avoid the requirement to sacrifice an embryo in order to analyze its molecular properties – an advantage of obvious benefit in the IVF clinic. Thierry Voet reported that, perhaps surprisingly, chromosomal abnormalities are fairly common in embryos; however, the affected cells are usually lost during development. Guoping Fan has used single-cell RNA sequencing to monitor the progress of zygotic genome activation with great granularity, while Chuck Zhong (Sunney Xie lab) has managed to sequence oocyte genomes at the subcellular level, leaving the remaining egg cell, together with its extra genome copies, intact.

Tumultuous transcriptomes
Meeting organizer Jim Eberwine has also been sequencing at a subcellular level, applying transcriptomics to isolated dentrites in order to study extranuclear RNA splicing. In fact, single-cell transcriptomics in some respects has much greater potential that single-cell genomics, given that transcriptome variation between cells has a far greater number of facets than does genome variation. As put wonderfully by Sanjay Tyagi, a cell population snapshot at one point in time will reveal a split between the 99%, who are transcription-poor, and the 1%, who are transcription-rich. Tyagi was savvy enough not to blame global capitalism for this discrepancy, but instead pinpointed a bursting mode of transcription, which means that short, sharp spurts are followed by long periods of inactivity.

The study of these bursts was a topic returned to by a number of speakers and poster presenters, but was far from the only application of single-cell transcriptomics discussed. For example, Sten Linnarsson has been analyzing single-cell data with the objective of identifying gene expression signatures specific to individual cell types, which he hopes will lead to the first comprehensive catalog of all cell types in the human body. Linnarsson was one of several speakers to describe new sequencing protocols and analysis methods that improve the power of singe-cell omics; it is clear that the field is still in its technology development phase.


Plumbing the depths of single cells
Although Genome Biology's strongest interest was in the omics component of the conference (which included single-cell proteomics and even single-cell DNA methylomics), impressive advances in the more technical aspects of single cell analyses, namely microfluidics (dubbed 'plumbing' by Stephen Quake lab alumnus Carl Hansen) and imaging, were also presented – including a keynote presentation from Nobel prize laureate Martin Chalfie, who informed me that the most notorious of all omics – Reaganomics – cost him a Nobel tax exemption.

Nature vs nurture
The relative contributions of genes and environment to phenotype is an age-old question in biology, and is an especially contentious one when it comes to human characteristics. Where differences are observed between monozygotic twins, it is often assumed that these must be the result of environmental factors, or perhaps random epigenetic differences. The genomic mosaicism revealed by single-cell sequencing suggests that the exclusion of genetic causes may have to be reassessed. Similarly, the stochastic behavior of some transcriptional events, as identified by single-cell transcriptomics, raises the possibility that non-genetic – but biological – contributors to the 'nature' side may not be limited to epigenetics.

Given the fast moving speed of the single-cell omics field, I am sure the speakers at the single-cell analyses day of Genome Biology's very own Beyond The Genome conference (1-3 October, San Francisco) will have much more to say on this topic. Quake, Xie, Voet and Hicks are all set to appear in a session chaired by Nick Navin. Early bird registration is still open – so what are you waiting for?

[…] You only get one shot, do not miss your chance to blow Eminem, 'Lose Yourself' Hip hop has-been Marshall Mathers III may or may not have been musing on the technical challenges of single-cell sequencing when he uttered these words, but he might as…  […]

[…] recent advances in microfluidic, sequencing and microscopy technology, single cells are currently a hot topic in many fields of biology, not least genomics – as evidenced by several recent publications […]

[…] level in all cells or is it an average of a wide range of expression levels? (Genome Biology reported from a recent single-cell analysis conference  that 99 percent of cells are transcription poor and […]