Today marks the 50th anniversary of the publication of Silent Spring, Rachel Carson’s landmark—and controversial—book investigating the effects of pesticide use on the environment. In a special Editorial in BMC Ecology to mark the occasion, David Pimentel, Emeritus Professor of Ecology at Cornell University, offers a personal reflection of the impact of the work, which was published when he was still a graduate student in the 1960’s. 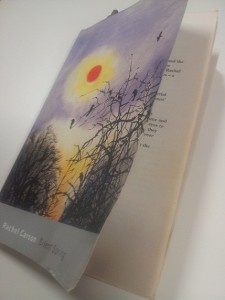 Re-reading the book today is to be immediately struck by the historical context in which it was composed. While it’s lasting legacy may ultimately have been a more thorough look into the use of chemicals such as DDT, tellingly, the first substance mentioned in its pages is the radioactive element, Strontium-90.

This was the height of the Cold War in the U.S., and it seeps through the text. In Stanley Kubrick’s 1964 Cold War satire, Dr Strangelove, one of the movie’s protagonists unveils his pet theory that fluoridation of U.S. water supplies represents a Communist conspiracy to poison the free world “without the knowledge of the individual”. Whilst Kubrick’s outrageous screenplay was clearly intended to poke fun at an increasingly paranoid sensibility, it is still possible to find eerie parallels in the reaction to Carson’s book: former U.S. Secretary of Agriculture Ezra Taft famously stated that she was “probably a Communist”.

This was not the only criticism levelled at Carson. Taft was apparently also perplexed as to “why a spinster with no children was so interested in genetics”.  The chemical companies whose products Carson criticised followed this familiar trope in an attempt to undermine her work and paint her as woman of hysteria, lacking a proper grasp of the science.

Much of this criticism focused on Carson’s lack of formal scientific training, research affiliation, and the informal language she used to outline her arguments. In truth, although Carson did not hold a doctorate, her work represents a brilliantly researched, and powerfully written piece of science journalism that resonated strongly with the public at the time.

For some, this lack of scientific formality was evidence that this was not proper science. In some ways they were correct, for it is certainly no dry slice of academic prose intended to present a balanced argument. To simply browse the contents page is to understand that this was a polemic, intended to make the public as angry as Carson had become at the state of agricultural mismanagement that she had uncovered. Chapters such as “Elixirs of Death”, “Needless Havoc” and “Indiscriminately from the Skies” leave little doubt about the stance that Carson took.

Despite this, this was not a narrowly-focused diatribe. Carson went to enormous lengths to integrate primary research, governmental reports, anecdotal evidence and first-hand accounts, to raise a fantastically powerful body of questions that ultimately would need to be answered by the agro-chemical industry and the U.S. Department of Agriculture.

Most disturbingly perhaps, was that this was a document of ecosystem mismanagement on a grand scale. Carson was not the first to highlight this, but her synthesis of the evidence was crucial. Here was evidence showing huge biodiversity loss in pursuit of the eradication of benign pests, of the loss of higher organisms through toxic bioaccumulation, of the poisoning of people and livestock, of the pursuit of profit over public health.

Perhaps the most famous legacy of Silent Spring is its influence on the decline in DDT use for pest control. Recently, concerns have been raised over this legacy, suggesting that without it, lives in the developing world have been put at risk. This is perhaps surprising, given what Carson actually wrote.

Much of Silent Spring is focused on several other derivative chemicals used in pest control – dieldrin, aldrin and endrin—whose effects Carson recognised as being far more potent than DDT. Early in the opening chapters, it becomes clear that the she, and the World Health Organisation, were also well aware of the dangers of DDT resistance among malaria-carrying mosquitoes in the developing world.

Carson never called for the outright ban of pesticides, but simply a more measured and evidence-based approach to ecosystem management. Her biggest concern was not only that chemicals were being used in an indiscriminate fashion, but that the public were not adequately informed of their use.  Perhaps the most famous quote from the book sums up her position succinctly:

“It is not my contention that chemical insecticides must never be used. I do contend that we have put poisonous and biologically potent chemicals indiscriminately into the hands of persons largely or wholly ignorant of their potential for harm. We have subjected enormous numbers of people to contact with these poisons, without their consent and often without their knowledge.”

Although it is tempting to view this as a document of pessimism, Silent Spring is alive with alternative approaches to chemical control. Carson dedicates the final chapters of the book to a thorough review of alternative, more selective, methods to tackle pests. These include Biological Control methods (the release of natural predators, parasites and pathogens) such as the Sterile Insect Technique, which involves the sterilisation of huge numbers male insects by irradiation, that outcompete their fertile wild relatives upon mass release into the environment. Rather appositely, modern advances in genetic manipulation mean that this can now be done without the need for radiation.

With the current pace of change, 50 years can seem a long time in science; in the chapter “Through a Narrow Window”, Carson discusses contemporary theories about cancer’s underlying mechanism, without once mentioning DNA. Half a century on from the alarm that was raised by Silent Spring,  echoes are still apparent in recent reports of pesticide exposure in bees, mismanagement of ocean ecosystems and, sadly, gender discrimination.

Celebrating the legacy of Carson’s voice, which still feels vibrant and clear to this day, it is clear that hers was a sharp mind with a sharp pen, and Silent Spring made a big noise.