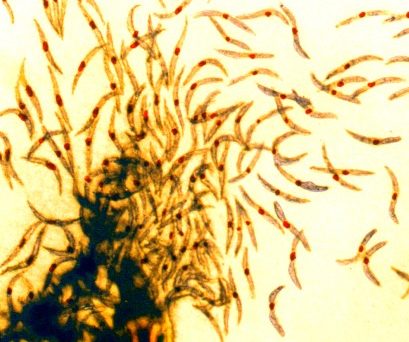 Within hours of being bitten by a malaria infected Anopheline mosquito, the sporozoite stage of the parasite has entered the circulatory system and arrived at the liver, via the portal vein. A sporozoite can move through several hepatocytes (liver cells) before infecting one. Here, enclosed in a vacuole (the parasitophorous vacuole) formed from the plasm membrane of the cell, it becomes a feeding stage then undergoes asexual reproduction to produce tens of thousands of merozoites which are released into the blood stream, initially enclosed in vesicles.

The trigger that causes a sporozoite to stop traversing hepatocytes and settle in a particular one is still unclear, but recent observations have shown that some hepatocytes may make better homes that others.

The arrangement of hepatocytes in the liver is not homogeneous. They are organised in repeating hexagonal lobules, each with a central vein and portal nodes at the corners of the hexagon.

Blood flow along the radial axis of the lobule, from the portal nodes to the central vein, produces gradients of oxygen, nutrients and hormones which creates zones of hepatocytes in which variability in gene expression and function exists.  Thus, the internal environment in the cells of some zones may better support the development of the malaria parasite than other zones.

Parasite location in a lobule

Although it had previously been suggested that the location of an infected hepatocyte along a lobule axis affects the speed of parasite development, this had not been substantiated. Transcriptomes of hepatocytes and liver-stage parasites have previously been made using bulk mRNA measurements, and a malaria single-cell atlas prepared, but these methods did not distinguish which lobule zone the infected cells came from. A improved approach was needed.

A research team, led by Shalev Itzkovitz and Maria Mota, has recently published a study of malaria infected livers which, while still using a single-cell approach, did enable them to locate the zone of origin of each hepatocyte.

Mice were injected with sporozoites of a GFP-expressing clone of rodent malaria which enabled the identification of infected hepatocytes once the liver had been dissociated and separated into individual live or dead cells in a cell sorter.

Gene expression in individual liver cells was monitored at various times post infection by single-cell RNA sequencing. The zone of origin of each cell could be determined using markers known to be associated with each zone. Additionally, parasite position was located within intact livers in single-molecule fluorescence in situ hybridization experiments.

Using single-cell RNA sequencing, a comparison between uninfected and infected hepatocytes from different zones showed upregulation in immune associated genes. Genes involved in iron metabolism were also upregulated in infected cells, possibly leading to the deprivation of iron available for parasite usage. Down regulated processes included fatty acid metabolism that might deprive the parasite of essential material for membrane formation etc. These findings were validated in the intact liver investigations.

The expression of some parasite genes was found to differ between those periportally and pericentrally situated at later stages post-infection.

Single-cell studies found more infected hepatocytes located in the pericentral zone, but the in-situ study only confirmed this at forty hours post-infection, suggesting parasites survive and develop more quickly in this zone. The authors argue this could be related to lower oxygen tension in the zones further from the periportal area as low oxygen tension is known to aid development of malaria parasites. Alternatively, it could be related to greater parasite clearance in the periportal zone, as immunological zonation occurs in the lobules.

In support of the latter argument, the single-cell studies suggested parasites in the periportal zones developed more slowly and many more failed to develop than those infecting cells in the pericentral zones.

Parasite molecules 18S are released when the membrane of the parasitophorous vacuole breaks down. If this molecule was seen throughout the hepatocyte, rather than just inside the vacuole, it indicated a dying parasite. The researchers called hepatocytes containing these parasites abortive cells. Many more abortive cells were seen in the periportal zones than the pericentral zones, their number increased with time and there was an increase in expression of hepatocyte genes involved in recruiting immune cells, suggesting removal of abortive cells over time.

Thus, although the detailed single-cell and in situ approaches used by the authors has shown that there is not a preferential invasion site in the liver lobules, the observations of abortive cells supported the suggestion that parasites do not survive so well in the periportal zone.

A word of caution

It is important to note that when infections were initiated from mosquito bites (with a much lower sporozoite inoculum) the frequency of abortive hepatocytes was much lower, indicating this finding may not have relevance in a natural setting. The authors recognise this and suggest a way forward would be to see the effect of artificially increasing pathways they found to be associated with abortive hepatocytes on the success of liver infection.