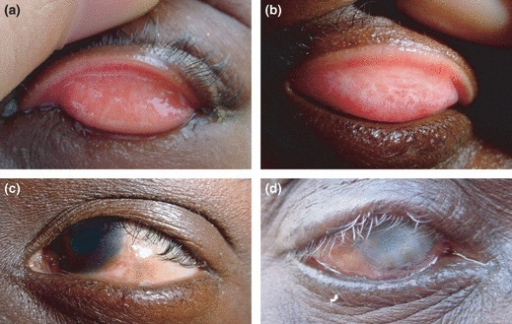 A leading cause of blindness, the eye disease trachoma, is endemic 44 countries and has caused impaired vision or blindness in 1.9 million people.

Trachoma is is the result of an infection with Chlamydia trachomatis, a bacterium that causes a roughening of the inner surface of the eyelids. The initial symptoms are similar to conjunctivitis, with low level irritation and ocular discharge. Reinfection can occur multiple times.

If untreated, recurrent infections result in more severe symptoms leading to the eyelids turning inwards with the eyelashes rubbing on the eye causing trachomatous inflammation—follicular  (trichiasis). Scarring of the cornea results in irreversible blindness.

This is a disease of crowded living conditions, poor sanitation, lack of water for washing and the presence of flies. The bacterium is spread via direct contact with secretions from the eyes or nose of an infected person, or indirectly, via clothing or transmission on the legs and mouthparts of flies.

Trachoma is particularly prevalent in children and a common site in poor rural areas of Africa is of children with runny noses and sticky eyes, often plagued by flies.

In 1993 the WHO adopted a strategy for decreasing transmission with the acronym SAFE:

With the aim of elimination by 2020, this was being implemented successfully in WHO Member States until the Covid-19 pandemic occurred. So, it is particularly gratifying to learn that, despite this disruption, the WHO has announced that trachoma is no longer a public health problem in The Gambia.

Trachoma in The Gambia

The Gambia is a relatively small country in West Africa, stretching along either side of the Gambia River, with a population that is largely rural. As long ago as 1959 trachoma was recognised as a public health problem, when a survey found over 65% of young children in one village were infected. Initial research based at the Medical Research Council’s centre in Fajara expanded to include other Neglected Tropical Disease programmes and in 1986 a nationwide survey found trachoma to be responsible for 17% of blindness cases in The Gambia. Ten years later another survey found this to be reduced to 5% , but with all regions of the country requiring intervention against trichiasis.

Agatha Aboe and her team have recently described the tribulations and successes involved in the journey to eliminate this disease from The Gambia.

Starting in 1997 with baseline mapping to identify where and who has trachoma, the Government based its programme for elimination on the SAFE strategy. It was backed by multiple partnerships, including the British Medical Research Council and the London School of Hygiene and Tropical Medicine.  Resources were provided for training health workers, providing infrastructure and vehicles and for salaries for all levels of health workers.

The heart of the programme focussed on facial cleanliness and improvement of the environment but, in addition, mass administration of the Pfizer-donated antibiotic azithromycin and eye surgery for trichiasis were provide to patients free of charge.

At ground level, the programme relied upon community volunteers, referred to as nyateros (from the Mandinka meaning “Friend of the Eye”), schoolteachers and village health workers. They were given two days training and equipped with a torch, visual acuity charts and posters to enable them to refer patients for surgery if necessary.

At the community level, various routes were used to communicate the necessity for daily face washing with clean water and soap, proper hand washing, keeping domestic animals away from houses and the proper location of pit latrines. This was aided by a government clean water and sanitation project.

Between 2001-2020, ninety-four Gambian ophthalmic nurses were trained as trichiasis surgeons. However, some poor surgical outcomes were discovered, which could have affected the uptake of surgery, and some nurses required further training.

Eventually a quarterly nationwide surveillance, performed by a supervising ophthalmologist, was instigated. A particular problem was the attrition of ophthalmic nurses, many of whom moved into midwifery for a higher salary.

Mass antibiotic treatment, preceded by community information programmes on the radio and via village health workers, was administered on a regional basis depending on the prevalence of trichiasis. This programme of screening, decision making (as to whether whole communities or just households should be treated) and treatment itself required massive manpower and was expensive.

Other problems included the extension of trachoma surveillance from school-based surveys to include madrasas, when it was recognised that active cases were occurring in these.

Monitoring cases to fulfill the two WHO requirements for confirmation of elimination challenged the Government because of the different age profile for their two criteria. When the elimination of active trachoma was achieved (predominately in children), nation-wide surveillance was stopped, precluding monitoring for elimination of cases of trichiasis in adults. Additional trichiasis surveys then had to be conducted.

Monitoring and continuing surgeries will inevitably need to be continued.  However, using the WHO SAFE strategy for elimination of trachoma, The Gambia is to be congratulated in achieving its goal ahead of the new target for global elimination by 2030. The challenges it encountered are likely to be shared with other endemic countries and it is to be hoped that they can also be overcome to meet the global deadline.