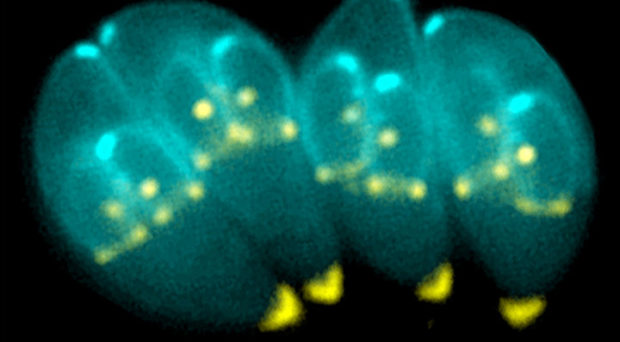 Epidemics and plagues have decimated societies since pre-historic times, but as travel has become easier, their reach has expanded, creating conditions for global pandemics such as the one we are witnessing at present. The virulence of coronavirus disease (COVID-19) has been associated with particular risk factors such as diabetes, obesity, cardiovascular problems, and asthma. However, until the publication of a recent study, the possibility that a parasitic infection should be added to this list has not been considered. The parasite in question is Toxoplasma.

About one third of the world’s population is infected with Toxoplasma gondii, a single-celled parasite that causes the disease toxoplasmosis. After an acute phase, parasites form intracellular cysts, usually in the muscles or brain.

This latent phase is generally symptomless and can last the lifetime of the host; the parasite being kept in check by the immune system.

Despite the lack of direct symptoms, infected people have been shown to exhibit a greater degree of mental and physical problems, and are prone to suffering more from a variety of diseases than uninfected people. Perhaps this is because Toxoplasma modulates the immune system to maintain its presence.

In the light of these, and other non-specific effects, a study that aimed to determine whether latent toxoplasmosis has any effect on the risk of severe SARS-CoV-2 infection and the course of COVID-19 was undertaken. The results have recently been published by Jaroslav Flegr of Charles University, Prague.

Social media was used to recruit participants; initially Czech and Slovak nationals who were members of the Facebook page Labbunnies, and then via likes and tweets they generated (a snowball method). Informed consent was given by participants, who then completed a questionnaire in three parts, of which answers concerning risk and protective factors were analysed.

Participants were asked for their age, sex, size of place of residence and number in their household. Their blood group and Rh status were requested as people who are Rh-negative are more likely to experience bad effects of toxoplasmosis.

They were also asked for their COVID-19 infection status. If they had tested positive, they were asked to rate the severity of their disease on a five-point scale and to check which symptoms they had experienced.

They were also asked whether they had ever been diagnosed with toxoplasmosis and/or borreliosis (Lyme disease).

A long list of risk and protective factors had to be checked, including well publicised risk factors such as diabetes, being overweight, coronary vascular problems and immunosuppression. Potential protective factors included taking vitamins and supplements and cold-water swimming. Ownership of a cat or dog was also included in the list as Toxoplasma can be transmitted via the faeces of infected cats.

In all, 29,345 respondents were deemed to have completed the questionnaire correctly, but only those who had had a positive or negative result from a COVID-19 test were used in the analysis.  This generated 4499 participants, of whom 786 were Toxoplasma-infected.

The effect of Toxoplasma infection

The surprising finding was that Toxoplasma-infected participants did indeed have a greater chance of being infected with SARS-CoV-2 and of suffering more severe symptoms and being hospitalised than those not infected with Toxoplasma.

Furthermore, toxoplasmosis was shown to be a greater risk factor for severe COVID-19 disease than any of the other risk factors analysed, including being overweight or having cardiovascular disease, or diabetes. Jaroslav Flegr suggests this could be a result of changes to the immune system caused by Toxoplasma infection.

Analysis of the questionnaires showed that keeping a cat significantly increases the prevalence of toxoplasmosis (24.6% in cat owners and 15.5% in non-owners).

Cats and dogs can be infected with SARS-CoV-2. In this study, keeping a cat was, by itself, shown to be a significant risk for COVID-19 infection in the Toxoplasma-infected group. Furthermore, this effect led to worse disease outcomes in participants from multimember households in the Toxoplasma-infected group. The author speculated that, in these situations, a cat could be infected, leading the householders to be frequently exposed to the virus.

Some of these had a stronger effect on one group than another. In the Toxoplasma-infected population, visits to saunas and marijuana consumption were significantly protective, whereas, taking part in sport and, to a lesser extent, taking vitamin and food supplements were protective factors in the Toxoplasma-free group.

A note of caution

The study has identified a new risk factor for infection with SARS-COV-2 and having a severe disease outcome. However, the authors warn that the participants were self-selected users of social media and unlikely to represent a true cross-selection of the population.

In addition, the findings may have been biased as participants with known risk factors may have changed their behaviour by taking additional precautions to avoid SARS-COV-2 infection. This is also so for people who were health conscious and doing sport or taking vitamins and supplements. Others in the study may not have done this. Finally, of course, those with the most severe symptoms or who died of COVID-19 would not be represent in the sample at all.

Despite these qualifications, the possibility that latent toxoplasmosis represents a risk factor for over one third of the world’s population should be investigated further.