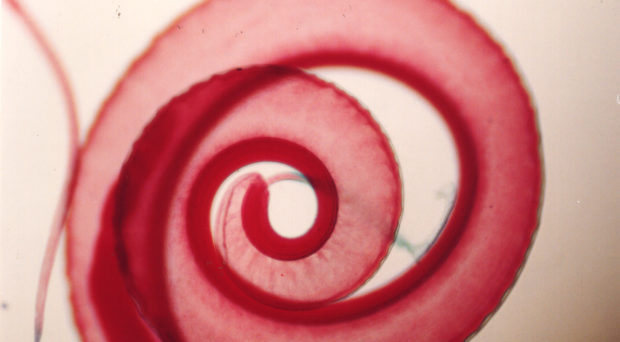 Soil-transmitted helminth (STH) infections are among the most common and widespread infections, with more than 1.5 billion people currently estimated to be helminth-infected globally, and more than a quarter of the world’s population are predicted to be at risk of infection.

These parasitic nematodes gain entrance to the host via the ingestion of soil contaminated with embryonated eggs. In the case of Trichuris trichuira, once eggs have hatched, juvenile worms grow and mature, and then migrate to the host’s caecum, where they penetrate the intestinal mucosa in order to feed on the host’s blood and tissues. In doing so, penetrating worms destroy parts of the intestinal epithelium and disrupt normal gut homeostasis.

Infection with STHs, such as Trichuris trichiura, and the resulting disturbance of the intestinal epithelium has been reported to interfere with the host’s gut microbial community (microbiome), and increase the abundance of potentially pathogenic gut bacteria.

The disruption of a healthy gut microbiome via infection with STHs opens up an interesting avenue of research, as the microbial community in the human gut has been demonstrated to play a crucial role in nutrient absorption and metabolism modulation. It also aids the development of the immune system, and is heavily involved in maintaining host health.

Investigating the interactions between helminths and the human intestinal microbiota could, therefore, lead to the development of alternative STH-infection treatments, an improved understanding of infection pathology, and possibly even provide novel treatments for autoimmune and chronic inflammatory disorders.

Hong-liang Chen and colleagues decided to investigate this interaction and characterise the differences in gut bacterial communities between helminth-infected and non-infected individuals.

Their investigation
The researchers recruited 32 mother-child pairs from Pemba Island, off the coast of Tanzania, and monitored differences in the intestinal microbiota of non-infected and Trichuris trichiura-infected mothers and children.

Initially, faecal samples were collected from each participant and scrutinised for the presence of T. trichiura. The parasitological diagnosis established that seventeen samples (11 mothers and 6 children) were positive for T. trichiura infection.

Next, to assess any differences in the composition of gut microbes between T. trichiura helminth-infected and non-infected participants, DNA from all participants faeces was extracted. From this extracted DNA, the 16S ribosomal RNA (a genetic marker useful for bacterial identification) was amplified and sequenced as a means of identifying the presence of gut bacterial species from each participant. The abundances of identified bacteria between helminth-infected and non-infected mothers and children were then analysed at the phylum and genus levels.

Microbiome differences between T. trichiura-infected and non-infected participants
The researchers found that there were significant differences between the overall gut microbial community in both helminth-infected mothers and children, compared to those that were non-infected, showing that T. trichiura infection is associated with changes in the intestinal microbiome composition. Interestingly, infection with T. trichiura appeared to actually increase gut microbial biodiversity in both mothers and children.

For example, Succinivibrio (phylum Proteobacteria) was one genus of anaerobic bacteria that showed a lower abundance in helminth-infected mothers and children, whereas those belonging to the Ruminococcaceae family (phylum Firmicutes) showed a higher abundance.

Implications of an altered gut microbial community on the host
Despite helminth-infected participants showing an increase in the biodiversity of gut microbes, the abundances of useful, beneficial bacteria were lower in helminth-infected individuals, while opportunistic and possibly pathogenic bacteria showed much higher abundances (dysbiosis).

The lower amount of Succinivibrio detected in helminth-infected children, for example, was proposed to possibly disrupt normal carbohydrate digestion, as these bacteria are involved in starch and hemicellulose degradation. The significantly lower abundance of Lactobacillus in helminth-infected children is also of interest as Lactobacillus is a beneficial bacterium that aids the digestion process, protects against pathogenic bacteria, and promotes/modulates normal immunological responses to infection.

Lastly, the significantly higher abundance of Campylobacter in helminth-infected mothers is especially alarming, as an increasing number of Campylobacter spp. found in humans have been shown to be resistant to a range of antibiotics, and as such, a global surveillance network for campylobacteriosis has been proposed.

Possible advances in therapies & control measures
The insights gained into the effects of helminth colonisation on the human gut microbiome, as well as the possible roles and contributions of important gut bacterium to the human host has led to an improved understanding of helminth-microbiota interactions, and could support the development of novel measures and transmission interruption strategies to control Trichuris trichiura, and potentially other STH, in the future.