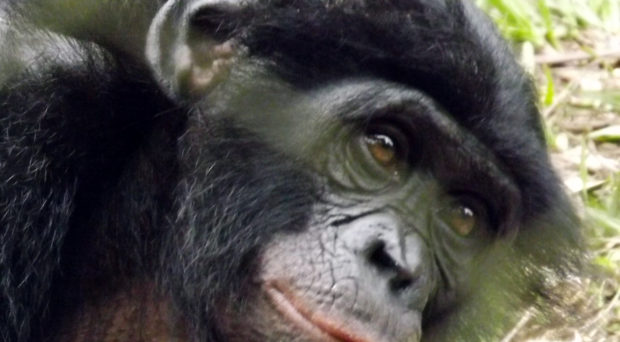 Our closest relative, the endangered bonobo, Pan paniscus, can only be found in the Congo Basin in the Democratic Republic of Congo (DRC). Their population is estimated to be between 10,000 to 50,000 individuals and they are listed as endangered with a declining population by International Union for Conservation of Nature. The greatest threats to bonobo populations are deforestation and poaching, which have increased due to civil unrest and increasing poverty in the surrounding areas. With increased human-bonobo overlap and interaction, either through negative aspects such as deforestaition but also through conservation efforts, rescues and rehabilitation, infectious diseases must be prevented both from the humans to the bonobos and from bonobos to humans, to protect all.

Bonobos are hard to study. On top of the above mentioned declining population, forest habitat, civil unrest etc, getting permissions to do invasive sampling from these highly protected animals is very challenging. So in this study researchers use faecal sample PCR screening to test for a large spectrum of potential pathogens in Bonobos. This method is non-invasive so can be authorized for research on nonhuman primates (NHPs). It can identify intestinal parasites but also through PCR can detect blood-dwelling and urogenital system pathogens as well.

Bonobo faecal samples were collected from two locations: one location was Lola Ya Bonobo, a sanctuary in Kinshasa where rescued and orphaned Bonobos are cared for and rehabilitated for release in the wild, and the other in Ekolo Ya Bonobo, the only bonobo reintroduction site in the world, situated in Equateur region of the DRC.

Researchers collected 91 faecal samples from two sites in the DRC: 75 samples came from Lola Ya Bonobo (semi-captive bonobos), and 16 samples from Ekolo Ya Bonobo (wild bonobos).

Sequences were compared to those found on the GenBank database BLAST and phylogenetic analysis of the microorganisms were presented in the research paper.  For example, using phylogenetic analysis the researchers found that the Adenoviruses grouped closely to Human mastadenovirus (HAdVs), as indicated by the name, a human virus. The nematodes species were identified as being Oesophagostomum spp and some Kinetoplastida spp in the Lola samples were identified as Trypanosoma theleiri.

One Health and Wildlife

This publication raised many questions that fall under the One Health concept:

The authors discuss the challenges of zoonotic transmission, particularly regarding the semi-captive bonobos. Might human interaction or captive conditions lead to increased incidence of infection for the bonobos? The researchers highlight how ECMV can lead to a high mortality rate from viral encephalomyocarditis in monkeys and apes, and how rodents may be reservoirs potentially explaining outbreaks in the Bonobo dormitories in Lola.

What about when these bonobos are released into the wild in reintroduction events? What pathogens may be introduced into the fragile wild bonobo population? And what could be its impact? The researchers highlight a worrying find of Human mastadenovirus in the reintroduced Bonobos.

How might deforestation and poaching increase zoonotic transmission between humans and bonobos? T. solium can cause cysticercosis and neurocysticercosis, a leading cause of seizures in humans and is contracted when people eat undercooked or contaminated meat. Could Bonobo bushmeat or overlap of humans and bonobos e.g. through deforestation or even conservation efforts pose a threat to humans?  A paper by Inogwabini and Leader-Williams in 2012 suggested that trypanosomiasis may be a factor limiting the range of Bonobo occupancy. Trypanosoma theileri found in Lola samples in this study, normally infects bovines and is prevalent in cattle.  If deforestation leads to increased cattle grazing then could the Bonobo numbers be decimated by both deforestation and disease?

Finally, what of Bonobo animal behaviour and infection/disease?  A couple of years ago I attended a Linnean Society lecture by Dr Zanna Clay, a primatologist, on what we can learn about human evolution from our closest relatives, the great apes, Bonobos and Chimpanzees, I highly recommend watching the recording! This lecture focused on behavioural traits such as communication, empathy and social structures. So, I wonder what do our closest relatives tell us about the evolution of human behaviour with regard to health, infection and disease?