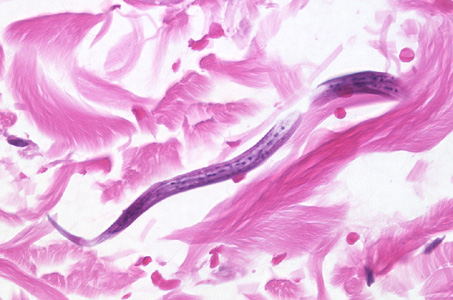 Strongyloidiasis is a disease caused by the Strongyloides roundworm. The worm is commonly known as the threadworm in the United States. Adult worms live in the small intestine and, quite uniquely, can replicate within the host. Due to this autoinfection, veterans have been found infected decades after their initial exposure. Infection in humans can range from completely asymptomatic to mild symptoms such as nausea, stomachache, coughing, and in some cases life threatening complications, particularly in immunocompromised patients. Because of the ability for autoinfection, effective diagnosis (either through culturing feces or blood tests) and treatment are very important.

Strongyloides stercoralis is the most common human species. This species can also be transmitted by domestic dogs, though their contribution to human infections is not well understood. Strongyloidiasis is common in tropical and subtropical regions and can be transmitted in temperature regions in the summer. It thrives in areas with poor sanitation and relatively warm and humid environments. Although strongyloidiasis is found in many low and middle income countries, it is transmitted in some communities in the United States. However, the true extent and burden of the disease is not well understood.

A recent survey set out to describe the gastrointestinal parasites in a community in Texas with poor access to healthcare. We’ll focus on the diagnosis of Strongyloides infections, but the researchers also looked for other parasites that could be transmitted through poor sanitation infrastructure.

The community is located in a peri-urban area and had known issues with sanitation failure. Many people rely on septic systems which can fail or back up, causing exposure to fecal matter and risk transmission of intestinal parasites. The community was ‘unincorporated’ – which in many areas of the United States means that the population isn’t serviced by any municipality. The community has reached out to the researchers to help gather data to apply for sanitation improvement grants.

A total of 92 households were enrolled in the study, encompassing 404 individuals. Among these, around 40% participated in a household survey and gave information on sociodemographic and health histories. History of diarrheal, respiratory and dermatological disease was recorded. In addition, information on wastewater and drinking water systems were collected from these households, in addition to any problems they had experienced (flooding, back up).

In addition to the survey questions, residents were also invited to participate in blood and/or stool collection. More participants agreed to give blood (n = 97), compared to stool (n = 43), which is not unusual. Stool samples were used to extract DNA and look for infections of Strongyloides stercoralis but also other intestinal parasites, including  Cryptosporidium species, Entamoeba histolytica, Giardia lamblia, Necator americanus, and Trichuris trichura. Blood samples were used to detect IgG antibodies to S. stercoralis. The test is highly specific, but can’t differentiate someone actively infected with threadworms with someone who had previously been infected.

The household survey revealed that almost a third of households had problems with their septic tank system. Additionally a third of participants reported diarrhea in the past year. Surprisingly, 16.5% of the blood samples were seroreactive to S. stercoralis.  Although some of these people that tested positive had traveled to an endemic country outside of the United States, this was not a risk factor associated with infection (the same proportion that tested negative had travelled as well). Some individuals had never travelled, suggesting that transmission is occurring locally. The researchers also found that infected individuals were more likely to be in a household with a low income (<$2000 per month). Other factors, such as flooding or household septic failures did not explain risk.

This study reports the highest prevalence of S. stercoralis antibody ever recorded in the US. However, the sample size is low. High prevalence has been recorded in some communities in Alabama and institutionalized people. Together these studies suggest threadworms are underreported in the US. There is an opportunity for increasing awareness of this disease within the community and the health care providers for this community and similar communities. There is a need to increase diagnostic effort to identify and effectively treat these diseases, particularly given the high prevalence.

Intestinal parasites are important to address in public health. They often disproportionately affect young children, particularly in marginalized communities. They cause serious damage to physical and cognitive development, but are entirely preventable and treatable. It is essential to raise awareness of these infections wherever they occur and address the underlying causes that allow them to thrive.