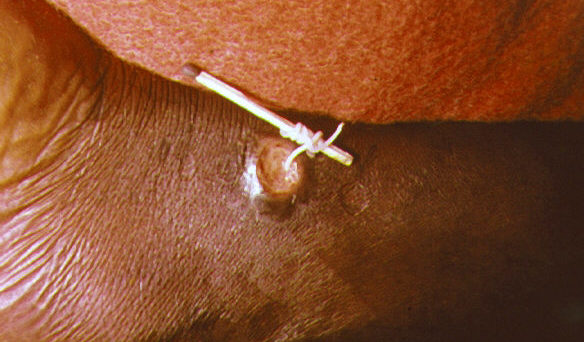 Extracting a Guinea worm from the ankle by wrapping it around a stick. Credit: Public Health Image Library/1968

In the same week that the latest WHO  Neglected Tropical Diseases report was published (featured in our blog last Friday), the Carter Foundation made two very encouraging announcements concerning Guinea Worm eradication.

Known as dracunculiasis, Guinea worm disease is caused by the round worm, Dracunculus medinensis. Infection occurs when water fleas, infected with the larval stages of the worm, are accidentally ingested. Males fertilise females and then die, but females begin to grow and, after many months, migrate to the extremities of the body, particularly the feet and legs.

Here, the meter long, gravid, worms curl up and form an extremely painful blister. The resultant burning sensation causes the host to submerge the limb in cool water. Here, the tip of the female emerges from the blister and releases eggs into the water. The parasite’s life cycle is completed if the eggs are ingested by water fleas, grow into larvae, and are then swallowed by another host, whilst they are still inside the water flea.

Guinea worm infection results in several symptoms including fever, rash and sickness. Removal of the worm can result in complications such as sepsis. The painful blister causes lack of mobility and subsequent loss of earnings.

Known since ancient times, it is still cured today by slowly winding the worm round a stick.

In 1986, when the Global Guinea Worm Eradication Program was established, dracunculiasis was endemic in 21 countries in Africa and Asia, with about 3.5 million cases occurring annually. By 2013, my BugBitten blog reported that things were looking good for the eradication program, with no new cases reported in January that year. However, the discovery of Guinea worm infections in dogs in Chad was very worrying. Dog worms were found to have the same genetic structure as those in humans (as discussed in Krisztian Magori’s BugBitten blog), so dogs could act as a reservoir for the parasite.

The first of two pieces of good news just reported by the Carter Foundation is that, in 2020, the number of human cases fell to just 27 worldwide. This is a drop of 50% since the year before, despite the logistical problems caused by the Covid-19 pandemic. Chad and Ethiopia had the majority of cases, with only one case reported in each of South Sudan, Angola, Mali, and Cameroon. In addition, infections in animals fell by 20%. 1570 cases of animal infections were recorded, with cats and baboons, as well as dogs, infected.

Rather than requiring a vaccine or expensive pharmaceuticals, infection control has been achieved by a program of education, filtration of drinking water to exclude the water fleas, protection of water sources and surveillance for new infections.

The program has been almost entirely operated by a combination of paid local staff and volunteers in villages. The Carter Foundation works closely with the World Health Organization, U.S. Centers for Disease Control and Prevention, UNICEF, and many other partners, and it has been supported by generous foundations, corporations and governments. For example, Vestergaard’s LifeStraw donated 520,000 drinking straw filters to the Carter Center to be used by individuals whose only source of drinking water could be contaminated.

This leads me on to the second piece of good news reported last week.

Substantial renewed support of $10M for the Carter Center’s Guinea worm eradication programme has been announced by His Highness Sheikh Mohamed bin Zayed Al Nahyan, Crown Prince of Abu Dhabi, following the 30th anniversary of the organization’s partnership with the United Arab Emirates. More can be learnt by watching this video.

The Carter Center was founded in 1982 by former U.S. President Jimmy Carter and former First Lady Rosalynn Carter, in partnership with Emory University, to advance peace and health worldwide. It is a pioneer in the global fight against neglected tropical diseases.

Elimination of the final cases of a disease is the most challenging aspect of a project. The target for Guinea worm eradication is now set at 2030. Let us hope this is achieved.