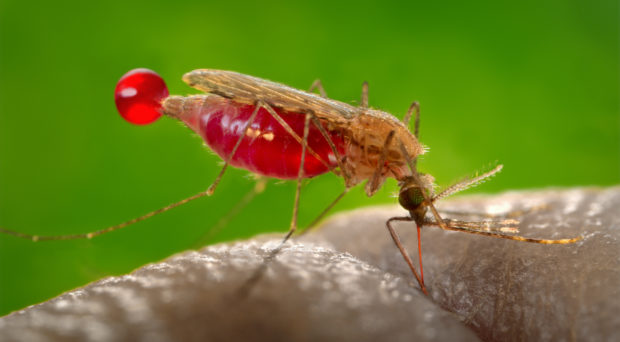 Plasmodium parasites, the causative agents of Malaria in humans and animals, are well known for manipulating both their human and mosquito hosts as a way of maximising the probability of interactions between them, thereby increasing the chance malaria parasites are transmitted from host to host. One way in which these devious parasites have been shown to increase the probability of host interaction is during their transmissible (gametocyte) stage.

This is achieved by inducing host red blood cells to produce volatile compounds that attract malarial vector species, such as mosquitos in the Anopheles family.

The increase in production of volatile compounds, such as certain aldehydes and terpenes, by host red blood cells was shown back in 2017 to be specifically induced by a gametocyte-produced molecule called (E)-4-hydroxy-3-methyl-but-2-enyl pyrophosphate, also known as HMBPP.

Research published in 2017, and conducted by Ingrid Faye’s group, discovered that when given a choice between uninfected blood and uninfected blood supplemented with HMBPP, 95% of blood-seeking mosquitos were attracted to the HMBPP supplemented blood. This finding (among others) demonstrated the way blood dwelling malaria parasites directly and indirectly manipulation their host’s odour profile to enhance their chance of being transmitted.

You can read more about HMBPP and these research findings in a previous article on BugBitten.

Up until recently though, the extent to which malaria parasite-induced volatiles influence the attractiveness of humans to anopheline mosquitoes had not been evaluated in the field, nor had HMBPP’s ability to attract mosquitoes in the absence of human odour. Therefore, a recent paper by Debebe and colleagues in BMC’s Malaria Journal set out to test the efficacy of a HMBPP-induced odour blend in attracting wild female mosquitos in the natural environment.

The odour blend was made up of several aldehydes and terpenes in ratios that were intended to mimic the ‘natural’ odours induced by HMBPP, released from gametocyte-infected red blood cells, in a malaria infected person.

Assessing the attractiveness of the HMBPP-induced odour blend

To test the concoction of mosquito-attracting odours in the field, researchers chose Arba Minch Zuria, one of the most malaria-infected districts in southern Ethiopia. Anopheles arabiensis and An. pharoensis are the primary mosquito species responsible for malaria transmission in this area.

The experiments consisted of a two-choice behavioural assay, comprised of a tent with or without a human volunteer (as a source of human odour), and two pipes emanating from each tent (to carry the odour) that extended to two different Host Decoy Traps (HDT). These HDT (used to trap any attracted mosquitoes) either contained the HMBPP-induced odour blend or heptane (acting as a control).

In addition to these findings, the researchers showed that when the HMBPP-induced odour blend was combined with human odour, it attracted significantly more An. arabiensis mosquitoes and caught almost twice as many when compared to the HDT control (HMBPP-induced odour blend and heptane). This “differential augmentation”, as the authors refer to it, is also seen with patients infected with both P. falciparum and P. vivax gametocyte stages.

Based on these results, the authors concluded that production of HMBPP more than likely underpins these observed increases in malarial-vector attraction to individuals with a gametocyte stage infection, and that the odours induced by gametocyte stage parasites in red blood cells greatly manipulate the host-seeking behaviour of malarial-vector mosquitoes, and therefore substantially increasing the efficiency of malaria transmission from host to host (vectorial capacity).

This study by Debebe and colleagues builds on previous laboratory-based research and is the first to demonstrate these outcomes under field conditions. These results are not only fascinating but also have implications for integrated vector management, and could provide novel methods to survey and control mosquitoes. One such application is to combine HMBPP with eave tube technology. The authors suggest directing human odour- laden air out of houses, through tubes embedded in the eaves, so that this air is guided to HDTs supplemented with the HMBPP-induced odour blend to effectively redirect blood-hungry malarial vectors to the traps.

Although this would provide a cost effective and easily reproducible vector control measure, the authors note that one remaining challenge is to develop a long-lasting HMBPP-induced odour blend formulation. It will be interesting to see whether research yet to come can achieve these future objectives and succeed in creating a novel vector control and management tool.