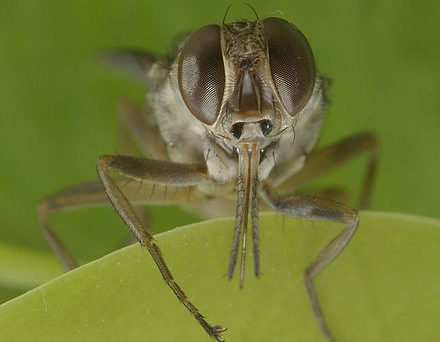 With the COVID-19 pandemic raging across the globe, it’s easy to forget about the many other infectious diseases, some of them transmitted by insect vectors, which are still around infecting people. While we fight the pandemic, and try everything to keep our societies going until we can get this disease under control, we keep emitting CO2 and other greenhouse gases, which continue warming our atmosphere and changing our climate. The impact of climate change on infectious diseases, including vector-borne diseases, has long been demonstrated but there are still many aspects that we’re trying to understand in these complex relationships. As usual, there are no simple answers, and every system responds differently to climate change, which is only one of many factors impacting them.

A recent paper by Elisha Are and John Hargrove noted that tsetse flies (Glossina spp) cannot tolerate extreme cold nor extreme hot temperatures, highlighting a possible benefit of climate change as warmer temperatures might reduce the range of this and other vectors. Dr. Hargrove has spent a lifetime studying and modeling the life cycle of tsetse flies  and how best to control them. Glossina tsetse flies are, among other things, the vector of Trypanosoma parasites that cause sleeping sickness in humans and the similar disease “nagana” in livestock. Tsetse flies and the disease they cause are difficult to control, and have devastating human health and economic consequences. Fortunately, it looks like tsetse flies have a fairly limited range of optimal temperatures, outside which they rapidly go extinct. In recent decades, both tsetse flies and sleeping sickness have been significantly reduced in the Zambezi Valley of Zimbabwe, associated with significantly increased temperatures. Phelps and others in the 1960s and 70s have conducted pioneering experiments that showed how life history parameters such as daily adult mortality, pupal mortality, pupal duration and inter-larval period varied with temperature in the lab for Glossina m. morsitans.

In the above mentioned paper, Are and Hargrove incorporated the results of those laboratory experiments to determine how the expected number of surviving female offspring per adult female, the expected growth in the number of adult females per generation, and the daily growth rate of a population changes with different constant temperatures.

Using these measures, they also determined the probability of extinction and the expected number of generations to extinction with different number of females in the initial population. They found that the highest number of surviving female offspring per female was produced at about 19 °C, while less than 1 surviving female offspring was produced both below 16 °C or above 31 °C, indicating a population that would not be sustainable. The tsetse population was expected to grow exponentially at any temperature at or above 20 °C, but at a slower and slower rate as temperatures increased. The daily growth rate was highest at 25 °C, and decreased dramatically both in extreme cold (15 °C) and in extreme hot (31 °C) conditions. In parallel, extinction was certain both below 15 °C and above 31 °C, and took the longest at moderate temperatures (around 17 °C) when the initial population size was low.

The study certainly highlighted the extreme temperature sensitivity of Glossina m. morsitans, and suggests that the increasing frequency of extreme temperatures due to climate change has the potential to limit the range of these flies and their parasites. While this is welcome news, it also means that some areas of Africa, that were hitherto unsuitable for tsetse flies due to extreme cold temperatures, might become suitable to sustain their populations, as has happened with Anopheles mosquitoes and malaria in the Kenyan highlands. The authors also warn that their study does not incorporate fluctuating temperature conditions, or the impact of other anthropogenic and environmental factors on tsetse fly survival and parasite transmission.

While climate change might limit the distribution of tsetse flies and help us control sleeping sickness, it can have the opposite effect on Zika virus transmission in temperature regions as shown by another recent paper. Zika virus is a flavivirus transmitted by mainly Aedes mosquitoes between people, and can (among other things) cause congenital Zika virus syndrome, including microcephaly, in the developing fetus. The large Zika virus epidemic in 2016 was mainly concentrated in tropical regions of Asia and the Americas, but many competent mosquitoes, such as Aedes albopictus, have spread across both eastern North America and Europe.

Recently, a group of researchers across both academic institutions and government agencies in the UK have assessed the potential of various species in temperate regions to transmit Zika virus from Brazil at a range of temperatures in the laboratory. They collected and reared both Ochlerotatus detritus, Culex pipiens pipiens and Culiseta annulata mosquitoes from the UK, as well as recently colonized Aedes albopictus from Rome. They fed all female adult mosquitoes blood meals containing Zika virus, and assessed their mortality and competence at six different temperatures between 17 °C and 31 °C up to 28 days post-infection, both in their saliva as well as in their bodies. They also used a cytopathic assay to test if ZIKV detected in mosquito samples is infectious. Then they used these results to estimate EIP10, the extrinsic incubation period measured at the time until 10% of infected mosquitoes become infectious for a given temperature, which they then incorporated into a standardized basic reproduction number for ZIKV. Finally, they mapped how this standardized basic reproduction number across the globe using climate data for the 1980-2010 average as well as for future projections under different scenarios, and estimated the length of the transmission season for each location and scenario.

Their findings are interesting. First, they observed that, while Culex pipiens pipiens and Culiseta annulata were not competent vectors, both Aedes albopictus and Ochlerotatus detritus were positive for Zika virus at all temperatures 19-31 °C, but not at 17 °C. The earliest time point of detection decreased with increasing temperatures, such that Aedes albopictus was already positive 7 days after post-infection. EIP10 decreased with increasing temperature for both species, suggesting faster viral replication in warmer conditions, but in general it was shorter for Aedes albopictus compared to Ochlerotatus detritus. ZIKV titer was 3.8 times higher in the saliva of Aedes albopictus than in the saliva of Oc. detritus, suggesting that it is a more competent vector. Cytopathic assays showed that Aedes albopictus mosquitoes reared at 19 °C contained infectious virus. They found that the standardized basic reproduction number was highest around 29.2 °C.

The map of annual mean standardized basic reproduction numbers based on observed rainfall and temperature data was in good agreement with the known distribution of Zika virus transmission, suggesting a low probability of a large Zika outbreak e.g. over southern Europe, despite the presence of the vector. However, future projections of climate change indicate increasing annual mean standardized basic reproductive number in many locations across the globe, increasing with the severity of emission scenario and with time, with the largest changes under the RCP8.5 scenario in the 2080s. In particular, large increases are predicted in the Mediterranean and southern and eastern Europe, with ZIKV transmission season increasing to six to seven months. In the UK, while no ZIKV transmission was projected under current conditions, a short seasonal transmission was possible over the southern part of the country in the 2080s under the RCP8.5 scenario. ZIKV transmission was also projected to extend north in the US, as well as in Asia. In tropical regions, Aedes albopictus is not the main competent vector, and therefore its impact is limited, but increased temperatures could lead to increased ZIKV transmissions in high altitude regions, and decreased transmission in areas experiencing extreme high temperatures.

The two studies highlighted above provide two examples for how climate change can have potentially very different effects (contracting distributions for tsetse fly, while expanding distributions for Zika virus) in different model systems at differing geographic scales. They remind us that blanket statements, such as that “climate change will increase infectious disease risk in general”, are suspect, and that we need to invest in the long and painstaking work that these authors undertook to really understand the impact of climate change on each infectious disease one by one, or else we will make incorrect assumptions. These studies also demonstrate how mathematical and statistical models can be used to synthesize information gathered in the lab to generate meaningful and reliable predictions, but that such models would be of no use without the enormous work and data generated in those experiments. We are already experiencing climate change, and it’s impacts on infectious diseases. We’re quickly running out of time to undertake the enormous work to investigate each disease system one by one, and we need these kinds of collaborations between experimental and quantitative scientists more than ever. Finally, while the two papers above focus on the effect of temperature on these vector-borne diseases, we ought not forget that there are many other factors impacting these disease systems, foremost of all our own anthropogenic impacts.

Editor at BugBitten
Krisztian is the Assistant Professor of Biostatistics at the Department of Biology at Eastern Washington University. He is a disease ecologist, interested in the complex relationships between hosts, vectors, pathogens, and their biotic and abiotic environment. You can also follow his writing on http://kmagori.weebly.com.